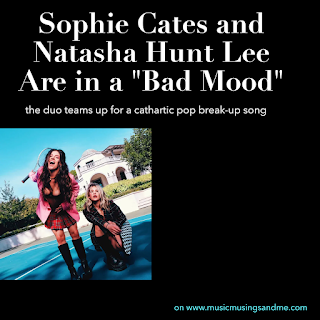 I've been a fan of Sophie Cates for a few years now after absolutely loving her first song to really gain traction, "Drinking Games." Back then, Sophie used to release music under the stage name Silver Sphere, which is her handle on Instagram to this day and still what she's listed as on Apple Music. Though she's still in the process of rebranding, this song marks a step forward for this new chapter of her artist career. This song comes between her work with her boyfriend, Lauv, on his new album coming out in August and getting ready to leave for a European run with Jeremy Zucker in July.

"Bad Mood" comes as a collaboration with an artist even newer to the scene than Sophie, Natasha Hunt Lee. Natasha started releasing music just this past year and has spoken to Wonderland about how this new single is a stop on the way to a summer EP called The End of the World. Though her journey into releasing music started relatively recently, she joins the likes of Fletcher and Maggie Rodgers in coming from the Clive Davis Institute at NYU. In addition to solidifying her sound over the last few years, she's grown her LA based clothing company, Where, since 2017. The brand features a line of shirts and hats printed with famous LA street names like Beverly, Figueroa, and Melrose.

The duo crafts a dazzling summer break-up song that is the perfect sarcastic, frustrated track to let out your anger to but also has a fist-pumping joy in its sonics that makes it perfectly at home on a pool party playlist. Throughout "Bad Mood," Sophie and Natasha trade lines about a partner that is sucking the life out of them and constantly putting them in a bad mood with mind games and rude comments. The bridge turns the tables for the final chorus as Natasha sings about finally choosing to not clean up this person's spilled guts. Instead of taking on their negative emotional energy, she walks away from the situation so that the other person can be stuck with a bad mood all by themselves.

"It's 6AM / I cried all night again," Natasha and Sophie sing in the cathartic chorus in a way that makes you want to jump up and down or toss your hair around. The song does a great job covering how exhausting it is to try to keep a draining person happy. While some of the phrases waffle into cliche or trite territory, the song does a good job creating an atmosphere you want to dance and let go to, and the stabbing remarks slipped in keep the song funny and entertaining. With the wail of the last electric guitar note, Natasha asks, "Sophie, was that too mean?" which leads them both to dissolve into giggles to conclude the song. It's a sweet, human touch that helps solidify the message of the song.

The new song also comes with a music video, directed by Hunter Moreno, featuring both Natasha and Sophie running around a well manicured mansion. They dance up an opulent double staircase, swing tennis rackets around on the basketball court, and sing their frustrations into the camera. The video ends with Sophie and Natasha getting elaborate nail designs from Instagram nail artists 1-800-NailMe. The video is fun and full of the same free, relieved energy as the song, and it looks like they had a blast making it.

I'm excited to see where both of these young pop artists go next as they continue releasing music and have the time to further solidify their messages and identities as pop stars.

Music Not to Be Missed in May

Did My Harry's House Predictions Stack Up?