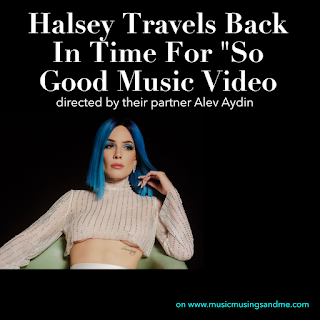 The second Halsey announced that the music video for "So Good" was shot by her partner, Alev, I knew it would be spectacular. Not only are his photos some of the best of Halsey, but it promised that the video would come from the hands of someone deeply invested in the project. Halsey crafts mini movies out of every video she produces, so it's no surprise that the video for "So Good" followed suit, putting visuals to a story Halsey fans have come to know well.

The song tells the story of falling for your best friend at exactly the wrong time and pushing your feelings aside in the moment before later regretting it. In the chorus, Halsey laments how he's probably happy with his current girlfriend and hasn't given her a second thought in the years they've been apart. After being spurred on by her best friend and manager, Maria, getting married, she makes the grand move to try to right the missed chances and save the one who got away. The rest is history as she learns that he's felt the same way all along, allowing them to be "so good" together.

The longer version of that love story is that Halsey and Alev met back in the Hopeless Fountain Kingdom era in when Alev was tasked with writing and directing a film about Halsey's life. The biopic got a Deadline announcement in 2018 that it was in development by Sony, but nothing ever came of it. In Halsey's words, the film never materialized, "bc alev was supposed to be writing it the past three years and we slowly fell in love instead. you know the rest!" Now, though, we have a small slice of what that movie might have been in the "So Good" music video.

The video opens with Halsey and Alev on the set of the movie that never was. Halsey is in a director's chair, wearing a sweater vest, ready to oversee a new scene. Alev is standing on the sidelines looking on as well when Halsey announces something isn't right and walks up to the set. It's quickly apparent that the set is a recreation of Halsey's dressing room on the Hopeless Fountain Kingdom tour with replicas of the show's costumes hanging in the back and an actress playing 2018 Halsey in a blue wig and one of her iconic white and crystal costumes sitting at the make-up vanity. An actor playing Alev videos her from behind on a bulky film camera.

As the chorus kicks in, we warp back in time as Halsey, now dressed in the same HFK tour outfit laments the missed opportunity. It's intercuts with quick flashes of what could be – clips of Halsey and Alev kissing from the end of the video. At the start of the second verse, Halsey from the past starts to take action, materializing in a version of Alev's apartment where he's asleep on the couch with the other girl she references in the song. Supernaturally, this girl levitates off his body as Halsey places a Samsung projector on down on the coffee table in a move of far from subtle product placement.

The projector starts up, and Halsey gets to show Alev a glimpse into the future at exactly what could be. It starts with a clip of Alev and Halsey in the exact scene replicated at the start of the video before giving way to glimpses of Halsey around the world, as shot by Alev. Eventually, we progress in time to Halsey cradling their son, Ender, in her arms. It's an incredibly moving montage, and as the camera looks back, real Alev is replaced by movie Alev, and Halsey takes off to solidify her happy ending.

As she rushes towards Alev from behind the scenes of the movie, the shot cuts back and forth between HFK and present day Halsey, showing the worlds starting to merge together. When they meet, they fall into a passionate kiss as the camera spins around them, and when that scene ends, we head back to director Halsey who is finally ready to call "action" on the righted scene.

The video is incredibly sweet and perfectly captures the feeling of running back through time to catch the one that got away. It's heartwarming, and they're all just adorable together, Ender included. I'm so glad that Halsey finally got to share their love story and that the song is out in the world, after a bit of fighting with Capitol on the matter.

If you want to hear my thoughts on the song itself, I posted a video breaking down all the lyrics on my YouTube channel that you can go check out!

May Song Round Up

Checking on my Harry's House Predictions

Artists of the week Halsey Music Videos What's In my Earbuds