June 23, 2022
There have been so many tours announced and going on sale this week that it's getting hard to keep up. Every day at 10AM, I've rushed from one presale to another on a quest to fill out my fall concert line-up with all my favorite artists. Some I'll be seeing for the second or third time while others (like Conan Gray) I've waited years for the chance to see live. With the general sales coming up on Friday, I want to round up four must see shows on sale this week so they don't get lost in the windfall of new tours and music dropping this week. Also, I'll give you my ticket buying tips and let you in on what I learned about each sale when I grabbed presale tickets! 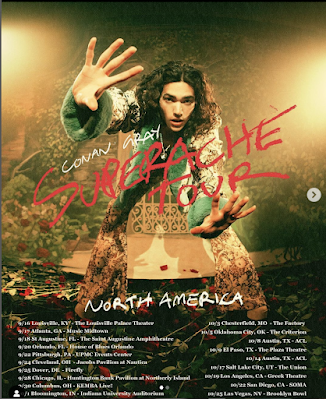 After going on an North America and Europe run for the Conan Gray World Tour last fall, Conan is heading back on the road in mid-September to play a number of US cities he missed on the last run (notably Los Angeles) as well as progress from theaters into outdoor amphitheaters proving how much his star has continued to rise. Once this brief US run, which excludes the East Coast, finishes in late October, Conan will head to Australia and New Zealand for the first time since 2020 for a handful of shows. Even though I've been a fan for two and a half years, this will be my first chance to see Conan live.
Opener: TBD
Highlight of Cities: Orlando, Florida; Coraopolis, Pennsylvania; Bloomington, Indiana; El Paso, Texas; Salt Lake City, Utah; Los Angeles, CA; visit Conan's website for a full list of cities
Is There VIP?: Yes! There are 2 VIP packages for sale. The first and more expensive package is the Conan Gray VIP which includes a moderated Q&A, a GA or ticket in the first 12 rows, a custom candle, notebook, and bookmark, a signed laminate, and early entry to the venue. The Superache VIP offers the same perks without the Q&A with Conan. Neither package offers meet and greet.
What's the Prices?: That really depends on your venue! In LA, I got my Conan Gray VIP ticket for $219 before fees and then paid an additional $30 of fees (which is a discussion for another day). Based on what I've heard from friends of mine, this seems to be the typical price, though I did see a few fans who got VIP for $220 with fees and then all the way up to over $300 as well. As for the rest of the sections in general ticketing, AXS advertises that tickets in LA will range between $29.50 and $69.50 depending on the section and $34.99-$75 in Columbus, Ohio. On Ticketmaster in Florida, tickets are currently going for $330 in the first rows and $50 in the back of the venue. Like with all sales, expect prices to (sadly) fluctuate based on demand, and prices will likely be higher than posted.
My Advice: Beyond the ephemeral ticket buying best practices, you can give yourself a leg up with this tour by deciding ahead of time whether you are hoping for VIP or standard tickets because with many of the dates, you will have to choose to view either the VIP or standard tickets. If you'd like to view both options at once, grab 2 ticketing accounts and devices to compare pricing and availability.
Also, don't get discouraged! When buying tickets for amphitheater shows as opposed to GA, tickets will evaporate fast. Don't get too frustrated if the first few seats you try to secure give you an "Oh No!" message. Keep clicking new seats quickly, and eventually, you'll catch one. Have a plan about which sections you prefer and build in a plan A, B, and C as options change rapidly during the sale.

Girl of My Dreams Tour

Fletcher has recently started teasing that her debut album is on the horizon and announced a new single out June 24th (this Friday!), "Her Body Is Bible". While the album itself hasn't been announced, it likely will be soon. I had the chance to see Fletcher on her last tour in the spring, and I highly recommend making the effort to see her. She has spectacular vocals, entertaining dancing, and a great connection with the crowd. If you'd like a preview, you can watch my last tour vlog or read my concert diary. The tour will start with a smattering of festivals and a handful of Australia and New Zealand dates in August before starting in the US in October. The tour will pause for the winter after the LA show in mid-November before continuing in Europe in February of 2023.
Opener: Vérité for Orlando through NYC and Chappell Roan for Pittsburg to LA
Highlight Cities: Newstead, New Zealand; Fort Lauderdale, Florida; Charlotte, North Carolina; Montreal, Canada; Wilrijk, Belgium; full list of dates on Fletcher's website.
Is There VIP?: Like with Conan's tour, there are 2 separate VIP packages. The first offers a meet and greet and photo op experience for the first time for Fletcher since COVID. It also includes a soundcheck, signed laminate, early entry, and a VIP exclusive dream journal. The second VIP package offers everything except the exclusive meet and greet time.
What Are the Prices?: Fletcher is playing large theaters now, and the prices have risen slightly as they tend to with each venue size upgrade. In LA, before fees, GA tickets were $35, Early Entry VIP was $109, and the Meet and Greet VIP was $159. In Florida, the Early Entry VIP was listed for $99 which was consistent with Salt Lake City.
My Advice: If you're on the fence about the VIP package like I was, do yourself a favor and make up your mind before the sale starts. I sat there questioning the purchase for 20 minutes until all the Meet and Greet packages were gone. While I ultimately decided against that route, I wouldn't have had the choice if I'd ended up with my heart set on it. With the chance to price research, try to be decisive during the sale. 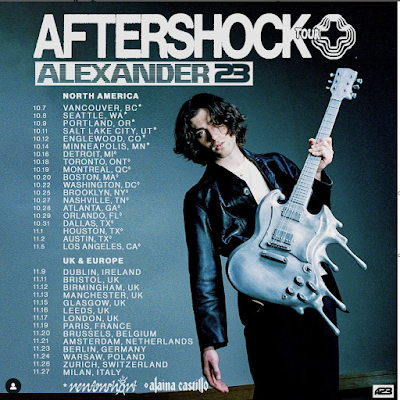 It wouldn't be fall in LA without an Alexander 23 show. This time, Alexander is hitting the road, following his run opening for John Mayer, to promote his debut album, Aftershock. While the album is out in July, the tour will kick off in October in Vancouver for the North American run and November 9th in Dublin for the European leg. Alexander is a truly transcendent live performer and is both talented and wonderfully kind to fans. You can check out my vlog from both his LA dates last year or my concert diary if you need more convincing.
Opener: Renforshort for Vancouver through Minneapolis and Alaina Castillo for Detroit through LA
Highlight Cities: Vancouver, Canada; Brooklyn, New York; Austin, Texas; Zurich, Switzerland
Is There VIP?: Of course! Like with everyone else, there's a Meet and Greet VIP as well as an Early Entry VIP. The VIP Meet and Greet package has a photo with Alexander, access to sound check, a GA ticket, and a signed lanyard. For the Early Entry, you'll get everything listed except the meet and greet and sound check.
What Are the Prices?: Thankfully, Alexander seems to have constant pricing, at least across the VIP options. The Meet and Greet Package is $100 while early entry comes in at $65. GA tickets seem to range between $25 in Salt Lake City and $29 in New York. 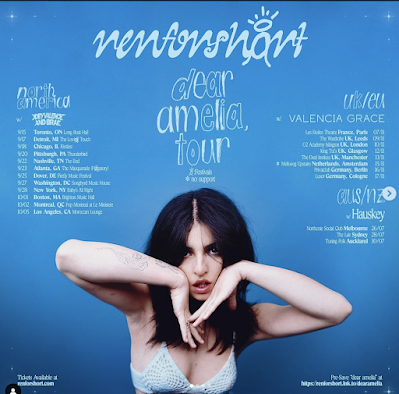 While I was sad when I saw Renforshort wouldn't be opening for Alexander 23 in LA, that didn't last long because Renforshort announced her own tour for her debut album, Dear Amelia, which is out in a few weeks. Since Renforshort is the newest artist on this list, she's also playing the smallest venues, which I always find the most exciting. In LA, she'll be at the Moroccan Lounge in October. Her tour will span North America, UK/EU, and Australia and New Zealand.
Opener: Joey Valence and Brae for the US, Valencia Grace for the UK/EU, and Hauskey for New Zealand/Australia
Highlight Cities: Nashville, Tennessee; Boston, Massachusetts; Glasgow, United Kingdom
Is There VIP?: There is no VIP for this tour.
What Are the Prices?: The prices are around $20 or lower for a GA ticket depending on the city.
More on Music, Musings, and Me:
Lorde at the Shrine Concert Review
Alexander 23 Announces His Debut Album
Halsey Shares Love for Alev in "So Good" Music Video
Alexander 23 Artists of the week Conan Gray Fletcher Music News renforshort