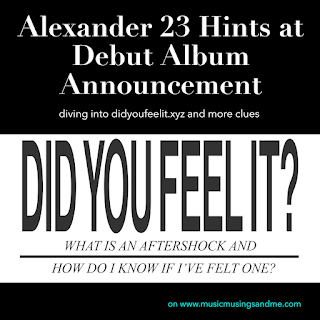 Alexander 23 has been teasing songs and working on his debut album for more months than I can count now. Being a fairly transparent artist online, fans have watched this album slowly come to life over sessions with producer Dan Nigro, late night production sessions in Alexander's home studio, and tragically losing song files to corrupted hard drives. Lately, Alexander has been teasing an upcoming tour and an album announcement. Still, the official word of the debut album is slow to come as he's released three singles so far ("Hate Me If It Helps," "Crash," and "The Hardest Part"), and he's currently on a UK tour opening for Tate McRae. Now, nearly all of his social media posts evoke a flood of "announce the album" and "when's the album" comments. It seems an announcement is finally on the horizon.

Today, Alexander posted teaser clips to Instagram and Twitter leading fans to a website called www.didyoufeelit.xyz. This comes in tandem with an announcement of a new social platform for Alexander, Club 23, and a very ominous tweet announcing, "today is a big day." That's been followed by Alexander changing his profile picture to an ominous cross-like image and archiving his entire Instagram feed.

today is a big day

Focusing on the website, the static page shows the same melting guitar teaser clip at the bottom, but the text above it offers a hint at the contents of the debut album. Following the giant letters that read "DID YOU FEEL IT" comes a tagline that reads, "What is an aftershock and how do I know if I've felt one?"

The concept of Alexander's debut album seems to play on the aftershocks of an earthquake, in this case more emotional than physical, but if feels like an apt metaphor for those of us who live in LA. The website offers a definition of an aftershock in a more emotional context. "Aftershocks are smaller events that occur in the same general area during the days to years following a larger event or "main shock." Though not as powerful as the initial event, the effects of an aftershock can be long-lasting and unpredictable -- including fragility, high levels of instability, and never-ending heartbreak. Aftershocks interact with each other by changing the state of stress in their surroundings, causing instantaneous decay even with a growing distance from the time of the main event," the website reads in part.

The final message places a great emphasis on the word Aftershock, which is likely the album title. It concludes, "Aftershock is a collection of various events following an initial moment. Did you feel it?" The symbol from Alexander's bio seals the introductory letter. Everything seems packaged and ready to go for the album's release including vinyl pressings and signed CDs, so the album could be upon us at truly any time.

This title and concept makes perfect sense with the 3 songs we've heard so far. "Hate Me If It Helps" is a song about wanting to help your ex through a break-up while still feeling bitter yourself. "Crash" covers the first steps of healing in realizing that even if you still love someone, you don't love the relationship anymore. "The Hardest Part" tackles a different kind of aftershock reflecting on the small moments of grief that pop up after losing someone in your life. All three of these songs fully represent these reverberations that Alexander describes on the web page. I'm excited to see where else this aftershock concept goes.

To stay up to date on the latest Alexander news and receive extra perks, it seems that Club 23 (@club23official on Instagram) is the place to stay up to date now that Alexander has, at least temporarily, wiped his own page. He's mentioned that those who follow that account could have a chance to receive the new single early. Hopefully, the album comes out extremely soon because everyone is absolutely on the edge of their seats waiting to learn more.

UPDATE: Alexander has announced that his debut album, Aftershock, will be out July 15th! And he'll have a new single, "Somebody's Nobody" is out next Friday the 24th.

Halsey Shares Love Story with Alev in So Good Video

May Music Not to Be Missed