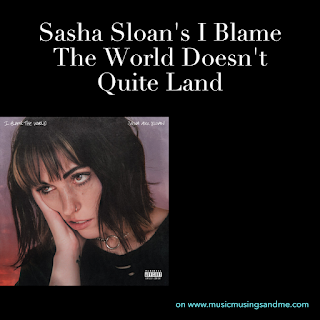 Sasha Sloan has been one of my favorite artists since I started following her in 2019 when her Self Portrait EP came out. I was immediately captured by her blatant honesty in discussing imperfect family dynamics, depression, existential confusion, and not fitting into the glitzy side of LA. Her music had a raw, aching edge that created an immediate bond between her and the listener, and she painted gorgeous, and sometimes sarcastically hilarious, images. On her debut album, Only Child, both her production and lyrics grew a bit stilted and over polished, but she still manages some genuine insight and emotional moments that felt entirely unique. Unfortunately, I Blame The World stumbles in grasping on to anything that feels new, original, or innovative for Sasha. Too many of her songs fall into the same basic formula that leaves her cynical honesty feeling trite.

Her original EPs contained songs that delved into intense and difficult topics with open arms and wide eyed honesty. It felt like Sasha was willing to bluntly yet poetically say what everyone else was thinking. On her first breakthrough song from 2018, "Older," she delves into the sometimes crushing reality of being able to look at your parents through the lens of being an adult yourself singing, "The older I get, the more that I see, my parent's aren't heroes, they're just like me." She learns to forgive their imperfections in seeing them as people for the first time. In a funnier turn of events, on "At Least I Look Cool," over a stuttering beat, Sasha tells the story of going out to a fancy party in Malibu even though she feels awkwardly out of place. She plays the game to get the perfect post for Instagram. While she feels like a fraud and doesn't even like herself in the moment, she goes along with the status quo and is able to expertly make fun of herself and everyone around her. There's a sharp wit that is the undertone for all of her early releases.

While her debut album mellowed, it kept up similar levels of introspection and themes. She addresses her past self on the emotional closing track "High School Me" and reflects on the complete shift of world view that comes as you lose the wonder of childhood on "Santa's Real." Songs like "Hypochondriac" and "Is It Just Me?" stand as precursors for the bulk of her sophomore album. She invents the formula she employs repeatedly on I Blame The World where she comes up with a list of mildly controversial statements. On "Is It Just Me?" these include "I hate holding babies" and "Modern art is boring." This song also weaves in her longstanding skepticism towards religion that's always a central theme in her work. On "Hypochondriac" she also utilizes a list to name off ways she abused her body like "I used to smoke like a chimney" and "I used to drink like a sailor" until she fell in love and realized that life is worth living. These songs had their moments, but they didn't offer the same buzzy feeling as her prior music.

Unfortunately, I Blame The World is almost entirely these list songs that feel rather lazy to me. While Loser and Self Portrait painted stories adding illustrative details to make the listener see themselves in Sasha's personal stories, she's switched entirely to telling the listener laundry lists of facts about her. I find these songs, even when I relate to their sentiments, to be hard to become invested in. I find a distinct lack of craft in these songs that manage to have good lines but no narrative glue to hold them together.

This starts from the jump with the first real track on the album (aside from the confusing 45 second opening track "Intro") on "I Blame the World". While I do love the line, "I'm a glass half empty kind of girl," and would buy it on a tote bag for sure, the song gets somewhat laborious as each verse starts with a cynical "Why?" phrase ("Why paint my nails if they chip off? Why try to find myself if I know I'll end up getting lost?") before the highly repetitive chorus comes in. All of the ideas here are interesting, but they stay frustratingly confined to the surface.

Again, the next track and current single, "Adult," presents a compelling premise at face value as she sings, "No one ever told me that growing up gets kinda lonely / Being an adult is fucking hard," in the chorus. Still, even though I end every day essentially saying "being an adult is fucking hard," I struggle to connect to this song because it's another laundry list of ways that it's hard to be an adult without actually bringing me into the world of what being an adult looks like for Sasha. There's no real details. She makes big, bold statements on this record that seem revealing, but they distinctly lack a certain amount of vulnerability that her music used to ooze with.

What I struggle with most on this album is the redundancy of themes without much growth or progression from them. The album doesn't feel like it's heading anywhere, and there's nothing learned from the journey. While the themes of cynicism and frustration with life are abundantly clear throughout, there's really no payoff to relish in. I've listened to it a few times through now, and I'm just confused by what the overall point of the album is. Also, her last two albums I've struggled with how flat, over polished, and stock-feeling the production is. The ragged edges on her early records made them more compelling. Now it feels like those unique seams have been buffed out without adding anything distinctly new. I honestly don't understand what has shifted so unfortunately between the EPs and the albums as she's written primarily with King Henry for most of her career.

As for the songs I did like more on this album, "New Normal" stands out from the rest for being about coping with an incredibly fresh break-up. The song comes from a new angle of illustrating the ways she's struggling to move forward as she takes the same long afternoon drives they used to and eats at the same restaurant. Her new normal is stunningly similar to the old one, but these lines carry more images than most of the album, and it becomes easier to connect with.

"Global Warming" also offers a different take on her deep cynicism as she sings about a love that makes her forget everything that's so deeply wrong with the world. She says, "Now I know why they say ignorance is bliss," as she sinks into this new relationship. While it is technically a step forward from living entirely engulfed in existential dread, it's somewhat less satisfying in its lack of agency. She's not singing about learning to cope with it herself but through the distraction of another person.

I've spent the last few months grappling with the disconnect I've experienced when it comes to Sasha Sloan's new music. With each new single, I struggled to feel the same love for Sasha's music that I once did. Part of me wondered if I'd just overhyped her older music, but as I listened to those songs as I wrote this article, I got chills at moments. Those songs are undeniably special. I love watching artists progress and grow, even if it takes a second to get used to, but I just don't see much growth in this album. It just leaves me wishing the album could've pushed for more stories, more details, and a deeper outcome. I just wanted I Blame The World to be more.

New Music For May: Jonah Kagen, Maisie Peters, and More

Maisie Peters at the El Rey