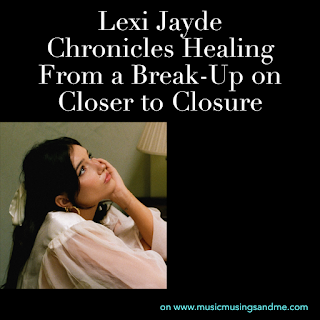 Lexi Jayde hit the ground running in January 2022 when she released "drunk text me" and rocketed to prominence for the aching ballad. She poured her anguish over a traumatic break-up into the track, and it quickly connected with her already established fanbase of over a million followers on Instagram from her acting days and debut EP, A Teenage Diary. At the time, I found the song to be 2022's "Driver's License," and in a similar fashion, the Closer to Closure EP feels very much like a version of Sour for those who wished Olivia's debut album dwelled on the ballads.

Closer to Closure zooms in on the slow and painful realities of healing from a break-up, and especially, regaining a sense of self and self esteem after being cheated on. Over 9 tracks, Lexi grapples with her ever evolving feelings both towards her ex and about herself and the situation. The opening track sets us in the story long past the initial break-up and the shock. In the first verse of the opening song, "you don't deserve these tears," she admits, "I think I should be over this / Cause it's been too fucking long." She asserts that her ex isn't worth dwelling over so much, and she kicks herself for being so stuck in what happened when her ex has moved on just fine. In this song, she's still dreaming up ways they could potentially come back together even though she's well aware that the relationship wasn't a good one.

On "homesick," she sings about feeling emotionally homesick now that she can't retreat back to the relationship she once had. She uses the visceral emotion to describe her desire to go back to a relationship that's evaporated, squeezing it into a metaphor about their relationship being a house her ex burnt down. The lyrics are a bit overwrought and not the most original, but Lexi's authentic delivery sells all of these songs. Her inflection communicates her emotions so clearly that the words are hardly necessary. This track leads into "drunk text me" which goes into similar themes and cements the fact that she's still stuck in the want to go back in time.

The following piece isn't a song. Lexi includes a voice memo in the middle of the album that likely has the same title her phone automatically assigned it, "august 5th, 2021." For 32 seconds, Lexi talks into her phone with a shaky voice blurred by tears. It's hard to make out exactly what she's saying here. Normally, I love inclusions of personal moments or intimate voice memos like on "929" by Halsey, "Cherry" by Harry Styles, or even Billie Eilish's standalone iconic intro, "!!!!!!!." Here, though, I don't exactly get the purpose. The moment is raw and nearly uncomfortable to listen to. It clearly expresses her anguish with the situation, but I don't really find it necessary because her music does an incredible job of conveying emotion on its own. The listener shouldn't be confused about how they should feel or how Lexi feels, and having this 30 seconds inserted right in the middle of the EP was a bit jarring.

The EP picks up with "cruel intentions" which features gorgeous, airy acoustic guitars and the chorus which showcases her floating, swooping vocals on the high notes. This is a triumphant point for the album. While the lyrics aren't entirely original, the sonic break from some of the heavier, darker arrangements really makes this song stick out from the bunch, and Lexi crafts an admirably made break-up track lamenting that she had nothing to do with the way things ended and that it would honestly be easier if she'd had a hand in what happened.

"hate to be you" introduces sliding electric guitars that feel like Speak Now era Taylor as Lexi talk-sings about her frustration with her ex sleeping with her best friend. She's reached the anger part of the grief cycle, and she finds a stride in singing about how she'll get to move on from this one day, but her ex will have to live with their choice forever. She gets in a few jabs like, "And it's funny that you didn't cheat / With somebody hotter than me," after revealing earlier in the song that her ex cheated with her best friend. This song also feels like it's made out to the best friend as well. Lexi gets to relish in having a clean conscious.

In the final few songs, Lexi does finally start attempting to get closer to closure as the title implies. "self sabotage" is an admittance of her own toxic behaviors that are keeping her trapped in the headspace of the relationship. "One day I'll be stronger," she reminds herself while she's stuck in the thick of things. "In this moment, it really hurts like hell," she adds later in the chorus, but she also acknowledges that one day she'll be able to grow from all the pain. There's hints of a will to move forward.

This carries into "gentle" she describes struggling even while moving on to someone new. It's a letter to her future partner who might not understand why she keeps them at an arm's length. "Could you please me gentle with me / My heart is fragile you see," she repeats in the chorus before adding she, "can't take another lesson." This song is another gem from the EP where her songwriting finally finds its foothold, and she perfectly describes how difficult it is to date someone else after going through a traumatic experience. It's hard to explain reservations around love to someone who wasn't responsible for the first heartbreak.

While the EP could've definitely closed with "gentle," "someday" is the actual closer where she reminisces on the relationship from a much more removed lens. She brings up details from the opening track and sees them in a new light. "Someday, I'll wake up and I'll laugh about the break-up," she assures herself. While she's not feeling fully whole yet, there's a calm remove. She's no longer glued to the past. She's able to be casual observer of the oddities of break-ups. It gets deeply into the contours of her pain and wraps up the EP spectacularly. It's likely not a coincidence that Finneas co-wrote on the final track and did a great deal of production for the EP.

Overall, after a few listens through, it's clear that Closer to Closure delivers exactly what was promised in an emotional yet healing rollercoaster perfectly primed to become the security blanket of those who recently suffered something similar to Lexi. Her vocal performance is captivating, even as someone normally indifferent to that aspect of music, and while her lyrics could sometimes be fortified by a few more details, she has no problems building out a complete and moving narrative arch over the entirety of the EP and in creating a diary of this impactful break-up. Everyone has already said it, but Lexi Jayde is definitely one to watch.

Ingrid Andress Drops "Seeing Someone Else"