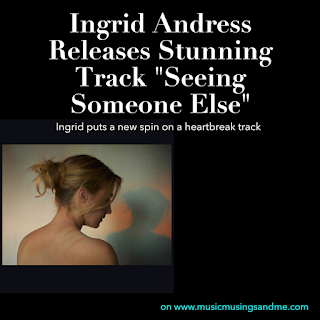 While most of the time my interest in listening to country music begins and ends with early Taylor Swift, I do love a good women in country moment, and this one was brought to me by queer pop icon, Fletcher. When Fletcher posted a clip of Ingrid's new song, "Seeing Someone Else," on her stories, I was immediately transfixed and knew I needed to hear the rest of the song. I already know this track will stick with me.

Ingrid's voice cuts clear over the palm muted strumming of an acoustic guitar behind her. As the chorus comes in, her voice soars and contorts on a melody that perfectly blends sadness and melancholy with a hint of empowerment at the realization that she's finally unspooled the situation. It's undeniably moving and gut wrenching as the big reveal is made. The verses frame out a story that feels like a classic tale of cheating. She opens by describing this person that her significant other is wrapped up in by sharing their shared past, "I think you're seeing someone else / Yeah, we're from the same hometown / Wears her hair up like mine... She waits tables off the West End / Burns her money every weekend." Ingrid concludes this girl might be more his type.

Then the chorus kicks in with a distinct rise as she plays on the double meaning of "seeing someone else". It's revealed that he isn't cheating but seeing a past version of herself instead of the person she's become. "I think you're seeing who I used to be," she laments as the chorus begins. "I bet you wish I was the girl that you met / Out at a bar, making a mess at 23," she continues, feeding off that first verse. She finishes the chorus by doubling down on the fact that they're clinging on to a person who's now long gone, unable to grow up with her.

In the subsequent verses, she goes back to the classic cheating tropes to double down that he isn't being secretive with his phone or coming home with another girl's perfume all over him. In the end, though, she questions whether it would be easier if he was cheating with someone else musing, "Maybe it'd be better, maybe it'd be worse / If I had someone to hate, blame for all the hurt," before definitively stating, "Well, this won't work when you're still him and I'm not her."

This song struck me immediately with the layered pain and unique story baked into these expertly delivered lyrics. We've heard the cheating heartbreak narrative time and time again, and Ingrid artfully twists its tropes to deliver the ultimate surprise. There's a different level of pain in realizing that you've both outgrown a relationship that otherwise feels so solid. While this can happen at any point in life, it struck me as devastating song about growing up, even beyond the romantic context it's framed in. There's always going to be people who hold on tightly to a version of you that doesn't exist anymore, that you've outgrown, and for one reason or another, they're going to try to hold onto a person that's gone.

The twist was breathtaking and the development of the story is excellent. I get chills every time the chorus wraps around, and it makes me remember why I do love country every so often. As someone who prizes the storytelling power of songs above every other possible utility, it's often country or country-rooted songs that deliver in spades. I'm so glad that Fletcher brought this track to my attention. It's a favorite on my May playlist.

New Music for May Roundup