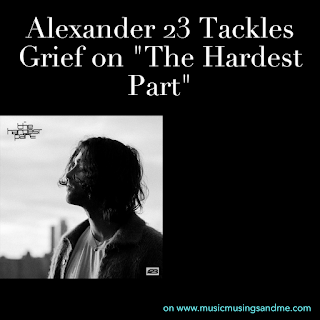 Alexander 23 has been a gifted storyteller since his first released song, "Dirty AF1s," and that's only become more apparent as time has gone on. "The Hardest Part" may be Alexander's most moving song yet as he sings about the striking loss of someone close to him. He's shared bits and pieces of this song on TikTok for months, and it's devastating every time he's pulled out his acoustic guitar to play a verse or chorus for a video. It seems "The Hardest Part" will be the last single before his debut album is finally announced.

Alexander noted around the release that he wanted "The Hardest Part" to be able to have its own moment aside from the news of the album since it is such a serious, important song. And because of that same, sensitive nature, he shared in an Instagram post on the song's release night that he's still not sure how to properly push the song into the world. In the post, he wrote, "After I wrote 'The Hardest Part' I didn't want to put it out. It felt wrong to commoditize grief, especially as so much of it wasn't even my own... I'm hopeful that we can heal and grow within the comfort of knowing that while our experiences are unique to us, our feelings aren't. I hope that you never relate to this song, but I unfortunately know that you will, and I hope it can be there for you when you do."

In a live before the song came out, Alexander mentioned that this song, along with "Track 9" and "Brainstorm," has never lost its emotional resonance regardless of how many times he's played it. Dan Nigro noted in an Instagram post that "The Hardest Part" was the song that convinced him to work on Alexander's debut project after feeling burnt out from creating Sour. The song is a collaborative effort between Alexander, Dan, and gifted, gut-wrenching songwriter Amy Allen.

The song very directly grapples with loss but from a nearly removed perspective where the loved one wasn't a parent or sibling or someone involved in his life on a daily basis. There's a jarring realization that's a reminder that everyone taken for granted now might not always be around and that part of growing up is inevitably facing loss from the most unexpected places.

The first verse is nearly agonizing from Alexander's gift with storytelling craft. He has an incredible skill sharing moments in a way where you don't simply hear about them and internalize the message but that the moment washes over you and becomes your own. "I thought that everybody gets older," he admits in the opening line, "But I guess that's not the case / Cause you said goodbye to your family last night / You were only twenty-eight." This moment symbolizes one of those most terrible losses of childhood innocence in realizing just how terribly fragile life is in ways you may never have been forced to directly consider.

The second half of the verse, though, is the most gut wrenching as Alexander realizes that the world will inevitably move on without this person in a nearly inconceivable way. "And the year is gonna get a lot colder / But you'll always be stuck in June / When the the trees turn red, will it hit me then / That I'm not gonna see you soon," he observes. "You'll always be stuck in June," has been haunting me from the first time he debuted the clip. It almost seems cruel how when one world stops the rest keep moving.

In the chorus, the finality of it all starts to sink in with the understanding that there is no endless time. "I never said goodbye / And now it's sinking in / that the last time I saw you we were kids / I guess the hardest part of getting old / Is that some people that you love don't," he sings in the chorus as he comes to terms with the shock.

The little pangs of remembrance like the trees turning red come up again at the end of the second verse where he looks back through his text messages, "Yeah,  cried when I read / The last text you sent / Cause I'll never see those three dots again." Grief is a million small needles. So often, it's hard to realize fully what you have and what you want in life until it gets taken away. "I wish I would've tried harder to stay in touch / I thought we had more time / Too busy growing up," he sings in the bridge. This part of the song, whether you've lost someone or not, is a jarring revelation. Life is so chaotic that it's hard to stay in touch with everyone who's been a part of your life at one point or another – nearly forgotten childhood friends or distant relatives. The people you talk to twice a year on each of your birthdays. Relationships that don't carry much weight until they're no longer there.

The song serves as both a solace and a hand to hold in grief but also a reminder to cherish the people in your life, especially those that exist around the periphery who you might not think of every day. Life is incredibly fragile, and that's at the heart of "The Hardest Part."