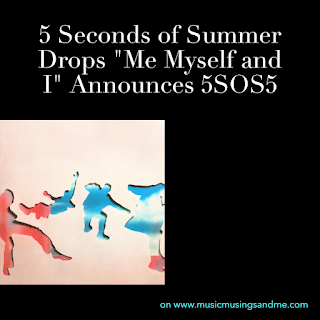 I have recently ventured down the 5SOS rabbit hole conveniently just in time for 5 Seconds of Summer to announce their brand new album 5SOS5, set to release in September of this year. I jammed out to "Amnesia" and "She Looks So Perfect" as much as anyone else who listened to the radio in 2014, and I got reintroduced to the band when I fell into my belated One Direction era since 5SOS is an inextricable part of the 1D lore because the bands toured together so often during 1Ds peak years. The story goes that Louis Tomlinson even discovered the band online and brought them to the attention of the band's management (in hind sight, for better or for worse).

I liked their last record, Calm, particularly "High" and "The Best Years" that came out with the first wave of COVID albums, and I've always found them to be an interesting band. They oscillate between being pop punk and pop rock sometimes playing with new wave sounds, and while they are far more like a Warped Tour band than like the manufactured, choreographed likes of NYSC, their rise with One Direction has left them inexplicably bound with the sheen of boybandom. Jasmine Zade recently made a very interesting video delving into the confusion around 5SOS's status as a boy band or not. For the record, though, they do get their own section in Maria Sherman's definitive boy band bible Larger Than Life. Whatever kind of band they may be, they did earn themselves a massive internet fandom and a large portion of 1D's original fandom which cements their place in pop history and their alignment with the history of boy bands in their newest iteration.

Unlike 1D, though, the 5SOS boys have prevailed over the last ten years and ridden the ups and downs of being a band in an ever evolving world. Likely, this is owing to the fact that they chose each other as friends first back when the band formed, but it's still a marvel they've made it so far. While Calm took a bit more of a mellow, spacey approach, their new record brings back more electric guitar and bit more of that pop punk sensibility we've loved them for over the years. Still, there's a more serene sense that covers these tracks.

"Me Myself and I" is my favorite new music release of May so far. It perfectly executes what it's trying to do. There's a flurry of guitars, drums, and bass perfect to chair wiggle and groove to, and the lyrics are well constructed enough to not trip me up as a devoted lyrics person. Simply from how the song is mixed, you can tell the words are less of the point, and for once in my life, I'm cool with it.

So far, for 5SOS5, despite many of the members being engaged or married now, they're painting a somewhat bleak picture of bad choices, broken relationship, and unstable footing. On their first release of this album cycle, "COMPLETE MESS," they blend light, floaty vocals with lyrics admitting to never having been a saint. While the verses realize that they feel lost and incomplete without their person by their side, the chorus laments, "You make me complete / You make me complete / You make me a complete mess." The song easily sounds like a love song, but there's something more difficult to reckon with under the surface.

On "Me Myself & I," they admit to making a series of mistakes that land them alone and feeling sorry for themselves. The song is self aware in the relationship's shortcomings and actually takes a shocking amount of responsibility. "Leave it up to me to fuck it up without a good reason / I know, I know that it was my own fault / I never picked up that phone call," they recount in the first verse. There's a reference to "me and my selfish appetite" that ends up rhyming with the title and chorus hook, "Now it's just me myself and I."

I've let the two songs on the album loop around a few times now, and they just feel good. While there's nothing truly exceptional to speak of, the songs feel good and pulse with knowledge and assurance gained from a decade of working as a band. They're evolving while holding on to their essence, and that's a hard feat to pull off. I really enjoyed their YouTube series breaking down each year as a band, going over major moments and revealing what they remember most distinctly of those times. They've ranked their own songs on Twitch streams and are clearly as wired into their fans as they ever have been. I gobbled up all of this long form content around their anniversary. I firmly believe that YouTube and long form content is so severely underutilized by artists, but it makes sense that a band like 5SOS would be on top of it.

That's clear even in them deciding to name their album 5SOS5, as they teased on The Zach Sang Show. The symmetry is satisfying, but it's also hilarious to see the fandom's pet name for an album actually get used in an official capacity. If you don't spend your life entrenched on music Twitter, when fans talk about an artist's next album that's on the way that doesn't yet have a title, they'll combine the artist's initials with whatever number release the next album will be. This shorthand can be used for months or even years, and it's often hard to remember the actual name of the project for a while after it's announced. Two recent examples would be Harry Styles's HS3 becoming Harry's House or Conan Gray's CG2 becoming Superache.

On top of the name being absolutely adorable, the album will have 19 tracks, only 2 of which are currently released, and they have some absolutely fascinating names. As someone who anticipates track lists almost as much as albums, these song titles don't disappoint in the slightest. Some of my favorites include "Easy For You To Say," "Older," "You Don't Go To Parties," "Moodswings," and "TEARS!". Also, as I write this article, it's dawning on me that I really do need to see them live this summer.

Easy For You To Say

You Don't Go To Parties

New Music For May Round Up

Maisie Peters at the El Rey