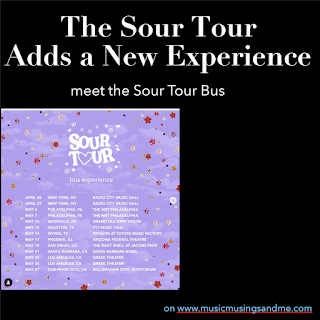 Didn't get tickets to the Olivia Rodrigo tour? Don't worry, I didn't either. Still, Olivia's team just announced a fun way to take part (even without a concert ticket) if her Sour Tour is coming somewhere near you this spring. To fit with the prom branding of the Sour era from the Sour Prom concert short film to the prom night themed goodbye to Gracie Abrams in Detroit, Olivia has created the Sour Yearbook experience to add on to this second leg of the North American tour when Holly Humberstone takes over as the opener for Radio City Music Hall.

Likely, this move has come in response to the number of fans who were devastated that they weren't able to get tickets for the tour itself. Tickets were extremely limited given the size of the venues and her popularity, and it didn't help that bots and scalpers scooped up the bulk of tickets in seconds. While I've already covered the disappointment that was the ticket sale, there is a silver lining now, if the tour hasn't stopped through your city year.

The Sour Yearbook corresponds with the Sour Tour Bus experience that's being rolled out starting in two days in New York. This experience seems fairly similar to many artists' advance merch shopping options where fans can buy shirts and totes a day or two ahead of the tour actually hitting the city (this was super popular most recently with Love on Tour, especially with fans who couldn't get tickets to the show). But, of course, Olivia has put her own spin on it to make the experience a bit more elaborate and special. While exact times haven't been made available, in partnership with Instagram, Olivia is rolling out a merch shopping experience for the day of the show.

At the Sour Tour Bus you can not only buy official merch but also embroider it, as well as claim your "official SOUR yearbook Reels". I'm not totally sure what that last part means, but the post also teases "and more" meaning that there are likely some fun surprises to come as the bus rolls into your town. Right now there's not a ton to go on for this experience, but it is officially no ticket necessary and sounds like a great way for fans to get to meet up and partake in the Sour Tour experience, even if they weren't able to grab a ticket. This might also lead some fans to trying to snag last minute resale or box office tickets if they're coming out to the venue anyway (just be careful to watch out for scams if buying your tickets online!).

With Olivia's tour already creating quite the stir with fans lining up overnight to queue, this Sour Tour Bus seems like it could potentially add to the already growing chaos, but it's also a really sweet gesture to include more fans on this small theater run. I'm intrigued by the idea of getting to embroider merch to create really fun, unique items and get to hang out and craft with other fans. Also, it seems like whatever collaboration they've made with Reels is all about capturing memories. Since a group of fans on Twitter were already joking that they were going to climb up the backside of the hill of the Greek Theater here in LA to watch the show, this Livies HQ sanctioned event will likely be extremely welcome–even if you're enjoying the show from outside the venue gates.

Also, it is important to note that the bus will not be present at all of the remaining North American dates. The bus will unfortunately not be in Toronto, Boston, Washington DC, Atlanta, Austin, and Las Vegas, likely due to routing limitations. For the stops the bus will be making it to, the Sour Yearbook experience will be available onsite at the venue on the day of your show. Make sure you follow @SourYearbook to stay up to date on new announcement, and you can also now #SOURyearbook if you want to have your experience at the bus reshared on their Instagram for an @LiviesHQ notice.

Cities with the Our Tour Bus Experience

More on Olivia Rodrigo on Music, Musings, and Me...

The Many Brands of Olivia Rodrigo: Diving into her Fashion

Driving Home 2 U: Olivia Rodrigo Remembers the Making of Sour