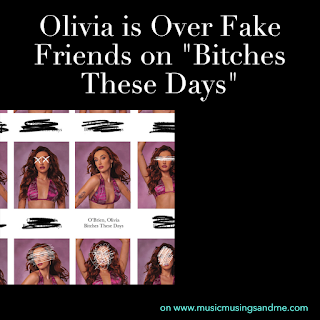 Olivia O'Brien is finally releasing music again. After dropping Episodes: Season 1 last June, she intended to release a second EP in the Episodes series to create a picture of a full album in the fall. Then her label got completely shaken up, and she hit the breaks on her releases. Over the following months, she's transparently explained to her fans that she isn't going to release music without the full support of her label–otherwise she wouldn't be signed to one. Since Island wasn't able support her at the time she launched the series, Olivia's career has sat dormant for a minute. But now she's back with a loud, poppy new track "Bitches These Days."

Having involved focus groups of fans in deciding what to cue up for her first release and in creating the cover art, Olivia is restarting her release efforts by bringing her fans every step of the way. On TikTok she turned fans loose with a couple images from a press photoshoot to retool into a cover that fit the snipet of the song she shared. Eventually, she chose a yearbook style graphic that does fit the high school-like energy of the track. With the Spotify canvas and visualizer filmed on her manager's phone, she's moved from a super high-gloss world with Episodes to a DIY feel for the next phase.

The song itself has been in the pipeline for a while, and she's discussed how she has so much more ready to go now that she's releasing again. The song is lyrically witty and jumps out at me more than anything on her prior EP, and it's making me hopeful that the second half of Episodes will be a bit sharper in the storytelling if she does choose to continue forward with her original release plan a year later.

"Bitches These Days" is a song that makes you want to jump on a bed or dance on a table. It's full of so much pent of energy just begging to be freed. Everyone's had a fake friend, and that's exactly what "Bitches These Days" is here to complain about. She starts the first verse by transporting us to a smokey, dim night club. "You tell me that you love me when you see me at a party / Then I watch you turn around and see you whisper to somebody / You look in my direction looking like you had a secret / But your friends don't really care about ya, they ain't gonna keep it," she sings in the first verse.

In the pre-chorus, she decides to eschew timelessness and poetry to get directly to her point of reality. "You comment on my photos thinking that I don't know / You're telling all your girls that I'm such a stupid hoe," she sings in an increasingly aggravated tone. Normally, I might critique a lyric like this, but it truly does capture such a raw, blunt feeling that it works.

The chorus is the cathartic break for every bullied kid and adult with two faced friends. Given Olivia's circles running with the influencers of LA, a picture of exactly what she's complaining about builds easily. "You're way too pretty to be so mean," she laments at the start of the chorus. This sent me laughing in the middle of my first lyric because it's been a thought I've had too many times since I've moved to LA. "Baby I don't care if you don't like me / Just don't be fake say it to my face / What the fuck is up with bitches these days," she finishes off the chorus. While blunt, it's more than relatable. Sometimes, even when you don't care what people are saying behind your back, it's annoying to not be able to tell where you stand with a person in your circle. As Bowling For Soup aptly said, "High school never ends."

The second verse doubles down on detailed storytelling of the song as Olivia turns the table to rant about everything she could've shared about this girl but didn't as she transports us out of the club and onto the sidewalk. "Held your hair when you were throwing up, and stayed with you outside the club / When you were doing bumps inside, you know I didn't tell no one / I didn't even care when you told me that you fucked my ex until / You went and did the same to the next and next and next," she spills on the verse. There's a spiteful edge and a sense of vindication as she finally gets to put herself on a friendship pedestal. It's a different form of release than the chorus. There's something about the inelegance of her phrasing that makes her point even starker.

She ends this vent session with a new pre chorus doubling down on everything that's happened earlier in the song. "I guess I got it all wrong, maybe I'm a dumb blonde," she quips in response, playing on the rude things that have been said behind her back. "Could've sworn you told me that you cried to all my sad songs," she sings before the song roars back into the chorus. It's extremely meta and breaking the fourth wall, but there's a pleasurable edge to that. The song is definitely honest.

This release is setting the tone for a great run of feature releases to come in the future. Hopefully Olivia is able to gain the label support that she's been looking for in the last few months and all that chaos is finally over for her. Surely there will be more to mull over very soon.

renforshort is a Chameleon on "made for you"

All The Songs You Need To Listen To In April