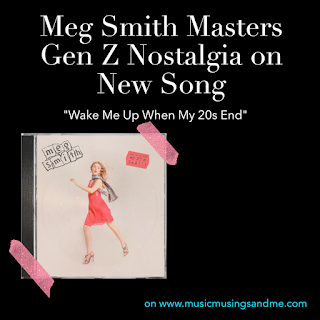 Meg Smith first came on to my radar with on TikTok. I don't remember which video exactly, but Meg's bright, almost Hilary Duff style song lamenting being in your 20s immediately caught my attention. I've seen many more of her TikToks since and started following her journey on Instagram as well. She's recently made a stop in LA to play a show at School Night (where I absolutely would've been if I was 21) with Mistine who I recently chatted with for a feature. After months in the making, Meg finally released "Wake Me Up When My 20s End" Wednesday night.

What I love about Meg is that she's fully embracing the return of Y2K and the major nostalgia points for those of us in our late teens and early twenties in her own way. She's a vocal fan of vintage Disney Channel and loyal to the great acts of our childhood–Hannah Montana and the Jonas Brothers. Her glittery pop perfectly fills that now empty lane and pretty effectively pulls on my childhood heartstrings. If you need more convincing, she once pitched herself on TikTok as making music that sounds like, "a Y2K romcom soundtrack + Hannah Montana + Fearless era Taylor," and if that's not a perfect fusion, I don't know what is.

"Wake Me Up When My 20s End" is a song about wanting to grow up, except it feels fresh and new because normally that yearning is around turning 16 and getting your license or 18 and becoming a legal adult or 21 and being allowed into bars for the first time. Meg has made it past all of those milestones and still feels no more content than she did before. Instead, she sets her sights on her 30s, the magical age when you become a "real adult." While everyone hits milestones at different times, there is a clear picture in the popular imagination that your 30s is when things get more stable. You're not constantly changing and neither are your circumstances. In the past, that time of life has received heaps of disdain and a sense of fear around becoming "boring," but it makes sense that Gen Z who's grown up being hyper aware of the topsy-turvy world is now yearning for that feeling of normalcy.

While Meg is lamenting her current time of life, her glittering, bright pop can't help but make you smile, and even though there's a laundry list of downsides to being in your 20s, the song does make room to identify the silver linings. Sometimes the chaos stereotypical of your 20s can be fun, and if nothing else, it makes for some good stories.

She starts the first verse with a story transporting to listener to Bar None on the Eastside, ready to pop the bubble of the glamours New York City night. While she's hoping that her card won't decline she realizes that even though she doesn't like her date, they'll probably end up going home together because that's the predictable pattern to follow. In the pre chorus, she gets frustrated with herself the next morning when she realizes that she's doing a bad job of escaping these cycles she resents. "Walking home with my heels in my hands / Said tonight would be different but it's how it always ends / My roommates throwing up over 10 cheap beers / Is this every night for the next 10 years?" she sings to set up the chorus.

I've heard this chorus possibly one million times on TikTok already, but I'm somehow still not sick of it (which cannot be said for a lot of songs from TikTok). There's a fun, breezy melody that creates an interesting contrast with the electric guitar and drums in the background. It gives Lizzy McGuire energy in the best way. "Wake me up when my 20s end / When I got real friends and some real money to spend / Cause when I'm 30 I won't have to pretend," she sings in the chorus. She really gets to the heart of the feeling of playacting being a grown up that permeates through your life after you move out of the house. The part about having real friends and real money universally resonates.

In the second pre-chorus, she sings about, "Smoking on the fire escape talking ten top fears," before asking, "Is this every night for the next ten years?" And while there's a desire to move past that phase, there is something cozy about having these really random, deep conversations late at night with your best friend or possibly someone you'll never talk to again in your life. It's a 20s moment that might be worth holding on to.

Meg does a remarkable job of wiping the glorified veneer off the 20s reputation while also creating a palpable sense of in the moment nostalgia where you know you'll look back on those parts of your life with affection. In the bridge, she hits on a stuck feeling that I've definitely come to known well that breeds from all the uncertainty, "I'm tired of finding myself / Can't your 20s be fore anything else? / I'm over the shitty advice / Wanna be starting the rest of life."

Meg Smith is definitely a pop star in the making to keep your eyes on. This song is the perfect addition to my playlist and strikes the right balance of sonic nostalgia and relatable new adult content. I'm very excited for what's up next.

"All 4 Nothing" by Lauv Review