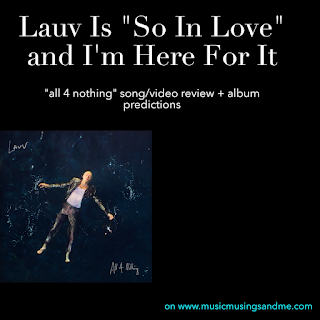 I've followed Lauv for a really long time at this point. I absolutely love his 2019 album, How I'm Feeling, and spent a lot of 2020 listening to it on loop in the background. Now, Lauv has announced his follow up album, All 4 Nothing, and released a second single by the same name. The album is coming August 5th, and he'll pack his bags for tour a few days later starting his North American run on April 11th in Minneapolis. You can go ahead and sign up for presale on his website to get your tickets Monday!

As for the song we have now, Lauv is fully embracing love in this new song and video. Co-writing and co-starring with his irl partner, Sophie Cates, adds an extra sweet layer to this track. If you're not familiar with Sophie, she makes amazing music, formerly put out under the name Silversphere, with her most popular track being "Drinking Games." My favorite thing in music is watching two songwriters fall for each other so that has left me extra in love with this track.

The song is light, free, and soaring and would be the perfect soundtrack to sticking your arm out the window of a convertible on a winding drive down the PCH. He finally feels like he's allowing himself to let in a bit of the good in life without questioning it too much. In the chorus, he triumphantly announces, "I'm so in love, I'm so in love / I don't ever want to stop this ride that we're on." I love that Lauv is getting to play with some lighter, happier themes that really suit his sound.

In the press release for the track, he mentions that the song is about, "loving someone so much at a time in your life when you're still in the process of learning how to love yourself and being scared how your own personal insecurities could ruin a love that is and could be so genuine and transformative." I really appreciate him crafting a love song that still leaves room for personal insecurities. There is such a cultural narrative that you can't receive love until you fully love yourself, and that notion can be so limiting and isolating, especially for those who struggle with mental illness. No one ever reaches perfection, so it's unfair to perpetuate the narrative that you can only be loved once you're fully there with yourself. Sometimes the two can co-exist in a really healthy way.

He closes his comments on the song by saying, "In essence, it's a song about surrounding to love and life." The upbeat sonics and the casual, joyful air created there truly captures that feeling in a magnetic way. In the first verse, he sings about not realizing how consequential the first time he met Sophie would be and acknowledging how funny it is that he couldn't see in that moment that, "Now I can't think of life without you." In the second verse, he looks back on what he's learned from prior relationships and at how much he's grown. He promises to never leave her to cry on her own in a very sweet final line of the verse.

Though the song is pure love and serotonin, I do love the little pragmatic bit at the end of each chorus where he remarks that "saying goodbye to all of these nights" would end in everything they'd been through together being "all for nothing". While in the grand scheme of living and learning from your experiences this isn't really true, it's often something I consider when it comes to relationships. I was definitely a, "Why date in high school. You'll just end up breaking up and going to different colleges. It's not the person you're going to marry so it's a waste of time," person, so that lyric spoke directly to the most blunt part of my soul.

The music video is extremely sweet as well. There are some gorgeous ocean and water-based visuals that have stolen my entire heart. It also stars Sophie as the love interest which gives the video an extra special note and personal touch. The video was shot by Hannah Lux Davis, and Lauv called the video, "an amazing, eye opening experience which has not only pushed the boundaries of how I see myself as an artist but also as a clear example of the true artist that Hannah herself is and her ability to bring those things out in the artists she works with." It is a truly beautiful video that keeps pace with the energy of the song.

As for All 4 Nothing, the full album, the press release cites themes of "nostalgia, conflict, and ultimately, self empowerment," which sounds pretty epic. Lauv is a master of telling stories in both the most spectacular and understated ways, so I can't wait to see how this full album unspools. All 13 track names have been revealed now on streaming services, and there are some highly intriguing titles sprinkled in there.

Harry Styles Spins a Theatrical Tale on "As It Was"

Renforshort is a Chameleon on "made for you"