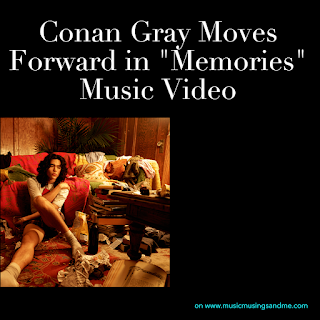 Conan Gray always brings it with his music videos. There's always a strong sense of storytelling and a narrative in the video that elevates his songs to entirely new dimensions. "Memories" is a prime example of that as the video seems to more than expand on the song but define the parameters of the Superache era. "Memories" sets a strong precedent for what's in store on the album coming June 24th.

The video, directed by Taylor Cohen, starts off with Conan lying on the floor of his fictional bedroom in an infamous sweater. In a touch of vintage nostalgia, he's talking on a corded phone while stuffing cheese puffs in his mouth. Clearly, he is not living his best life. On the phone, his friend expresses surprise that he picked up since he seemed to completely cut off contact with the world, at one point saying, "It's been six weeks. This isn't healthy." He tries to entertain the conversation until she asks if he's still "wearing the sweater" at which point he uses the chip bag technique (I would love to know if he learned it from Billy Ray Cyrus on Hannah Montana like I did) to quickly hang up on her instead of confronting the quickly mounting issue. He even struggles to get the phone to disconnect on the receiver.

When the song starts, the camera pans to Conan sprawled on a new part of his floor next to a massive pile of books surrounded by a wine bottle, soda cans, popcorn, and a lot of random junk. It is an annoyingly familiar picture of a depression spiral. As the song continues, we flash to the scenes we'll return to time and time throughout the vide–emotional eating on the floor, playing piano, and flipping through a series of Polaroids. I have to take a second and applaud whoever did the set design for this video because it is an absolutely impeccable recreation of the parts of Conan's house he's shared online where everything is just slightly shifted into this parallel universe. All the foundational elements are present–the piano, the four poster bed, candles, stacks of books, the famous arm chair. It feels authentic.

To coincide with the lyric, "It's late I hear the door," he gets up to answer the front door, and instead of a love interest there to grovel, a dog trots inside which confuses Conan and the viewer in equal measure. Once the peak of the chorus kicks in, the attitude of the video shift as Conan pulls out a lighter to take to one of the torturous Polaroids. The flash of the photo cuts to Conan kissing someone's head as they pose for a photo, but the person's face has already been melted off.

In between the agony of going through memory box of photos, rings, and trinkets that are reminders, Conan is also left to deal with the dog that has invaded his home. At first, he reacts as anyone who had a random dog show up at their house would. He tries to push it off his bed without much success which leads to another generous helping of wine and a massive handful of popcorn to decompress. This video has a high degree of production value, but this is also the most seen I've ever felt watching a Conan Gray music video.

There is one metaphorically significant moment in the video where the dog gets ahold of the beloved sweater and starts chewing it up which launches Conan to open the memory box yet again and dig through it while sitting in his closet. There's a locket. There's also a miniature postal service van that for some reason screams Texas and reminds me of my childhood to me even though I know those exist all over the country. In this section of the video, the coping stage starts to unfold. He hauls the dog to the bathroom to give it a good, soapy bath as they start to bond. And back in the living room, he hops on the strangest, vintage stationary bike. I'm not quite sure what purpose this bike serves other than creation major flashbacks to the "Generation Why" music video (an Easter Egg perhaps?).

In the ultimate notion to finally stepping back into life, Conan dresses up in his favorite (and possibly only) suit and embellishes it with a glittery, gold cowboy hat as a sign of pulling himself up again. The dog, in a show of friendship, gets a matching, mini hat. While he doesn't quite get to the putting on the pants and leaving part of the suit declaration, it does bring in the biggest wash of joy in the video. There's a very endearing montage of Conan and the dog falling in love and watching movies and hanging out together, which seems to signal the evolution of sitting with the discomfort of finally moving forward. He's making peace before the angst kicks back in.

Still, from this point on, there are solid attempts to reboot. He dances with the vacuum cleaner and walks around with a wastebasket, bringing an end to living in filth. There is a new sense of calm that bleed through the final shots until the doorbell summons him once again, this time to find a sense of forced closure. There's a box that's labeled "YOURS" waiting for him at the door, and as he goes to pick it up, the dog runs through the door and out into the night. The healing is complete, the dog has shepherded him through the worst of the grief, and now he's able to let go.

Also, it's worth noting, as @conanupdating pointed out on Twitter that in the video interlude Conan has been playing on tour that he says, "That's yours. That's definitely yours." And the box is very prominently labeled "yours" not "Conan's" like it could've been, so that seems to be a potential Easter egg for future songs or building out the track list. On a similar note, the memory box that he pulls out pearls, a locket, and other trinkets from has engraved planets on it (a possible call back to "Astronomy") and is engraved, "story in my memories SP +AC" which doesn't make a ton of sense to me, but it's shown so prominently there's no way it's not a clue.

Conan has gotten very into the Easter egg thing with this album cycle (sometimes making them way too hard for fans to really crack), so it's worth combing through this video with a fine tooth comb as you would with Taylor. Who knows what you'll find.