Sasha Sloan Begins a New Chapter with "WTF": Questioning the Meaning of Life 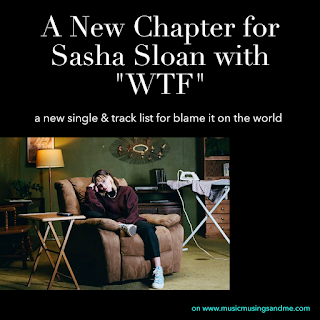 After splashing onto the scene with her 2018 EP Loser and its breakout single "Older," Sasha Alex Sloan has slowly built on that success putting out a debut album in 2020 and announcing a sophomore album last night set for 2022. While her 2020 album, Only Child, lacked a bit of the rough-edged intimacy in the sound that I'd come to love in her prior EPs, it did offer more of her signature, loopy rumination on life that keeps fans returning to her music. She veered towards a poppier coating on that project that has continued into this sophomore effort with a twist.

Sasha introduces us to her new project Blame It On The World with "WTF" as the first track. Wading through her own past scars, feelings, and emotions in light of a pandemic redefining the scope of all of our worlds has created the basis for this new project. She hasn't given much insight beyond that into what the project will be aside from the 11 track list of songs that released with the single.

"WTF" opens with Sasha's usual skepticism, proving her questions from the last album still haven't found answers. They're the kind of questions that likely never will. "Sometimes I got a hard time seen' a point in existin' / Am I here for a reason or 'cause my parents were drinkin'? / Sometimes I got a hard time, hard time believing in Jesus / If there's a heaven above us, why can nobody see it?" she sings in the first verse.

In the chorus, the music swells up as her voice lilts through, "Same shit, different year / 'Til I disappear / What the fuck am I doing here?" She repeats the final sentiment twice as that becomes the constant refrain of the song that does sometimes get tiring by the end. Her existentialism takes on a casual, blasé twist here as the apathy sinks in. After the last two years, everyone is familiar with this well worn feeling. What is the point really?

In the second verse, Sasha delves further into the doubts and bad scripts in her head that are holding her back. These negative spirals are ones we all go down, and they're difficult not to get stuck in. "Sometimes I got a hard time seeing the good in the chaos," she starts, which seems to directly reference the upheaval to all of our plans that COVID caused. "If there's a meaning to life the why the hell am I so lost? / Sometimes I got a hard time believing dreams are worth chasin' / When there's a ninety-nine percent chance that I probably won't make it," she concludes.

That final bit of insight is fascinating coming from Sasha, a fairly well-known artist and songwriter who has a major label deal. I think many fans, and many aspiring musicians, think that passing milestones like being able to support yourself with music, over 350,000 followers, or a record deal with a major label might finally quell those fears of "not making it," but Sasha makes the point that with every bar you clear, the only ones you see are the ones above you. Also, the line speaks to not only doubts that naturally bubble within us but ones that are repeated to us so many times throughout our childhoods and our lives that we can't see our dreams without them. Sasha probably didn't come up with that one-in-a-million stat on her own, but it's clearly clung to her.

This time, she adds to the chorus. After a repetition of "What the fuck am I doing here?" she elaborates on her confusion singing, "Stuck in a one-man circus / Trying to find some purpose / But it's unclear / What the fuck am I doing here?" It's that lack of clarity that often sends people into the complete lack of spiral, but it's an eternally hard question to answer and one that is also quite fluid. Catching and losing purpose can feel like chasing a butterfly.

In the bridge, she extends her own confusion towards the audience, asking if she's alone. "Sometimes I got a hard time / Am I the only one losing my mind?" The answer is a resounding no, obvious from the nearly 10 million people who listen to Sasha on Spotify each month, but sometimes it's good to check in and remember that we're all just confused blobs of consciousness trying to figure it out. Those existential themes likely will continue throughout the rest of I Blame The World.

Getting into the new album, there are tons of interesting titles that hint at possible themes like "Adult," "Global Warming," "One Trick Phony," "New Normal," and "Live Laugh Love." It seems that Sasha is pulling inspiration right off the internet for this outing, which makes sense for an album built in the midst of lockdown and the uncertain reopening that we've all been forced through. For the rest of the 11 tracks, there's:

2. I Blame The World

Sasha Sloan Returns with Sam Hunt: "When Was It Over"

"Stuck on Us" Claire Rosinkranz Review

Artists of the week Singles Song Reviews What's In my Earbuds