Driving Home 2 U: Olivia Rodrigo Remembers the Making of Sour 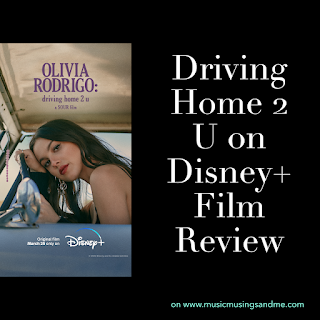 Olivia Rodrigo has been famous for most of her childhood, but in a Disney Channel kind of way. She played an American Girl Doll and then a comedy video blogger and then the Gabriella style star of the series reboot of the beloved classic movie, High School Musical. It was that show, High School Musical The Musical The Series, that proved to be the catalyst for building her massive career. From fostering the relationship she sings about on Sour to being the platform that lead her to getting a record deal, that show paved the way for so much. While "Drivers License" is often marked as the major turning point for her career, really, it all started with a track called "All I Want" that Olivia wrote from her character Nini's perspective.

It's fitting that Disney+ ended up being the home for the film reflecting on her meteoric rise from Disney child star to super star. There's so much about Olivia's last two years that are fascinating, and her life has changed unfathomable amounts both personally and professionally. As she became a Grammy nominated artist playing SNL, she also graduated high school, moved out of her parents' house, and took her first steps into adulthood. As someone who recently moved states to go to college and has been learning adulthood as well, I know that whole evolution is quite intense without a demanding career and all the eyeballs in the world staring in.

The issue is that Driving Home 2 U fails to tap into that. It feels confused in its goals and its identity as a concert film, an album promotional device, or a documentary. It becomes hard for it to succeed in any direction. If you're hoping for something like Billie Eilish's The World's A Little Blurry or Miss Americana from Taylor Swift, you will be sorely disappointed. Disney has yet to really put out a full scale pop documentary, and they instead favor a quasi-concert film style approach which wasn't made explicitly clear from the outset. Taylor Swift's Long Pond sessions for her album Folklore is probably most similar to Driving Home 2 U, but the main difference is that Long Pond sold itself as a series of acoustic performances sandwiched with collaborators meeting and reminiscing for the first time.

Driving Home 2 U wants to be both a series of performances and a documentary at once, leading it to stumble at both. I found it hilarious that the series opens with Jon Caramanica's voice from an episode of the NYT's Popcast on Olivia. I had just paused their latest episode when I turned on the film, so it was a shockingly familiar touchpoint. The film premises itself around nearly being a goodbye to the Sour era right before the tour starts. Olivia sets out to do the roadtrip from Salt Lake City to Los Angeles one more time because while discussing the making of Sour and performing the songs because those two cities and the drive were instrumental to the album's creation. The album was created during the filming of HSMTMTS, and that back and forth reality shaped these stories.

The first song covered is "Happier". She talks about originally feeling embarrassed about the song and it not getting many likes when she posted it on Instagram before she could even imagine making an album. Though her abbreviated story of meeting her collaborator and producer Dan Nigro differs from the one that he's told of their meeting, she does cite the song as the one that made him interested in working with her. In this section, there's a snippet of footage of Dan playing her the first song they wrote each other, which was definitely rough around the edges, after they'd finished most of the album. The best part of the film is definitely the small amount of behind the scenes footage that showed the collaborative efforts between Dan and Olivia to craft the album.

For each song, the film followed the same pattern of an introduction of Olivia discussing the creation of the song, how she was feeling when she wrote it, and some reflections on it having been released. Sometimes that's accompanied by a snatch of Go-Pro footage of Olivia and Dan in the studio, but these are usually pretty short. There are more making-of clips as the film progresses likely because they had more awareness of how much of a cultural impact Sour would have. Olivia's career blew up so quickly, there was likely little time to really think about possibly documenting it in the moment.

I wish there was more of that documentary style footage. More vulnerability that wasn't scripted and read in a voice-over. I'm left wanting the rawness and reality that documentaries afford. The chance to really see an artist in more lights than social media can afford. What bothered me about the film was that it felt like they wanted you to think that it was a level of vulnerable that was never truly tapped into. What made the Billie Eilish documentary so interesting was that it gave you the chance to see the good and the bad. There was a definite filter, but there was something more inside. Driving Home 2 U has an amount of polish that's hard to cut through.

The performances and reimagining of the songs are the strongest part of the film, and likely if Sour Prom hadn't already been a thing, they would've been the most central part of the film Olivia had spoken about wanting to create something with these performances for fans who weren't able to get tickets to her summer tour. "Jealousy, Jealousy," played under an underpass, got a rock-style reimagining that made it shine more. "Brutal" got a massive girl band and shown bright. And "Traitor," played at a gas station, got the Ed Sheeran treatment as Olivia layered her voice, piano, and guitar together to create her own track to sing over with a loop pedal system.

Overall, Driving Home 2 U left me wanting more, but for Livies, these performances will be a great treat, and there are moments of interesting insight shared in this hour-long journey even though I do wish there were more new revelations.

More from Muisc, Musings, and Me...