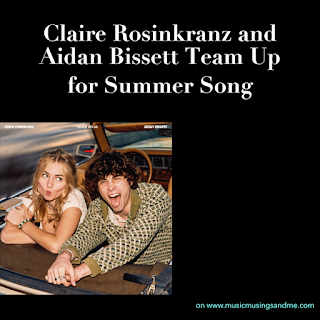 Claire Rosinkranz broke through last year with her major TikTok hit, "Backyard Boy," that offers a sweet, shimmery, infectious melody that made the perfect backdrop for a whole host of videos. Now, Claire is working on building that success with a spring tour playing two nights at the Roxy in LA. She's also released a brand new track with Aidan Bissett, "stuck on us," that's perfect for summer. Aidan also rose to prominence during lockdown, eventually securing a deal with Capitol.

On this duet, Claire and Aidan put their spin on the typical first love story of realizing that there's something real blooming from quiet late night drives. While the story has been told a million times, Claire and Aidan bring a fresh breath of life to it and reaffirm the fact that the bubbly feelings never really get old.

Claire sings about taking the long way home, holding hands in the car because they're so sure they won't get bored of each other. Aidan gets the standout line of this song in his verse, "In the middle of the night 'bout 3:02 / Catch your eyes in the corner of my rearview." This story hinges on the occasional insertion of these small, specific details and the pulsing sense of narrative that puts in the reader on this midnight drive instead of witnessing it from the outside. The chorus laments being "stuck on us" and how everyone knows just how much they've fallen for each other. There's a marked frustration in having fallen so hard, but it seems from the verses that this is more feigned than anything.

What stands out about this song, though, is the production–which if you read my blog often, you know is something I almost never say. This song is the epitome of nostalgia for Disney Channel kids and immediately sent my mind running with comparisons to the 2000s pop punk of Avril Lavigne and young Miley Cyrus on her first album Breakout. It perfectly blends the harder guitars and drums with a level of teen-pop bubblegum in the shouty echoes and harmonies that set it over the edge. Pop punk has seen a huge revival in the last year, but nothing from the Travis Barker camp has scratched this particular itch. I think a significant amount of that has to do with the chorus's rising "Everybody knows / Everybody knows / Everybody knooooows" that is extremely reminiscent to Hannah Montana's "We Got The Party."

It's a surprising sounds from Claire and Aidan. Aidan tends to favor a softer, vintage feel in his music while Claire often leans towards extremely polished, sugary sounds with a DIY feel. This loud, edgier production is a really fun twist for them, and likely, creating a collaboration allowed them both to deviate more from their signatures. This is a song that could be in contention for the indie pop song of the summer.