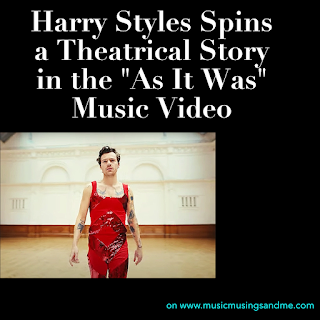 Harry Styles always adds interesting layers to his music through his videos. Each is unique and builds on a facet of the song, often in an artistic, larger than life way. Sometimes they redefine or create new narratives for the song. That's what happened watching the "As It Was" video this afternoon. I saved it till after I'd finished listening to the song and editing the reaction video that went with it. While I waited for it to upload, I finally got to watch the video.

The lyrics jumped out to me on the first listen as a song about quarantine and isolation before coming into a found family and rejoicing in living in the safety of this new, quiet bubble. The song felt like a redefinition of life and an acceptance of nothing being the same. While I stand by that interpretation, the video presents a layer of doubt that the relationship in the song is a happy one instead of one over extended and strained. A relationship misshapen so it will never be "as it was."

The start of the video plays on the costuming trope of having the main character stand out in a bright pop of orange surrounded by a drab sea of grays and browns. He appears momentarily stuck behind the frosted glass door before joining the ranks of business people rushing through a crowded outdoor passageway. Then, as he sings, "Gravity's holding me back," he begins to slide backwards against the current before he's sucked into a gymnasium.

Outfitted in a sequin unitard having shed his outer coat and boa, he climbs onto the massive spinning plate in the middle of the floor. A girl in a blue unitard appears almost as a foil to Harry. They walk past each other, their hands briefly brushing. He puts his arm around her again before the spinning plate pulls him away again. Through an intricate choreography of embraces, runs, steps, lifts, and poses, Harry and the woman in blue tell a story of a relationship made in stolen moments but never able to be solidified. Eventually, the woman tumbles off the cone shaped plate leaving Harry alone once again.

As his hand extends towards the sky, a transition is ushered in where we find Harry back in his coat and boa standing over an oval shaped pool on a wild, white, looping bridge. The worlds meld as the lady in blue returns along with the people in suits as they all begin to strip. Jackets drop and one man pulls off his shoe while Harry dramatically peels off his top. With nothing left but his red boxers, Harry reunites with the woman and spins her around in another transition of a busy, flower and mushroom print room, reminiscent of Pleasing's recent Shroom Bloom collection.

An arial shot shows the woman, still in her blue jumpsuit, lying in a star position with her hand locked with Harry's. The dancers in suits now reappear in their underwear like Harry and place bent metal sculptures (or possibly chairs?) around the couple. It becomes more chaotic, and it's interesting to note the contrast that Harry has gone from the one sticking out through his wardrobe to the woman being the most significantly different by staying in her jumpsuit. While Harry is still in color, he's conforming slightly. One of the dancers from the background comes forward to briefly lean over his face from above, almost insinuating some kind of infidelity in this fraying union.

Then the floor they're lying on breaks in two, pulling them in opposite directions once again. While Harry has a brief look of shock or panicked, her face seems relatively placid. Everything moves in reverse as we bounce back to the spinning plate, the missed moments, running in different directions. He's left to spin alone before the tone changes from being so somber. Being alone seems to create a new dawn.

He dances around on the spinning plate and dashes through the same hall he robotically walked through at the beginning of the video. He energetically breaks into exaggerated arm throws and animated contemporary dance. Between leaps and more spins, he plays air drums in one of the few elated, unscripted moments of the video where Harry truly shines through beyond the character he's playing.

There's no containing his palpable joy as he leans back against a piece of fencing only to have it open and free him from the rooms he bounced between. He throws a hitch kick on his way out before escaping into the rest of the complex.

This video is a burst of joy that is both visually interesting and full of metaphor to parse that keeps you watching over and over to unearth new clues and nods. The style and tone ring very different than his prior album eras, but as always, the feel stays very quintessentially Harry.

Reacting to "As It Was"

Harry's House You Are Home Mystery

Ranking Every One Direction Music Video

made for you renforshort review

All The Songs You Need to Hear in April