All The Songs (and Albums) You Need to Listen to in April (so far...) 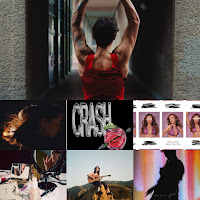 The beginning of April has opened the floodgates on new music again. The start of March was also busy with new releases, but it has since grown quiet, so I'm super excited to have so much to anticipate. Right now, we don't have a super long-range view of April releases yet, but there were already so many on my radar, I wanted to share a list of what I'm anticipating most pulled directly out of my calendar. At this point, I have so many Thursday night releases in my planner, I don't have room for my actual classes. Priorities, right?

Which track are you most excited for? Let me know in the comments or tweet me!

"When You're Gone" by Shawn Mendes

Either extremely luckily or through some quality planning, Shawn Mendes has escaped sharing a release date with Harry Styles for his second break-up track possibly leading up to a new album. He first debuted this track at his SXSW set, but the official studio version is coming out Wednesday night at 9pm PST/12am EST. I really liked his first post-Camila track "It'll Be Okay" and have listened (and cried) to it quite a bit, so I'm excited to see what he has planned next.
Also, as a side note, Shawn revealed today that he's using a fan's art that he saw on Instagram as the official cover because he loved it so much. I always appreciate when artists use their platforms to help elevate fans and their talents.
It'll Be Okay Reaction

"made for you" by renforshort

I've become such a fan of renforshort over the last couple months. While I've liked her music for a while, "moshpit" was on a totally different level for me. It's made me very, very excited for this release and what further music she has up her sleeve. In the original post announcing the song she asked fans, "tell me the most ridiculous thing you've done for a partner," so it seems this song will have quite the interesting plot.
moshpit review

"As It Was" by Harry Styles

Mr. Styles has finally announced when we'll get our first taste of Harry's House. At the end of the week, we'll all have a better idea of the album that's coming at the end of May. If you haven't been following it, these announcements started with a series of mysterious tweets and Instagram posts from the now verified You Are Home accounts. If you did miss that, make sure you check out my post chronicling each step in the Harry's Home journey.

A big note for this track is that it's coming out April 1st 12am UK time, which means that the song will drop at 4pm in LA and 7pm in NYC, so it won't be the standard midnight release for those of us in the States, and the song will drop at the same time for everyone so there shouldn't be any leaks.

"Crash" Alexander 23
Alexander 23 has been teasing his latest release on TikTok and Instagram for what feels like months. Everyone has been begging to get a release date, and to get one set for April Fools after waiting so long has fans on edge. This chorus is already addictive, and I have heard Alexander play the full song on his most recent Instagram live, so I know that this will be a great one. Alexander is such an amazing talent in music all around, and I'm hoping he will continue to gain recognition as he roles out his debut album this year.
hate me if it helps reaction

"Bitches These Days" Olivia O'Brien
Olivia O'Brien is another artists who has been on a lengthy journey to releasing new music. After some upheaval at her label put the breaks on her planned double album rollout last year. Now she finally is getting back to rolling out the music that has been finished for a while. She's been hyping up the song for a while including using the sound to run a TikTok contest for fans to create the cover art. I'm not sure what to expect from this new track since I had mixed feelings about the first installment of her album last summer, but I will definitely be giving it a listen.
Episodes Season 1 Olivia O'Brien Review

Laura Elliot is a rising artist from the east coast, and she's releasing an album of her own next week. I got to know her music because she opened for Ella Jane at the show I covered for Luna Collective at the Echo here in LA. I really loved her indie pop set, which would appeal to fans like Lizzy McAlpine, and I'm curious to see what her album has in store.
ella jane/laura elliot show review

Speaking of Lizzy McAlpine, Lizzy herself has wrapped up her opening run with Dodie just in time to release her newest album, Five Seconds Flat. She's already released quite a few singles and accompanying music videos which have all been incredibly excellent. She's also creating a short film for the movie which is super exciting, and she's currently selling tickets to a couple showings and virtual Q&As through Moment House for fans to view it all together. I'm actually loving the trend of these music based short film like Halsey did for her If I Can't Have Love, I Want Power album. Lizzy makes top-tier videos, so I know it will be amazing.
reckless driving reaction

Everything to Know About Harry's House