Olivia Rodrigo Is Definitely Up to Something: A Polaroid Puzzle 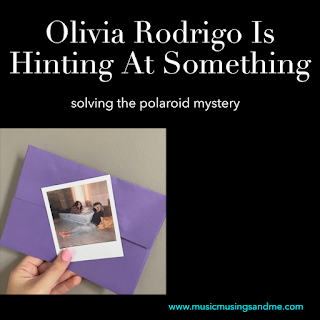 Olivia Rodrigo has her fandom pulling out the magnifying glasses and scouring the online and offline world for clues as to what could be coming. While the details are all still fuzzy, there is definitely proof that is stacking up a big announcement. About a week ago, I saw a few friends popping up on my timeline asking if others got a DM from Livie's HQ. These fans were ominously asked for a mailing address with no hint as to what could be coming. This is a relatively common practice in music nowadays with Taylor Nation doing similar things for years with her headquarters account finding super fans to involve in certain events, projects, or experiences. Halsey has harnessed her mailing list data to send clues to fans, and Bleachers has as well.

While fans thought it could be something like a signed vinyl or another specialty piece of merch like Olivia has sent in the past, instead, they received something that seemed much more like a clue. Yesterday, pictures started popping up online of purple envelopes from Olivia's team with a single Polaroid photo inside. This has launched a flurry of different theories about what these cute, yet puzzling, photos could mean.

Fans noticed a couple things off the bat about the mail their friends received. For one, it came through the Disney company address, a potential home for a documentary. There has been swirling speculation already that Olivia is working on a documentary, and one of the women seen in the photos was identified as a director who could be working on the film. In that case, the Polaroids are probably teasing behind the scenes moments coming from the doc, as all of the photos were previously unseen.

Some of the scenes from the Polaroids include a mic'd piano, Olivia and a blonde woman sitting at the edge of a pool and inside on a naked mattress, a group running into the ocean at sunset, Olivia and a friend boarding a jet, Olivia standing in the open door of a Jeep in the desert, and a couple of Olivia in various outfits and poses for the camera. These posed ones seem to be outliers as most that have been shared online are candids.

Other possible ideas include this being promotion for a second album era, or, more likely, promotion for the deluxe version of Sour. There have been various rumors that Olivia will be releasing a few extra tracks before tour. And, according to the Internet's favorite gossip account, Deuxmoi, one of these tracks will have a big name collaborator. This piece of alleged info paired with Olivia's use of Polaroids have called some fan's minds to Taylor Swift. Taylor's 1989 era incorporated the Polaroid picture as a huge emblem of the era, and I still have a few of the prints from her deluxe CD taped to my fridge. While this isn't likely, it is an idea that many fans have latched on to, even speculating that this could even be a hint that 1989 TV is coming and Olivia will be a special guest. Though it likely has nothing do to with Taylor, or honestly an entirely new era, this would be perfect for creating hype for a deluxe release right before tour.

Regardless of the meaning, Olivia's team seems to be ramping up for a new flurry of activity before tour kicks off April 5th in Portland, Oregon. She's been more active on social media again, adding a few more relaxed, personal stories to her feed recently after zeroing out her following list on all of her accounts a few months ago. Olivia also recently appeared at the Brits to receive an award with her co-writer, Dan Nigro, best friend, Iris Apatow, and her surrounding team members. She's been attending more public events like an Interscope party also attended by Billie Eilish and an event for Spotify with Conan Gray. And as for her team, Olivia recently made a huge shift, parting ways with her first manager. She has yet to announce who will be filling that extremely important role in the next phase of her career.

While my favorite theory, and the one that seems most likely, is the documentary, it seems a bit early in her career for one. Though it would be interesting to reflect on what Olivia's meteoric rise to fame was like from the inside. Billie Eilish recently had a fantastic documentary around her first album, so I'd be curious to see what Olivia's story would look like filtered through a director in the eye of the hurricane.

What do you think is coming? Are you still holding on to the Sweet companion album theory?

Update: Luckily, my favorite theory came to fruition very soon after! Driving Home 2 U, her documentary about the making of Sour, is hitting Disney+ on March 25th.