renforshort wants out of the chaos on her new song "moshpit" 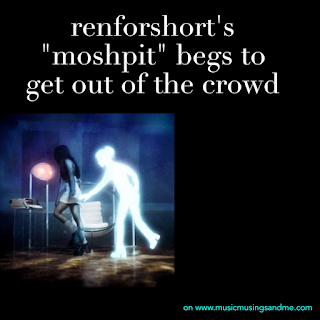 renforshort first came across my radar with a song Spotify decided to randomly hand me through the algorithm a couple months ago. I was captivated by her lyrical detail and command on story in that first track along with her smokey, darker vocal tone. The song felt easy and yet so complex at the same time. I immediately wanted to hear more.

After a few months, I was reminded of her again when Alexander 23 posted about her new track "moshpit" which he co-wrote and produced. Alexander is one of my favorite writers in pop right now, and I could only imagine how lyrically incredible the collaboration would be. Unsurprisingly, "moshpit" is a song that I already know is landing on my 2022 favorites list.

With a perfectly fused indie pop and rock inspired backing, renforshort sings about a relationship through drowning in a metaphorical moshpit. She starts the first verse by outlining the bounds of this shaky relationship. "You said you'd spend two weeks at my place / And it turned into a month / It's kinda weird / You're still here," she says. The relatively simple word choice proves fascinating in the casual shrug of it all. It's a relationship that has lapsed into apathy from the outset. She ends the verse singings, "Running out of ways to tell you / I'm not who I was when you first met / Two years ago." It's a relationship that's grown apart, and she's tired of pretending that everything is the same as it's always been. She's ready to have room to grow, but she doesn't know how to definitively end it.

In the pre-chorus, she starts a series of interesting metaphors before leading to the ultimate premise of the song, "Baby, we're a moshpit," which gets expanded upon in the chorus. The first line is my favorite of this section as she sings, "I'm exhausted running on exhaust."

The chorus sinks deep into the metaphor to show the conflict come to life through the fine line of a moshpit. "If I take an elbow to the face one more time, I think I'll break / I'm not saying I'm a saint but you're hell / If I take a kick right to the chest / One more time then you'll be dead to me / I can't be your life anymore," she sings. As someone who recently and very much accidentally found herself in the middle of a moshpit, these lyrics hit vividly, and the understanding of rising panic is clear. For a second, you think you can roll with the crowd, but missing the wavelength brings everything down.

In the second verse, she adds to the mounting annoyances that are leading to her running out of rope with the situation. "I don't know how many more times / I can come home to your mess / And not not freak out," she adds as the whole verse. The verses build on each other to show that the love interest further encroaching on her space is building to the added panic. She has nowhere to escape to be alone.

In the final choruses, she tries to call off the metaphorical gig. "Stop this mosh pit / I wanna get out / Cause if I'm honest, I'm just sick of  falling down / So won't you stop this mosh pit / I'm not having fun anymore," she pleads . It's such an apt metaphor for a soured relationship because of how split second it can go from euphoric chaos to truly awful. Falling down works so well here because it is one more thing that frequently happens in mosh pits and it can be hard to find your footing to get back up, but also falling down is a framework we often use to talk about relationships. It's terrifying when you realize that you're at the mercy of the crowd around you.

The vivid metaphor makes for a perfect frame for the song, and it proves totally gut wrenching, even as the music doesn't dwell on the nightmare she's facing. renforshort is definitely one to watch if you look for stories in all your favorite songs.

"Another Day In Paradise" Song Review

Conan Gray Is Back with "Jigsaw"

Meet Emei: And Interview with the Late to the Party