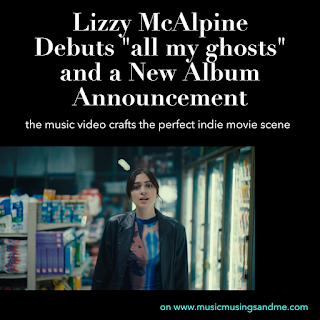 Lizzy McAlpine has been slowly releasing music over the last few months with songs like "Doomsday" and "erase me" with Jacob Collier on the heels of her 2020 breakthrough album, Give Me a Minute. Having enjoyed playlisting recognition with songs like "Pancakes For Dinner" and gathered a group of famous friends in the indie pop space like Finneas, Dodie, and Ella Jane, Lizzy has been cementing herself in the genre ahead of this latest run of releases. Today, she shared the song and video premier for "all my ghosts" as well as dropping a full 14 song track list and album name for her project out April 8th.

"All My Ghosts" carries that delicious indie movie soundtrack feeling that Del Water Gap always perfectly captures. Starting with a quiet accompaniment and her voice, the song eventually blooms into a full arrangement that has a hazy, vintage quality to it, like the sonic equivalent of paging through film photos. Lyrically, Lizzy spins a story full of tiny, nuanced details—the cornerstone of her musical brand.

One consistent characteristic in all of Lizzy's songs is a prioritization of specificity and story over usual songwriting conventions in rhyming but also melody and flow. This song is full of unconventional words that are made to work like "slurpee" and "mac and cheese." I appreciate the dedication to being uncompromisingly specific in the language because, so often, the opposite choice is made, and it adds to the unique quality of Lizzy's folky singer-songwriter tracks.

She takes the listener on a circular story of simultaneously falling head over heels in the most free and real kind of love while being followed around by bad thoughts and habits learned in old relationships. The song's subject matter echos that of the Gracie Abrams & Benny Blanco collaboration on "Unlearn."

The story starts at the very first meeting where she sings, "You got a Slurpee for free / I caught you looking at me / In the 7-Eleven, under florescent lights." Even from those few lines, the details jump out to usher in a movie in your head. She describes the moments of happiness and security in the relationship through small details like walking in "comfy silence" and an anecdote about a date night that didn't quite go to plan, "We made sangria and failed / I spilled mac and cheese on my pants / And thought about kissing you underneath kitchen lights." But even in these perfectly sweet moments, she references the ghosts of old habits that still follow wherever she goes. "They know all of my habits," she says of ghosts, "but they don't know about you / I hope that's true."

In the bridge, she imagines a wedding a few years down the line. It's the perfect romantic moment, and she sees it as a final exorcism of sorts for the ghosts that still weigh her down when she's with him. "I see it crystal clear," she proclaims as the music swells and the hope for a freedom from the past rushes in.

Towards the end of the song, she circles back around to that moment where they first met and is able to live with her ghosts in this relationship more assuredly, finishing with, "Cause I hate all of my habits but I happen to love you / I hope that's true." Such an introspective writer is probably never ending a song with completely blissful assurance, but like a true narrative, the ending of the song offers a sense of growth.

Longtime fans of Lizzy McAlpine will already know this song by heart as a demo version has been posted on her SoundCloud since July of 2020 and has already garnered nearly 100,000 plays prerelease.

The music video perfectly accents the song, bringing to life the precisely vivid details from the lyrics and offering something new for the fans who already knew the song before today's release. Gus Black directed this video which has an appropriately movie-like feeling to match the quality of the song. Between cuts of singing in the convenience store, there are flashes of the growing relationship as Lizzy shares a beer with the video's love interest and wipes food off his elbow in a diner. Speckled throughout, though, are a few moments where she spends a second too long analyzing herself in the mirror or becomes momentarily withdrawn, illustrating those intrusions from the ghosts of her past. During the bridge, we get to watch the wedding scene play out in quick flashes of glory that move with the rising tempo of the song.

Then, just as the song lyrically loops, the visuals do too as she walks back into the 7-Eleven with her love interest once more. As she wanders through an aisle by the window, a hazy figure materializes outside, and the ghost momentarily gets to take a physical form. The boy from the relationship three years prior, as hinted at in the opening title card that reads "three years later...," momentarily feels real again. She rushes out of the store to meet him but is disoriented when she finds that no one's there. It closes with the love interest coming out of the store with two drinks in hand before they walk away arm in arm, content.

This is a wonderful video that truly does justice to the lyricism of the song. It hits the perfect notes in all the small details from the color grading of each shot to the wardrobe choices that hint at the personalities of the different characters. It makes me excited to see how Lizzy will continue to expand her cinematic universe.

As for the upcoming album, there are quite a few exciting features with Finneas, Laura Elliot, and Ben Kessler. Finneas and Lizzy have previously performed together at his New York show on the Optimist Tour, and Laura Elliot is an amazing rising artist who I had the pleasure of seeing open for Ella Jane at the Echo in December. Along with these amazing features, there are 11 yet to be released tracks with intriguing titles like "reckless driving," "An Ego Thing," and "What a Shame." Hopefully between now and April 8th we'll get even more clues into how this album will unfold. I'm definitely all ears.

12. Nobody Likes a Secret

Finneas "The Kids Are All Dying" Music Video Review

A Farewell to The Zach Sang Show