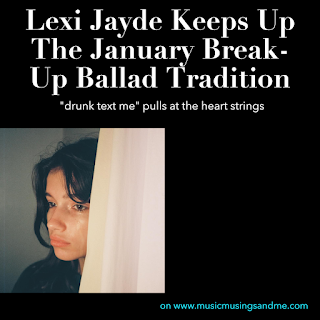 January must be the official month of the break-up ballads with Lexi Jayde rolling out her heartbroken new single "Drunk Text Me" right around the one year anniversary of "Driver's License" taking the world by storm. Another commonality between Lexi and Olivia Rodrigo's music? "Drunk Text Me" gets a production assist from Alexander 23, who I found out about this track from, much like Olivia's "Good 4 U."

In a three page, handwritten letter on her Instagram, Lexi details how this new project was born out of a break-up she experienced last August. When she found out about the betrayal, she told her team that she was scrapping all of her prior work and starting over. This process became majorly helpful in moving forward, and Lexi found the following months produced, "the best music I have ever made, I am so fucking happy with my life, and I'm finally myself again." She concludes the letter by announcing "Drunk Text Me" and this new era of music, "Drunk text me is the first song I'm releasing from my heartbreak, and it's going to be the start of a new chapter for me."

The song starts off with a singer-songwriter blend of hollow, acoustic guitar and her thick, smokey voice as she begins to unfold the story. In this post-break-up haze, Lexi paints a picture of her confusion and pain as she watches her ex live their new life without her. "Shouldn't you be sad right now / Said you never liked big crowds / Acting like your like them now / Without me," she opens the first verse. She hits at the classic frustration of a break-up seemingly landing harder for one member of the couple than the other. She also touches on the idea of a complete personality 180 that makes it all the more confusing. She closes the second verse by doubling down, "Cause you're with your friends all proud / At some shitty bar downtown / Do you taste me on her mouth / Or is it just whiskey?" Lexi already proves herself to be a vivid and detailed storyteller with a witty edge.

In the pre-chorus, she goes back to restate the first verse in plainer language, singing, "Hooking up instead of healing / Wanna know just what you're feeling now / What are you feeling now?"

The chorus opens up with a dramatic flourish as her voice swings wide with the anguish rushing in. "I want you to drunk text me / Saying you still need me / Tell me I'm not like her / I made you happier," she starts. Instead of trying to understand, she just wants everything to go back to how it was. She wants one of their confusing, drunken nights to end with an admission that they're still in his head. She just wants that vindication that she's not the only one still hung up. "I want you to drunk text me / Just empty it all out, please / Tell me you fucked this up / Tell me you're still in love with me," she ends the chorus. Lexi doubles down on the fact that she doesn't just want resolution, she wants the chance to go back in time.

In the second verse, she continues to get further into her head about what she really meant to them if they could go and cheat on her in the end. "Wondering if you regret / All the shit you never said / That you slept with her instead / Like we never mattered," she sings. This verse digs farther into the fact that beyond losing a person she thought she loved that this relationship has taken a blow to her self-esteem, and that's why she's so desperate to hear them admit they were wrong. "Or do you even care at all?" she questions as she continues with the verse, "After the pain you caused? / Do you know that I'd still pick up the phone if you called?" The final admission stings the most because it's abundantly clear that in such a fragile state, she'd come back if there was the slightest indication that they wanted her to.

The song has an interesting double bridge situation. This could just be from Genius labeling the third verse of the song as a bridge too, but I like the idea of the bridge moment where everything turns around and changes being broken up by a repetition of the second half of the last chorus. Even in the big turning point moment, it's made extremely clear to the listener that she hasn't healed enough to consider changing her outlook. Also, the melody of the two bridge parts stays consistent and is a departure from the verse melody.

She starts, "Cause I'm not closer to closure / Wish you weren't sober / We're over, but I'm not over it." Here, it almost feels like closure for her is not an explanation or an admission of regret but simply wanting  them to take her back. Then the chorus comes in and she finishes the bridge with the most clear, insightful revelations of the song, "I hate that I still want you / I don't want to, but I want you / Look what you've done to me / I hate that I still miss you / I don't want to, but I love you." This stream of conscious admission gets to the heart of how cloudy your head is in the midst of a raw break-up. What you consciously know is best and what your impulse for normality wants is in a constant battle.

"Drunk Text Me'' has me thoroughly intrigued, and I'm excited to hear what Lexi Jayde has up her sleeve next in her new break-up navigation project. The palpable emotion in her voice as she sings, subtle production, and strong storytelling skills meld together for a perfect break-up anthem. She ends her letter about "Drunk Text Me" in a much more healed and hopeful place than the song itself. She writes, "And just remember if you're going through something that feels impossible, there is a way out, you will make it through."

A Swiftie Tests Out the Peloton Red TV Workouts