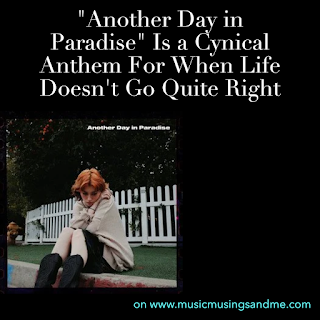 How did I not know Kailee Morgue till last night? That has been a serious oversight on my part.
I was clicking through Instagram stories last night, making sure I didn't miss anything from this Friday's new music drop when I found "Another Day in Paradise" on a friend's Instagram story. I was intrigued by the cover art and clicked right over to Spotify where I was wrapped up in this lyrically packed, cynical track that also has a loud, cathartic, and nearly breezy feeling to it. It's the perfect apathetic shrug foisted on top of a mind twisting with worries.
A bit of light googling told me that Kailee started with YouTube covers, as so many of my favorite artists have, and got signed to Republic in 2017. She has an interesting blend of dark and light as her voice sounds very high pitched and sweet and creates a fascinating contrast to her dark, twisty stories. She's released quite a bit of work, but "Another Day in Paradise" seems to blend closest with her 2021 single, "Butterflies," which this release was packaged with.
Kailee immediately struck me as such a cinematic writer with bold, bright statements that are impossible to click away from. The song opens with the lyric, "I've been sitting on my bedroom floor, burning everything I own." She goes on to describe her life as a "fucked up freak show" and laments ruining everything yet again, but then she flips the disappointment on its head adding, "And I hope it never ends," before rolling into the chorus.
The song pushes perfectly into that spin on the manic pixie dream girl, Tumblr era as it progresses, which is right on trend according to Vogue. "Everybody tells me I need fixing," she sings in the pre-chorus, "I think that they don't know what they're missing, trust me." In the chorus she talks about the darker edges of life and the frustration of the days, weeks, or months where you feel like you just can't win. "That's just life, kicks you whenever you try," she sings as the chorus punches in with a wave of drums and electric guitars. In a soothing, almost lullaby-like tone she sings, "It laughs when you cry / And keeps on moving til you die / It's okay, it's alright / It's just another another day in paradise." The wink of humor keeps a rather hopeless song in check with an edge of the tiniest sliver of optimism. In lieu of a third verse after the bridge, she changes up the chorus singing, "That's just life, kicks you down the harder you fight / It laughs til you cry."
In the second verse, she goes back to the depression glorifying tropes and points to the bleak reality of them offline. "I spiral in self depreciation, pity party celebration," she laments. "Never seeing things for what they are / And sadness teases my temptation, coming off my medication / Everything you need to be a star," she finishes the verse. I love how she takes a moment to acknowledge that the same self depreciation that can win you points on the internet can also be completely destructive to your self esteem. She also points back to the harmful, outdated narratives around creatives and stars needing to let their mental health struggles go unchecked for the sake of creativity. A nod towards these toxic tropes and a rejection of them helps ground the song.
The bridge offers another small slice of hope, though, pointing out that even though life might be hard, there's always an alternative path—another door that will open when the first one closes. "It's just another day, I know it won't change / It's just another day, it's just another day / It's just another day, you'll find another way," she encourages the listener, no matter how subtlely. There's a silver lining even in the bad moments.
In her Instagram post about the song and video, she says that this song is "about how weird it is trying for feel 'normal' in LA and how content we are with our messy lives." That line made me realize why I so immediately connected with this song as I'm still trying to find my footing in LA as well. While I loved the contrast between the lyrics and the sonics before, it also makes the production make so much sense. It offers the same feelings of feeling lost and sad while the sun keep relentlessly shining. The song becomes an anthem for those rough patches of life as the sunny sonics blend with the self-defeating apathy of the lyrics. I will definitely keep my eye on what Kailee Morgue has up her sleeve next.