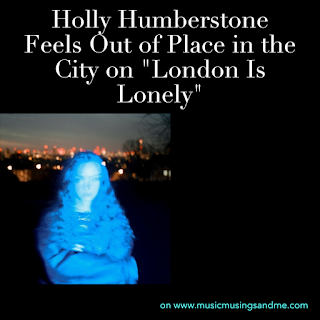 This morning, as far as US timezones go, Holly Humberstone released a brand new single, "London Is Lonely." Back on January 12, Holly sent her newsletter subscribers a preview of this new release with a SoundCloud link to the first ever demo of the song. From the second I hit play on the demo, I was immediately swept away in this gorgeous, aching piano ballad. I'm glad it's been officially released so it can take its rightful place on my January playlist.

In the newsletter, Holly discusses the origin of the song saying, "I wrote this song back in February 2020 right before the pandemic hit here in the UK and I still really connect to it despite how much everything has changed." She goes on to say that even two years later, she still doesn't quite feel fully settled into her new home in London. "I'm still adjusting to London, trying to find my place here and make it my home," she continues. Having recently moved to LA back in August, I relate deeply to Holly's music as she often sings about how hard it is to adjust to a city that doesn't quite feel like a perfect fit and how difficult it is to take on being a newly minted adult at the same time. "London Is Lonely" feels like a natural continuation of her late 2021 EP The Walls Are Way Too Thin.

Holly released two different versions of the song, a 3:54 length track and a 3:27 edit that is more perfectly in line with average song length. This feels like an interesting symptom of the TikTok era trend of pushing songs to be closer to 2 minutes while still sharing the full version for those fans who want the entire experience. Artists like Billie Eilish have recently adopted this practice with certain longer songs as wel.

"London Is Lonely" revolves around feeling lost and out of place in a brand new city and having that feeling exacerbated by also missing a specific person who's coming in and out of your life. Holly continues her knack for writing conversational and straightforward yet poetically tinged lyrics. The first verse brings us into her mix of confusion and longing with a set of images and musings addressed to the recipient of the song. "Started feeling like I'm living in the upside down," Holly opens with the sound of the underground train chugging on behind her with sparse piano chords joining her voice. To match that auditory cue, later in the first verse, she sings, "Started feeling like I see you in the rush hour crowd / Or when I catch you with a stranger in the underground."

In the pre-chorus and chorus, Holly admits that she needs this person in her life but the distance and her fear of admitting that holds her back. Eventually, she has to share that she's not as okay as she wishes she was. "And London is lonely without you / So will you stay? / Cause I'm oh so sick of this place / Feeling way too big and nothing can hold me / Nothing can hold me like you do," she says in a plea to fill both the empty space and the find some comfort in her new city.

In the second verse, she vents more of her sadness about not being quite at home yet. "Any minute now, I swear I'm gonna lose my mind / So many people, it's easy to get lost sometimes / And this winter is going on too long / Though it doesn't snow here / It stays pretty cold and I miss your warmth," she sings, weighed down by the realities of her new world. The song fades with the refrain of "I'm lonely without you."

Holly perfectly captures the struggle of feeling physically out of place and how missing a person can make that so much worse. While many of these lyrics point towards missing a significant other, the sentiment of the song also easily applies to missing friends or family back home. It's almost the realization moment that it's not necessarily a place that you love but the people in it.

I love the stripped back production that allows the honesty and confusion in her voice to take center stage. The additions of the train sounds to open the track is also a nice touch to add a bit of embellishment to the song along with her beautiful harmonies. Sometimes, I have to warm to songs that I end up loving, but this one became an instant favorite.

It'll be interesting to see if this song is a one off single or if it's leading to a new project before she hits the road with Olivia Rodrigo, opening for half of the US leg of the Sour Tour.

Lizzy McAlpine "all my ghosts" Song and Video Review

Finneas "The Kids Are All Dying" Music Video

A Farewell to The Zach Sang Show