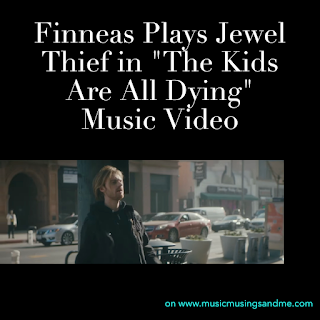 After a successful touring run, Finneas is wrapping up the Optimist era with a handful of new music videos. A month ago, he released a heartfelt tribute to his family with the "Only a Lifetime" video set in an aquarium featuring his parents and sister, Billie Eilish. This time, Finneas stars alone and explores a concept heavy video for the first time. "The Kids Are All Dying" sees Finneas taking on the role of jewel thief as his satirical clap back to the state of the world plays in the background.

In the video, Finneas seems to be personifying the archetype he describes in the verses of the song- a person who has grown numb to the ills of the world and developed a pervasive callousness to everything as the lyric "I tried saving the world but then I got bored" implies. On the other hand, there is a potential narrative where he's playing a Robin-Hood-type character who intends to good things with the money he makes from the jewels. Whether the intent is greed or altruism, it seems the video makes a point about what extreme actions a cruel world drives people to.

While I wasn't originally a huge fan of the song when it came out because it was hard to parse whether the song was intended to seriously be about the fatigue of a hyper-intense world or more of an ironic commentary, I've come to enjoy the song far more, especially after seeing it live. The sonics are truly blood pumping, and I appreciate it more now, though "Can't Wait To Be Dead" still wins for me in Finneas's series of social commentary songs. I think Optimist was an album that needed to grow on me, much like Julia Michael's debut album Not in Chronological Order.

The video opens to Finneas standing on a street corner flipping a large coin like he's looking for direction. The outcome seems to be the moment he decides to rob the store. He slips on a pair of black gloves and starts walking with a combination of swagger and purpose that I've nearly exclusively seen from Finneas on stage. He approaches the double glass doors, looks left and right, and then proceeds to smash the top pain of glass perfectly in time with the musical apex setting in. I thought this was the moment he was going to break into contemporary dance, as he does in many of his videos, but this time he's on a mission.

Once he gets both panels, he conveniently unlocks the door for himself and walks in, which is much smarter than my expectation of him crawling in through the jagged glass. That's about where Finneas's criminal intelligence ends though. He becomes the most lackadaisical thief ever as he surveys the jewelry cases and even does his singular dance move of the video, dramatically grabbing his chin and turning his face to stare into the camera in time with the music.

He then proceeds to smash all the individual jewelry cases, but he doesn't collect the gems as he goes, which is extremely inefficient. Once he's shattered all the cases, he pulls jewelry bags out of his backpack and begins to casually load the gems up with no reverence to the ticking clock created by the fact the cops were probably called when he smashed the front door. As a finishing touch, he decides to play dress-up with the final case, placing a pearl necklace with a tassel over his neck and he removes his gloves to slide on opulent gold rings. It's clear that it's not the spoils of the robbery that are the goal here, it's more of a personal satisfaction.

As the sirens begin to wail and the blue and red lights reflect on his face, he pulls out a spray-paint can and tags the wall, reminding me of Louis Tomlinson's interconnected heist series of videos for his album, Walls. Finneas's tag is a smiley face with a $ in the place of one of the eyes, furthering the potential commentary on greed. And serendipitously as those untouchably lucky people do, he walks out the side door and down the sidewalk, totally free, as the cops approach the shattered front door.

While not the most well thought through action movie, "The Kids Are All Dying" is my favorite music video from Finneas yet. I really like seeing him play with a higher concept video and embodying a character. This seems to mark a new era of music videos for Finneas that involves more planning and investment to make them a real part of the conversation around the song or album instead of a check box on a to-do list. For a relatively simple video, this one really shines.

Finneas Yearns for a Simpler Time on "The 90s"

What They'll Say About Us Song Review