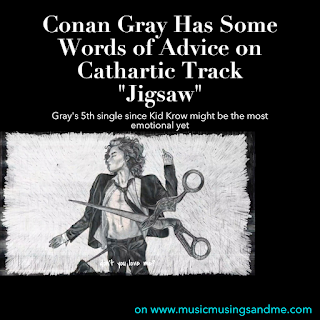 As those of you who've been following this blog know, Conan Gray has been teasing his new song "Jigsaw" since 2021 with small clues across Instagram and TikTok. If you want to know all those steps that led to the song release, you can check out my original post on "Jigsaw."

The song came out on Friday and got to a million streams in half a day. Also, fittingly for the amazing lyrics, the song was also the most searched track on Genius in the wake of its release. I recorded my first listen and lyric analysis for my YouTube channel, and I highly recommend watching it to see my total surprise at the turn this total sad song took in the second half.

On the track, Conan sings about the unsatisfying and nearly devastating reality of changing himself for someone who still won't love him. On his Instagram Live yesterday, he talked about how the song started as a diary entry about changing yourself time and time again in the hopes of love and validation as well as "being miserable and having a bad self concept." Whether it started the cycle is more closely relatable to a family member or romantic relationship for the listener, Conan mentioned that he hopes the devastating song can be a warning of sorts to those who feel they have to change to make someone like them. "It's not worth it," he said on the Live, "people will never end up truly loving you if you made up some version of yourself in order to please them. They're just going to love the fake version of you that you made."

The track starts off quiet and understated with harmonies that almost sound like the whistle of the wind as Conan singings the teased first two verses of the song. This seems closer to the song's original, acoustic origins before Conan brought the song to his producer, Dan Nigro. That's where the industrial sounds that bleed into heavy drums and wailing guitar come in as Conan and Dan worked together to take the song from sad to angry. "I think I just really needed to scream, to be honest," Conan said in the same video. The track becomes electric and cathartic as the realization blooms that maybe his personality and habits were never the issue in the relationship. While the song doesn't fully assert that he's through with wanting to change himself for approval, as he wavers in the bridge, it does accurately display the blender of emotions that is a toxic relationship.

The song is quite reminiscent of the Kid Krow album cut, "The Cut That Always Bleeds," as it follows a similar narrative of ups and downs in a partially requited narrative and navigates between quiet and loud, screaming anguish. These emotive tracks are where Conan truly shines, and he always seems to create his best work in the moments that he's most scared that no one will relate, like with his biggest hit to date, "Heather." Conan always creates his best music when he's able to stay true to his voice.

Many media reports are teasing that "Jigsaw" might be indicative of a larger project sometime in 2022. I'm honestly surprised there's not more word as to when that might be or anything about how the project has come together since December 2019 when Conan wrapped up working on Kid Krow. With five singles out since his last album release and a tour slated to start in March, it seems an album must be on the horizon. I will be anxiously awaiting when that time comes.

Watch my first listen to Jigsaw:

The Astronomy Music Video is Quite the Journey