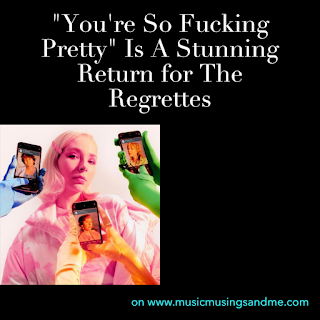 I've only recently started listening to The Regrettes, but I've been highly anticipating this song release for a couple weeks now. They played this brand new song early at their Santa Ana live show, and I absolutely fell head over heels for it. The song has a totally different feeling than their usually loud, in your face, pop-punk feeling anthems. "You're So Fucking Pretty" casts an absolute spell over the listener with its slinky melody and heart-wrenching story.

From the second they started to play the song at the show, I felt like Lydia had hypnotized the rowdy audience with this story of nostalgic heartbreak over swoony synths and a rolling drum track. This song truly highlights how talented of a songwriter Lydia and the rest of the band are and offers the space to absorb the entire arc of a narrative. The song is vulnerable, both in the story it tells and the subject-matter.

Speaking on the song in the press release, Lydia said, "It’s the first time I’ve ever written directly about a girl I had a crush on, and it took me a while for me to even allow my brain to accept the fact that I’m bisexual. I always felt like I couldn’t validate my own feelings because I had never been in a relationship with a girl. But I had a pretty big crush on one of my friends a while ago, and this song is an exaggeration of that, but it’s still coming from a very real place."

While the band's guitarist, Genessa, said she would've loved a song she could fully relate to like this one when she was younger. She also points out, interestingly, just how open for personal interpretation the lyrics are, "I don’t think it necessarily has to be this queer anthem, but I think someone else could listen to it and feel the same way, or someone could feel that way about a boy they like. Boys can be pretty too.” When I first heard the song at the show, I immediately got the impression that it was about a girl, but, to Genessa's point, the more that I listened, the more I realized that nothing in the lyrics explicitly made that point, and the song could honestly be read either way. Because of that, I went digging around online to see if the story of the song had been told so I could write from an informed perspective.

In the first verse, a couple phrases take us to a smokey party scene with a circle of people sprawled on the floor playing spin the bottle. As Lydia imagines what it would be like to kiss the girl she's fallen for, she wonders what kind of relationship the potential love interest is in. "Is she just a friend, or is she going home with you?" she questions in a truly fractured tone.

In the second stanza, she steps into action, approaching this love interest finally. "... my shoes take me to you / my filter's breaking, can you tell her to move? / I think she's in my spot, I'm pretty sure you feel it too," she sings, taking charge of the situation. I love how she describes this blurry scene of almost trying to take hold of her "you belong with me" type feelings and act on them, which almost never happens. Her descriptions are so vivid and poetic that these verses feel like an experience within itself.

The second half of the chorus takes on a completely different character. Now, there's another scene where Lydia is observing her crush in the bathroom fixing their make-up. "In the bathroom / You fix your face / And you're so fucking pretty you take my breath away," she sings. This feels like an extremely vulnerable moment both in the world of the story and also to admit and articulate in a song in this way. Lydia does an incredible job of drawing the listener close so that they experience this rollercoaster with her.

In Verse 3, though, the candle of hope is extinguished as we learn that this relationship will never be. Lydia doesn't just tell us about the letdown. She spools it out in three vivid lines that make it feel lived by the listener. "Drunken secrets spill out of my mouth," she says, implying that she's finally moved past relying on subtlety. "Eat my words up just to let me down / You tell me it's too late, now you're the one who got away," she sighs. For some reason, 'the one that got away' trope will never not be extremely satisfying.

This song is beautiful and vulnerable and also feels like an important track coming from Lydia and The Regrettes as a whole. Even beyond its wonderful layer of being a queer song by a bi girl, the song is so clarifying of a commonly searing experience that it can easily transcend into whatever unique experience the listener wants to paint on it. And that's when you know you've got an incredible song on your hands.

The live performance was so special and felt like a frozen, pinpointed moment that I'm so glad and slightly amazed that the recording was able to capture all of that incredible nuance. It lost none of the magic in that translation, and this single makes me really excited for what The Regrettes will have in store in the future.

Breaking Down My Spotify Wrapped