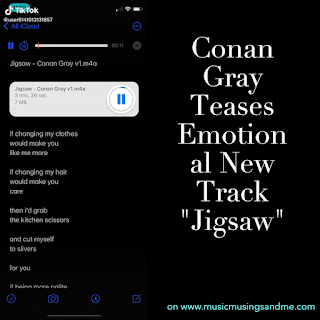 Today, Conan Gray turned 23 years old and received plenty of birthday wishes from fans and friends alike, but the real gift came midmorning when Conan posted a brand new teaser on TikTok. This one, though, looks and sounds very different than the perfectly paired audio and video clips that ushered in his latest two releases "People Watching" and "Telepath." Instead of having a thought-out visual component, this song comes straight from the Notes app.

Another twist that sets this song teaser apart from his now standard pattern of saturating the platform with pieces of his songs for months before they released is that this one debuted on his burner TikTok account which features no profile picture and a TikTok generated random handle. @user6141013131857 is far from shy about his identity, and with 664,900 followers and counting (it increased by 600 followers in the last hour I've been editing this article), the account is hardly a secret, but it is a much smaller, more intimate platform than his main page that has a following close to the population of a good sized city with 4.9 million followers.

Throughout the life of this somewhat secret page, Conan has used it to post silly, random videos that tap into his deeply Vine-rooted heart or offered him a place to let his guard down more and be genuine with fans with more open jokes as well as sentimental content. While blatant promo sometimes slips in, that's not what this side of Conan's internet presence is about, and if you miss Conan's old main channel content, this alternative TikTok home is the place to go.

Which makes it both a strange and perfect venue host this new song, which is currently titled "Jigsaw" in his notes. In the 26 seconds we have of this new track, it's already the most raw, honest, and exposed he's been in his music all year. There's no frills around this first glimmer of the song, and a very intentional focus is put on the lyrics as the only visual is the saved file that he's playing called "Jigsaw - Conan Gray v1.m4a" and the lyrics typed into small stanzas. The audio is simply an original sound from his account without any kind of nickname like when "Telepath" was first uploaded under the name "ur just so predictable". To me, this move, as well as the choice of account, signals that this was more about sharing than it was about trying to start a TikTok trend like all the other tracks. Hopefully, this means that this sound won't get played out before it's released.

I am already head over heels for "Jigsaw," and it pains me to know that we're not likely to get it until sometime in 2022 because the music industry is currently winding down for the year. Still, we can appreciate the small part we do have.

This is the track that feels truest to his debut album, Kid Krow, and it's pervasive character and sound. The dark electric guitar plucking is really the only backing element beyond some stacked vocals that come in at the end. The song taps into the lower end of Conan's vocal range, which is less utilized in his music but just as stunning as his upper registers. It is perfectly sonically aligned with the lyrics as well, which is something I've always loved about Kid Krow, and if I had to guess who's behind the production here, I'd say it's Conan's first collaborator, Dan Nigro. I definitely think that the minimalism of this track is liable to change since this seems like it could be a demo being it's "v1" but I honesty love how stripped back it is. A bit of the vocal melody towards the second half reminds me a bit of the gently up and down melody in Billie Eilish's track, "my future."

Which leads me to another possible theory as to the future of this track. I have to wonder if this is an album track he's been working on for whatever CG2 will be, and it's not slated to be a single at all. Since he's posting what's probably a draft version of the song given the way it's labeled and not promoting it on his main account, this feels like maybe just a song he was genuinely excited about in the process of creating it. Lots of artists, like Alexander 23 and Gracie Abrams, sometimes tease parts of in-progress tracks on their TikToks with no concrete release date, and from the few clues we have, this seems to be a distinct possibility. Also, as "Heather" and "The Cut That Always Bleeds" were standouts from Kid Krow but not original single picks, this doesn't feel like a track his team would lead with for the album either, which may mean we're in for a longer wait here. Otherwise, this could be the final single before the album announcement as Kid Krow was announced after a similar number of singles.

But instead of worrying when we'll get more, let's talk about how amazing what we do have is. This seems like a first verse, and the lyrics are truly heartbreaking. "if changing my clothes / would make you / like me more," is the first stanza which introduces that trope of people changing themselves for a love interest. The second reads, "if changing my hair would make you care," which flips the usual trope in an interesting way. Usually, people change when they're in relationships to fit with their partner, it's a little less common to think to change just to get the hypothetical attention. Also, "hair" and "care" is an easy rhyme, but it works really well here. "then I'd grab / the kitchen scissors," he says, escalating with action in this part. He continues to up the ante, "and cut myself to slivers." Before concluding with a sigh, "for you."

These lyrics feel like a threadbare blanket in a way, worn through from being felt over and over again. It's poetic without being frilly and plays on familiar ideas in ways that feel fresh and relevant. "Slivers" is a beautiful word, and it takes the imagery to a far more dire place than what's originally suggested by the superficial clothing and hair changes. It has a subtle intensity that feels powerful in its brokenness. Also "kitchen scissors" is a really interesting specificity that adds to the image in a way that's oddly striking. Of all the types of scissors, they feels mostly aptly suited to do damage.

There's a small preview of the next line that you can see cut off at the bottom of his screen. It reads, "if being more polite," and seems to indicate that the song starts with a double verse. This song feels extremely vulnerable and ties together many themes that Conan has discussed in the past in videos and interviews when it comes to exterior presentation and perception as well as the common themes in the "Heather" interviews where he expressed that he wished he was more the polite, take home to the parents type. In the original file that went up that's been taken down and reuploaded so that it's not visible, the stanza finishes, "would keep you satisfied / I'd be more like my sister." Again, these lyrics match feelings he's expressed in interviews in the past like when he told Zach Sang about his sister who is a nurse back in Texas and was in quite a few of his YouTube videos who he always saw as perfect. These lines suggest that maybe the song is more about familial acceptance along with or instead of a romantic situation like in "The Story."

This song encapsulates everything I love about Conan's music so much, even in under thirty seconds, so I'm really excited to see how the rest of it unfolds, whether that's soon or after a few months of waiting. This track is a major departure from the bulk of his 2021 releases, and it feels encouraging for the character and variety on this second, mysterious, long-awaited project. Given that his tour kicks off March 1st, hopefully we'll get the album around the top of next year. And on a tour related note, I'm still pulling for his team to add an LA date to the line up.

The Astronomy Music Video Is Quite the Journey