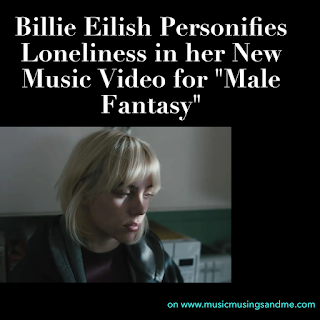 Billie Eilish is always meticulous in the crafting of her music videos and often directs them herself. They're a huge part of her musical world, and she's talked about her plans to make a video for every track on Happier Than Ever, creating a piecemeal visual album. Even though it's been many months since the album released, she's back to add to her cinematic universe with a surprise video for "Male Fantasy." Given that "Male Fantasy" is my favorite song on the album and probably one of my favorites of this year on the whole, I was excited to see how Billie planned to bring such an understated song to the screen.

While Billie's signature videos are full of creepy, spine tingling imagery, the Happier Than Ever era started to redefine what Billie Eilish's aesthetic could be while still holding a couple similar elements through the years. The "Male Fantasy" video is her most stripped back yet, though, and rings extraordinarily true to the reality of the song. She sings about monotonous boredom, meandering thoughts, and a general sense of being loss spiraling out into reflecting on all the parts of your life that are no longer what they once were. It's about quiet endings that whisper away instead of going out with yelling and fights that are awful but offer some resolution. The song captures what it feels like to be stuck between two phases of life.

The video feels both like the embodiment of the darkest of the lockdown period as well as a visual representation of depression - which, how different are the two really? The video opens with Billie singing into a dingy bathroom mirror for the first verse. The line "I hate the way she looks at me" takes on a new meaning in the context of the video as Billie intently stares at herself.

As the song moves along, Billie starts flashing through different rooms in the house. There are creative shots of her standing at the bathroom sink from above, sitting on the couch staring blankly at the TV, and curled up in a messy bed with a laptop propped up on the duvet. As the clips change, we see her move from being curled up in one corner of the bed to another, which truly expresses how the hours go by when getting out of bed feels impossible. Her hair is greasy and messy and her clothes feel familiar, like the comfy, "I've given up" clothes I wear around the house for days on end on when I'm leaving. There's a gorgeous shot of a mirror hanging on the wall that captures her eating cereal at the table.

The clips cut perfectly with the beat as the lilting chorus comes in. Instead of flashing between different rooms, we see Billie move ever so slightly through the same space. From leaning on the kitchen counter to lying on the kitchen floor. Moving through positions around the bedroom, hiding under the duvet, sitting on the floor, holding her head sitting on her bed. It finds a beauty in the monotony without glorifying it. The vacant staring into the microwave as it runs and through the fridge looking for something to eat that might fill the emotional void feels all too familiar.

In the close ups of her face, she makes these indescribable, subtle expressions that perfectly articulate that vacant feeling of depression where everything is foggy and time has no meaning. She floats through areas of the house without ever really being fully present, and you can see the effort that goes into just existing in these shots.

The attention to detail and gorgeous editing really brings the bone-crushing feelings in "Male Fantasy" to life. While this is probably Billie's most understated video, I think it's her best direction work and has really unlocked another level of nuance in her visual work.

The Regrettes Release a Brilliant New Track "You're So Fucking Pretty"

Breaking Down My Spotify Wrapped