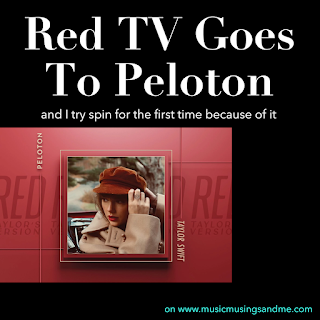 On Christmas Day, Peloton rolled out their final artist spotlight series of the year, this time featuring an artist who has made a blockbuster year off almost a decade old material-Taylor Swift-and her latest release-the rerecording of Red (Taylor's Version). As someone who has existed firmly in the Red (TV) world since its release in November, this announcement immediately caught my attention, and while I don't personally have a Peloton subscription, I commandeered my mother's account to test it out.

There are a number of different kinds of workouts (in a variety of languages even) to choose from in this special Peloton series celebrating Taylor. From quick stretches to running to spin, yoga, and core-work, there's a little bit of everything set to various songs from the album. Even though I've never tried spin in my life, I decided to start there. I was a bit weary of what a Taylor themed workout program would be like but also excited for the chance to workout to music I already love. On YouTube, I've tried a number of dance workouts set to pop music from creators like MadFit and Tegan Dixon, and it's always so much more fun when you can tell the instructor is also a major fan.

Robin Arzón certainly fulfilled that wish. While I can't give a total review of the spin class itself since my non-Peloton bike didn't have the same metrics that she used to guide the workout, I can say that Arzón is a Swiftie through and through. I tend to get bored easily during workouts or have a hard time seeing them all the way through when they get really intense, but I was so invested in Arzón's stories related to every song that the time passed far faster than expected. From being in on Swiftie theories like the car from the year 1989 in the short film possibly being a hint to the next re-recording to telling her own personal stories about where she was in her life when the original version of Red came out and how it helped her as opposed to now, she truly felt invested in both guiding the class and Taylor's music. She even said that she was so inspired by Taylor's work as an artist that she dedicated her first book to her.

Inspired by the lyrics of the song, Arzón often repeated the point that being vulnerable is what makes us stronger. The longer the ride went on, the more it started to feel like a workout turned therapy session as Arzón gave out life advice and comforting affirmations about loving and respecting yourself where you are now. While not related to the Taylor part of the class, I was really pleased to find that the whole thirty minutes was free from negative talk about bodies, toxic tropes like working out to "burn off a muffin top" or get abs, or some of the other less than helpful self image remarks that often come from the fitness space. Arzón really emphasized how the class was all about having fun, singing along, and doing something nice for yourself.

As for the ride itself, it definitely got my heart beating out of my chest, and it was a challenging intro to the sport. While the ride mostly used the upbeat singles like "I Knew You Were Trouble (TV)" and "22 (TV)," she also manage to work in the ten minute version of "All Too Well (TV)" in a way that still kept up a fast pace. As someone who loves working out to the music most people cry to, this was a winning inclusion. It's definitely a class that I'll be taking again.

Next, I moved on to the 20 minute core workout that was also taught by Arzón. My legs being jello at that point probably didn't help my feelings about this class as many of these core moves also involved holding your legs up in the air. Still Arzón was as upbeat as on the cycle, but I think I was also less engaged because some of the stories were understandably recycled. Overall, though, I'm so glad that they found an instructor as truly passionate about the music as the fans are. Her enthusiasm all around made it easy to want to continue the workouts.

This point was made all the more clear by the ten minute stretch session to "All Too Well" that was lead by Ben Alldis. This stretch had me truly confused. After having Arzón for the first two classes and loving her connection to the music, Alldis seemed like he'd never actually listened to Taylor's music before filming the workout. He introduced her as a country artist before mentioning pop as an afterthought and said that he thought he wouldn't like the ten minute version of "All Too Well" when the track was first announced, though he's come around. His general indifference towards the music was a bit puzzling. You'd think that Peloton could've rounded up a few more Swifties for this special program. What was even weirder was that he didn't seem particularly excited or happy about the stretching movements he was leading either. This was disappointing since I thought a stretch set to one of my favorite songs of the year would be the perfect addition to my regular routine.

Still, though, I do want to try out the running and cool down set to Red TV sometime in the next few days. I'm hoping those instructors will be as standout as Arzón because the enthusiasm really does make a difference. Also, it was really fun to see someone be a total fangirl, theories and all, outside of Twitter. The programs seem to be a hit too. When I logged on to the spin class there were nearly 2,000 people doing the ride at the same time. All in all, these classes were definitely worth the hype, and I guess I now have Taylor to think for my new curiosity with spin.

If you want to try out all 9 of the exercise classes, you don't have to have a Peloton bike or treadmill to do the workouts. They have an app subscription that will also give you access to do the workouts with your own equipment at home, and there are a couple that purely use bodyweight and therefor require no equipment at all! There's even a 2 month free trial so that you can get in on the fun without the commitment. And, truly, the music really does help you make it through the workout.

Edit: January 1 I tried the run the other day, and it is just as full of Swiftie magic as the cycling. The instructor was great both in her knowledge and connection to Taylor's music and also having a healthy approach to exercise.

What Era Are We Even In? "Wildest Dreams TV" Release