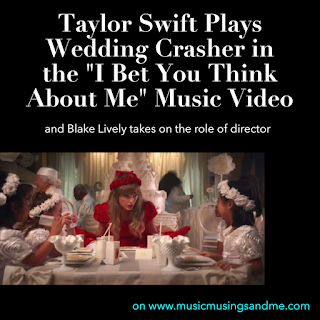 Red (Taylor's Version) is the era that keeps on giving. While Fearless (TV) started to make it seem like these rereleases would purely be about reclaiming her work, Red (TV) has proved we can have heaps of fun while we're at it, adding to the canon of past eras. Not only have we gotten the ten minute version of "All Too Well" and a short film to go with it, but this morning, Taylor dropped the music video for "I Bet You Think About Me," one of the vault tracks.

While Taylor has been in a self-directed phase recently, Blake Lively takes over the role for this video, making her directorial debut. Taylor and Blake have been friends for years now with Blake and her husband, Ryan Reynolds, frequently popping up at Taylor's parties over the years from the infamous 4th of July bashes to her birthday and New Year's Eve parties. Taylor has also borrowed the names of their children (James, Betty, and Inez) for her character's on the Folklore album and sampled Jame's voice on "Gorgeous". So a continuation of their friendship and collaboration is no surprise.

The video is campy, light hearted, and similar to the plot of Taylor's song "Speak Now" as it revolves around Taylor showing up to an ex's wedding. It almost gives a similar feeling to the "Me!" music video off of Lover for how truly over the top it is.

In the opening scene, Miles Teller reads his wedding vows to the camera, making it seem like he's in the middle of the ceremony, speaking to his bride to be. Instead, when the camera pans out, we find that he's rehearsing his lines into the mirror of a very busy public bathroom at the venue.

We flash into the venue, where, counter to every wedding rule book ever, all the guests are dressed in white. Taylor is dressed in an all red bell hop outfit of sorts as she weaves between guests holding a tiny serving tray. She casually steals a maraschino cherry out of one guest's drink and drops red die into the floating rose petal display. It's clear that's she's a hallucination of the groom's there to destroy the evening.

In the next scene, Taylor is in a red gown with exaggerated, rose-like sleeves as she stands next to the decadent five layer cake. On the first layer (or fifth depending on which way you want to count), there are swallows or seagulls printed in the icing. This could be a reference to 1989, her fifth album, where she wore a seagull print sweater on the cover. The top layer of the cake is covered in 13s and 26s. 13 is Taylor's favorite number, and 26 is the track number for "I Bet You Think About Me". Taylor topples the miniature groom on the top of the cake and proceeds to get caught by a little girl. She drags a finger through the cake to lick some of the icing off her finger, encouraging the younger girl to do the same. Taylor nods in approval before taking a fistful out of the cake, revealing it's red velvet, of course.

During the toasts, Taylor shows up in an oversized red suit similar to the office-wear from the "Me!" video and takes the mic, much to the groom's chagrin. To perfectly draw the new Red era videos together, she gifts the bride a red scarf, the most explicit nod to who the song is about. She proceeds to chug her champaign and fall off the stage.

Then she's cast away to the kids table, possibly a nod to how she felt at all of the love interest's fancy events with his older friends. She plays with straws to do a walrus impression for the kids and has them utterly charmed with a magic trick where she pulls a red rabbit plushie out of a hat. In this scene, she wears a new red ensemble consisting of a fluffy red dress, gloves, and a headpiece. She disrupts the party guests in her shenanigans, but it doesn't matter because she's already impressed the most important people of the evening as she continues to taunt the groom.

When the bridge hits and the song slows, Taylor appears in a bridal gown of her own at the culmination of this fantasy. She looks absolutely stunning, and they start to slow dance like a true wedding first dance. For half a second, it almost feels like a romantic reunion. He's been sending long looks her way all evening, and this moment validates Taylor's hunch that that he regrets letting her go. But, of course, a spiteful break-up song like "I Bet You Think About Me" couldn't end in reconciliation.

Taylor breaks away from the dance and heads back up the stairs. When she turns around again, her dress transforms from white to red again. She pulls down her hair and the curtain drops to reveal her band (which features her frequent collaborator, Aaron Dessner, as my favorite Easter egg). As Taylor sings, the room starts to transform in a swirl of red. From the desserts to the flowers to the dress on the cake topper, everything is overwhelmed. There's a rapid flash scene with the entire night flashing before the groom's eyes. One of the shots is a close up of Taylor giving him the middle finger with the iconic Taylor's Version of the Red ring on her middle finger.

(Taylor has a fun history of wearing versions of her merch jewelry in her music videos. One of the first instances of this was the snake rings appearing in the "Look What You Made Me Do" music video.)

This final red dress was teased at the beginning of the Red TV era and is from one of my favorite designers, Teuta Matoshi. If I'm ever famous enough to end up on a red carpet, I've said for years that I'll wear one of their dresses because they're all absolutely gorgeous. Taylor's dress is one of their most elaborate with red hearts sewn on the bodice and a giant, elaborate, ruffled skirt. It's the perfect final look to cap off a triumphant music video.

It ends back in the bathroom with Miles staring into the mirror and seeing Taylor's face reflecting back to him, proving that Taylor truly hasn't ever left his mind, even on his wedding day.

In the credits scene, we flash back to the cake to see Taylor run her fingers through it once again, this time creating two parallel likes that look suspiciously like the album cover for Ed Sheeran's latest album, =. This is a clear Easter egg, but is it hinting at a music video or performance for "Run" or is it directing us towards some kind of collaboration or remix for Ed's recent release? That remains to be seen, but Taylor is definitely not going anywhere any time soon.

All Too Well Short Film Review