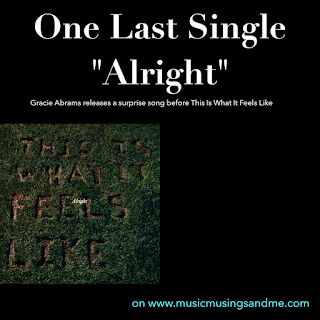 Leave it to Gracie Abrams to surprise us all with no warning. Her debut album, This Is What It Feels Like,  is out for all intents and purposes tomorrow night, but Gracie clearly knows that our anticipation is at an all time high because she's given us a new track to tide us over for the next 36 hours. I actually saw "Alright (Official Audio)" pop up in my YouTube recommended before I saw her post about it, so I ran to Instagram to see if there was some kind of glitch or leak. Luckily, it's neither and is simply a special treat. Having listened to "Alright," I'm glad she's chosen to single out this quiet, lyrical track.

"Alright" is everything I've hoped This Is What It Feels Like will be. There's a clear shift in production and musical choices and a growth and perspective change that's clear in the lyrics, but at its core, it still holds true to all the elements of Gracie's music that makes it exceedingly special and unique.

Over an intricate, finger plucked guitar pattern, Gracie sings about not being alright for just over two minutes. It's gut wrenchingly relatable and sonically unassuming with a lyrical intensity that's immediately arresting. Over the last few years since the bulk of Minor was written, Gracie has honed her skills for fascinatingly simplistic melodies and expanded her imagistic lyrics and the intensity and sharpness in her crafting of pinpointed emotions out of thin air. There's not a lyric here that lacks extreme honesty and brilliance. Also, there's just something so satisfying about a lullaby-like track that deceptively lulls the listener through an absolute depression spiral.

By opening up highly specific wounds to the listener, there's so much space left for connection and bonding. Nearly everyone will find a lyric here that rings true to their own experience, and the unflinching delivery creates an honest space to connect and feel less isolated in the far from pretty emotions.

In the first verse, she starts bluntly, "I still avoid medication / I'd rather take a vacation." As someone who is also intensely nervous about the idea of medication, this line immediately grabbed my attention. It adds to an interesting portfolio of ways Gracie has attempted to improve her mental health with the line in "Mess It Up" where she sings about taking up walking to help her anxiety. "Drive around all of the outlets / Buy things and later regret it," she continues to finish the verse. Again, I also feel guilty of this behavior. Except, I do the version for people who don't have a car: scrolling through Depop for hours on end. Why is impulse shopping so soothing?

She jumps immediately into the second verse referencing that vacation she's musing about in the opening of the song. "Spend a whole week in Hawaii / Fall asleep under the palm trees," she starts, painting a soothing, perfect beach vacation before shattering it in the same way that intrusive thoughts always do, "Down a whole bottle of whiskey / Count all the people who hate me." It's the age old adage of never being able to truly outrun your problems no matter where you go, but the realization is still crushing every time you're forced to live it. The lines are sparse, but they perfectly capture the overwhelmingly nonsensical obsessions that anxiety brings.

The chorus ties it all together as she admits to not being okay and searches for some kind of ray of optimism from anyone who can give it to her. Everyone has felt the echo of this chorus before. "I don't know if I'll be alright / What will it take to make this good? / Someone tell me it gets better / Because for tonight, I'm just not alright," she sings. These are all thoughts I've had a million times, and I love how she leaves it open-ended. Tonight is bad, but tonight doesn't necessarily have to be forever. Also, it takes a lot to plainly state "I'm not alright" which allows the chorus to pack a much stronger punch.

In the second pair of verses, she brings in more of the repercussions of this for an outside relationship. "What if I drove to you backwards / Jump in the shallow end headfirst," she sings, crafting these highly intense images. The starkly poetic lyricism is classic Gracie. "Jump in the shallow end headfirst," is such an extreme yet unassuming image to throw in as a second line, and it's stuck with me through the first repeat listens. "Burn my emergency contact," she continues, "Run for the hills when it gets bad." The hints of reckless devotion almost as a means of self harm starts to thread through this song in a way that ties it back directly to major themes on Minor.

In the fourth verse, she questions the final steps of adulthood and almost the particular stuntedness the pandemic created. "What if I never moved out? / I'd live in the basement my whole life / I got chills when I said that / I never thought of a fallback," she sings. This is definitely a thought that I think most people teetering on the terrifying edge of adulthood have experienced, but it's also extra interesting in the context of the pandemic. Gracie had moved out of her parent's house to go to college before she took a leave of absence for her career, and when COVID hit, she moved back into her parent's house as many college kids and young adults did, which disrupted that classic, linear launch story. It's hard to know how to start that process over. In another way, she's musing about the possible side effects of if her career hadn't worked out. She clearly doesn't have to worry about that now, but the terrifying realization that there is no fallback and there's nothing else you'd really ever be happy doing definitely adds to that melting thought spiral. This last verse in particular highlights how this whole song feels like the uncertain panic of early adulthood.

"Alright" is a quick, quiet whisper of a song, but every second is extremely impactful. With the opening track ("Feels Like") and the closing track ("Alright") already out, This Is What It Feels Like has everything perfectly in place to be a stunning debut album. This new single being the closing track of the album gives it a worthy place of importance and the space that it needs to breathe without being rushed into the next track. This is one that deserves the chance to truly settle in. I can't wait to finally hear the rest of the project very soon.