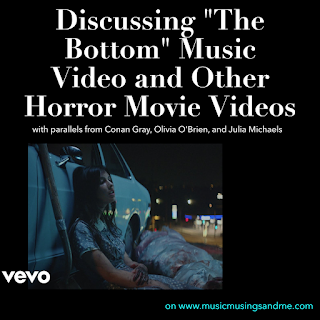 Even though Halloween was a few weeks ago, Gracie Abrams is serving up a last minute addition to the scary movie scene with her new music video for "The Bottom" off her latest project, This Is What It Feels Like. The song chronicles the story of a narrator who feels too flawed for a relationship and a love interest who lets down their guard right as she's telling them to run. Taking the concept of having baggage and dragging your lover down with you to the next level, Gracie takes on the role of murderer in the new video.

The special effects department didn't skimp on realism when it came to crafting the bloody crime scene or wrapping up the dead body for her to drag out of an apartment building, into her car, and into the hills of Los Angeles to be buried once and for all. While many gory videos feature obviously fake effects, this video goes all out, following a recent trend of potentially off-putting music videos in pop. There's definitely a fine line with videos that take on violent themes have when it comes to realism, but the actions here feel benign enough to avoid being totally traumatizing. Unlike some recent videos in a similar vein, Gracie doesn't actually hurt anyone on screen and makes one of the more artfully done videos in the space.

It is interesting, though, to put the video in conversation with other similar music videos in the genre. I immediately saw comparisons of "The Bottom" video and Conan Gray's "Comfort Crowd" video all over Twitter. The parallels are definitely apparent as the videos follow similar story arcs of dragging around bodies by the sneakers and digging graves with garden shovels. Conan's video has an added meta-narrative of the victim being a different version of Conan himself, and the video really hones in on the idea of a death of a part of yourself and also the spirit of loneliness conveyed in the song. While the "Comfort Crowd" video does actually feature past Conan being taken out by a shovel to the back of the head, I find his video the most benign of the group because of the constant injections of sarcastic humor throughout and the relatively minimal use of bloody or realistic special effects. Gracie offers some moments of levity as she dances around in front of her car to a firework show and down the stairs, but there's less of a wink in the plot of her video.

While "Comfort Crowd" is definitely the best frame for frame comparison, the two videos that came to mind for me when I watched "The Bottom" for the first time were "All Your Exes" by Julia Michales and "Sociopath" by Olivia O'Brien, which differ from "The Bottom" and "Comfort Crowd" in that their songs also use very creepy, violent, and Halloween-like framing to go with the videos. I find Gracie's video to be more successful than either of these two other videos simply because Gracie toed the between creepy and off-putting better. They do make better comparisons, though, because these videos play on the same character trope and romantically motivated situations.
"All Your Exes" centers around a doomed dinner party where Julia invites over all of her boyfriend's exes to systematically murder them and then host a dinner party with all their tied up corpses. It features two actual mostly on-screen murders with a baseball bat and at the end (most graphically) a chainsaw. There is plenty of fake blood to go around, and the make-up artists definitely went for realism when making up the corpse girl dinner party attendees. I actually hadn't watched the video all the way through until now because it genuinely made my stomach turn. There is something about the body in Gracie's video not being a character, not being visible, and not having a stated cause of death that provides a bit of necessary detachment for me to find the video a bit less troubling despite offering an equal amount of fake blood to Julia's.
Of course, I decided to leave the most disturbing for last which brings us to Olivia O'Brien's music video for her song "Sociopath." Funnily enough, they video features a bunch of my favorite YouTubers who came up on the LA scene alongside Olivia. Similar to Julia's video, the premise here centers around a house full of unsuspecting people gathered together. It starts with a lengthy preamble scene of a sleepover event where all the friends encourage Olivia to invite this new guy she's been talking to over. It turns out that he happens to be a serial killer, and her friend Stassi is the first to find that out when she steps outside to take a call. This video is incredibly violent with on screen deaths, a gratuitous amount of fake blood, and plenty of screaming. At the end, Olivia turns the tables and is seen stabbing the killer multiple times, creating gushes of blood, and then, similar to Gracie's video, has a singing montage absolutely covered in fake blood. I truly cannot stomach the level of violence in this video, and it definitely didn't create any more positive associations for the song.
Having thought through the examples of all of these videos, I think the success of them for me comes down to on-screen violence and intent. Like Conan's video, Gracie's has a wink of absurd humor and exploration of this character who has taken things a step too far. The most violent moment in the video is Gracie accidentally hurling the body down the stairs in an attempt to get it out of the apartment building, and even then, the body is essentially a mound of wrapped plastic with two socked feet sticking out the end. There's plenty of implication of what happened, but the violence isn't the point of the video the way that it is in Olivia and Julia's. The irony of the situation anchors the entire video as well as the parallel aspects like the vintage aesthetic and cinematography.
It is interesting to see, though, the continued popularity of the scary movie/horror film inspired videos and all the different ways that they can be played with access to advanced special effects, CGI, and more. From shock value to sarcasm, the options are endless.
If you want to hear my actual, detailed breakdown of Gracie's project, I posted a full length video getting into all the details of the lyrics and production on my YouTube channel, and I highly recommend you go check that out as well.
More on Gracie Abrams
Alright Song Review
Ranking Every Gracie Abrams Song
Gracie Abrams @ the Roxy