DACEY's New Track "BITTER" Has Me Swept Up In The Melody 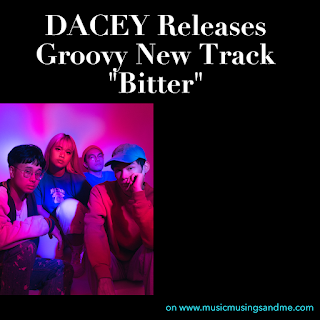 DACEY is a band that's hard to pin down. Probably most easily describable as vaguely indie, their songs create a blend of alternative R&B, bedroom pop, lofi, and even jazz depending on the song and even the specific moment. It's an eclectic mix and one that was hard for me to wrap my head around on paper, but tied together on their new track, "BITTER," it just makes sense.

The Vancouver-based band is led by front-woman Dacey Andrada, who the band's namesake. After meeting her bassist, Joshua Akow and guitarists Nathan Chan and JT Tecson at the Nimbus School of Recorded Music, the band took off running. While quarantine originally slowed down their creative process, they've come back strong in 2021 with the release of "LUV U A LIL BIT" in September and "BITTER" in November.

What captured my ear about both of these songs was the outstanding melodic sense and groove present here, which honestly caught me off guard. I am 100% a lyrics first and lyrics always kind of person, and it usually takes me a couple listens to genuinely form an opinion on melodies or production. Both of these songs presented a totally opposite experience for me where I hardly registered the lyrics when I listened the first few times but was totally swept away by the entire experience of the song. The melodies just sink into your skin and the percussive elements have an undeniable sway that sets the mood.

There's also an incredible amount of sonic texture here that leaves so much for the brain to comb through on every repeat listen. The entire band's training in production as well as composition and their obvious fascination with sound itself is evident in their music. The songs are highly informed by the feeling and experience of the audio as an almost independent facet of the song itself.

Their latest track "BITTER" takes on an interesting part two twist in the final third, stopping and rebooting into a brand new sonic landscape to finish out the song- much like Lorde's iconic Melodrama moment "Hard Feelings/Loveless". The vibey, swirly, nearly '70s feeling production cuts out and makes room for just Dacey's voice with what sounds like an ukulele strumming along. Back to the textural emphasis, there's nearly an underwater, spacey quality that makes it clear that there's more happening than just a voice and instrument blending. That quickly evolves into an epic drums and guitar solo moment that reminds me of the collapse in Billie Eilish's closing track "Happier Than Ever". It's this final third of the song that truly makes the track for me, and I love how we get a taste of the ending sonic palette right at the opening of the song in a short interlude before the song really begins. I didn't even register how surprisingly circular the song was until it starts looping through my Spotify. DACEY epitomizes the newly found irreverence for genre in a truly fascinating way.

Check out DACEY on Spotify or Apple Music.

So Many Cherry Songs: Every Song Called "Cherry" I Could Think Of