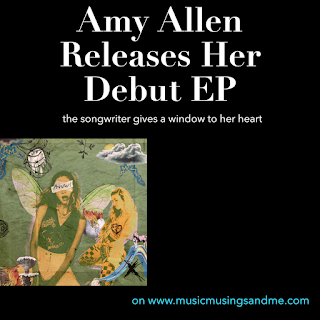 Amy Allen's artist career has been one of my favorite musical developments to really take off this fall. I'd been aware of her as a songwriter and vaguely as a artist prior to the last few months, but after seeing her open for JP Saxe in LA, I've truly fallen in love with her confessional, indie pop-rock songs. Her debut EP AWW! offers a five new songs plus her prior single "A Woman's World" to add to her growing solo catalog. These new tracks are among my favorites yet.

"RIP" opens the EP and starts it on an incredible high note. The track is the main single which has won it a music video featuring Rebecca Black. On the track, Amy takes on a subject that is highly specific to the world of songwriters in the most satisfying, spectacular way. Instead of an homage to death, the title alludes to a "really insecure person" as she sings about someone who basically took credit for her work to ride "a rocket ship to the stars on the back of my heartache". She calls out this person for "acting all poetic" while also being highly insecure and fake as they're becoming adored by the world. She has the unique perspective from knowing the person well to see through the veneer, but that still doesn't change the unfortunate situation. The direct nature of the lyrics and extreme specificity create a clear picture for the listener while the thrashing guitars and aggressive drums in the chorus invite you to pour your own anguish and frustrations on top of Amy's story.

Among an EP of strong stories, "Staircase" stands out as Amy reflects on her early days in LA after moving out from Maine. She combines a breezy, undeniable chorus about the confusing, unpredictable nature of life with direct images and anecdotes in the verses. The opening verse actually made me pause the song to absorb the weird time loop feeling it sent me into. "I met a girl last night/And she reminded me of me/I was 17 and fucking green/And for a minute I had it figured out," she reminisces. The rest of the song captures just how fleeting that sense of control was.

Throughout the chorus she reflects on the ups and downs of life casting it as a staircase rather than a rollercoaster. "Maybe life is a/Goddamn staircase, u /think ur close but ur/So far away from/Being happy but/Man that’s ok cuz/We go up and come/down the same way," she sings in a way that captures the comfort and frustration of this fundamental truth about life. It can always get better, but it can also always get worse. In other parts of the verses, she thinks about some of the costs for arriving at a few major summits like becoming more disconnected from her family and the isolation of being alone and young in a brand new city on a brand new coast. As someone who just moved to LA, much closer in age and life experience to that 17 year old girl, and with many of the same aspirations as Amy, this song has stuck with me the most.

Throughout AWW!, whether she's discussing rocky relationships, loving someone struggling with addiction, starting over far from home, or the patriarchy, Amy doesn't flinch away from telling the entire truth in her lyrics. She has that fearless quality that invites the listener to come sit with her for a while. The EP offers the kind of honesty that will cultivate a lifelong fanbase.

The entire EP offers a phenomenal collection of stories and a thorough introduction and backstory to Amy Allen the artist and person who also happens to be one of the best songwriting talents out there. I'm excited to see where her artist career will continue going, and if you're going to see Amy open for Alexander 23 on one of his upcoming tour dates I am incredibly jealous of you because that is one of the most incredible live line ups I've seen in a while.

Listen to the EP on Apple Music

Listen to the EP on Spotify

Alexander 23 Oh No, Not a Tour Concert Memory