Jeremy Zucker Proves Remarkably Consistent with the Release of CRUSHER 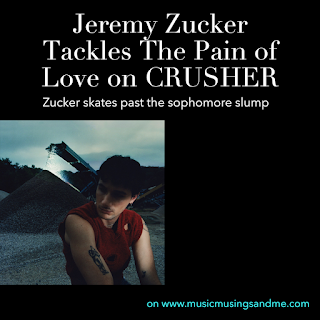 Jeremy Zucker's gift for consistency amazes me. Absolutely amazes me. After releasing love is not dying in April of 2020, I was surprised to discover we were getting a new album project from him, but on October 1, CRUSHER arrived. Aside from the aesthetic switch from all lowercase to all caps titles, CRUSHER feels like an effortless continuation of on the ruminations of love is not dying. CRUSHER has its own unique standout moments and shows so much growth, but I also find it beautiful how it retains the best qualities of love is not dying along with pieces of the storyline.

There's more anger and resentment that courses through CRUSHER than the prior album, and that informs the sound leaving more room for shouting and punk and rock inspired notes mixed into the usually sparse pop arrangements. Despite these hotter emotions, there's still a cool sincerity on these tracks, and as angry as Zucker might get with his love interest, there's so much love that's fueling it as shown on "Cry with you" and "Therapist". Every irritation on songs like "HONEST" and "Deep End" is made sharper by the knowledge he would move heaven and earth to make sure she ended up okay.

CRUSHER is about the pain of loving a person struggling with addiction and the pain of ultimately being forced to put yourself first and escape a toxic cycle. On "I can't look at you", he sings, "You told me that you're sober/But get high with your friends/You said that you were younger/And substance pulled you under/I shoulda known how this would end". Those fingerprints touch every track and create an incredibly consistent, well packaged album that flows effortlessly. Along with lyrical and story consistency, Zucker carries over his remarkable sonic consistency from love is not dying. Each track, while more defined on CRUSHER, still melts into one another with the next song on the tracklist picking up where the last left off. It creates an all consuming effect, and I was left totally surprised when the last song ended and suddenly thirty-seven minutes had evaporated into the arc of this relationship.

This is what makes CRUSHER a skipless album. Instead of operating as individual tracks, it's one story, one sonic experience. I have favorite tracks, but I find myself wanting to experience the album in its entirety over and over again. This album holds a similar sonic pocket to Lauv's how I'm feeling and Alexander 23's Oh No, Not Again! where it is remarkably unobtrusive but so rewarding if you do give the album your full attention to comb over all the details.

As far as songs that immediately caught my attention, "i-70" is probably my favorite, "Deep end", "Cry with you", "I can't look at you", "Therapist", "Sex and cigarettes", and the more I try to choose favorites, the more I realize I'm about to list the whole album. There are so many good lines and soothing melodies dotted all over this album it's hard to single certain songs out as the "best".

Since I don't really know how to sum up an album like CRUSHER, I'm just going to leave you with some of my favorite lyrics from my favorite songs on the album:

there's cemeteries and dairy queens as far as I see, midwest iconography- i-70

I don't wanna move but I can't sleep in- Deep end

it's been a while since you said/if I don't get famous, I'm better off dead/so please, stick around for a while/cause there's a whole lot that'll make you smile- Cry with you

you compliment my sweater, I think I got that shit online- I can't look at you

I'm waiting for the hurricane/you're spinning out and I'm in the eye, dying inside- Therapist

I'm not afraid of love, I'm afraid of us- Sex & cigarettes

You're a runaway truck, I'm a guy on a bike- HONEST

July Pop Releases That Are Not to Be Missed