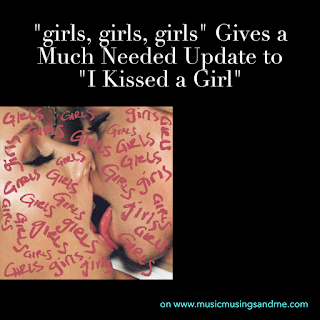 Fletcher is back with a new electric party song with her single "girls, girls, girls" produced with Kito. This single is most similar to her spring of 2020 single "Bitter" in its catchy lyrics and danceable beat. Fletcher has been waiting with this single in her back pocket for a while now as she's been teasing it on TikTok for months. At first, I thought the chorus, which interpolates Katy Perry's "I Kissed A Girl" was just a rewrite of the song she made for TikTok, but it turns out it was the starting point of a brand new single.

Fletcher is the perfect artist to take Perry's smash hit and give it a new spin that directly hits back at some of the more negative elements of this song that made the idea of kissing a girl into a rebellious act for a fleeting moment. While the song was a bold statement by 2008 standards, I'm glad that Fletcher uses the extremely catchy melodic hook and framing of the original song to insert lines like "Go tell your mom it's not a phase/Cause I kissed a girl and I liked it" and "I kissed a girl and she liked it/It's better than I imagined". Leave it to Fletcher to turn the song into an unabashedly queer anthem that doesn't leave a hint of question about being bold, proud, and excited about the night while combatting the harmful idea that bisexuality is just a phase or cry for attention.

The song doesn't borrow all of its elements from the original "I Kissed a Girl", though. The song sounds entirely different outside the couple retooled lines. The first verse paints a picture of spotting a girl across the club and having an instant connection with her. She weaves in smart lines like, "You were in the corner/Hanging like a masterpiece" and "You're leanin' in close to me/Tuck your hair behind your ear/I put my finger through the loop of your jeans". These concrete details mixed with a low, slinky melody in the verses set the direction of the song on a path entirely of its own.

At the end of the song, Fletcher repeats the motif of the song, "I kissed a girl/No surprises/I really, really liked it".  She closes the record with a little laugh at the end that absolutely makes the song. For a signer who has defined her career around being proudly bisexual, these lines are a cute wink at the interpolation and her wider career. The song is a ton of fun, and it feels like the last few lingering moments of summer.

This song also updates "I Kissed A Girl" in another important way. Fletcher wrote the song and produced it with Kito. It's so rare to see women in the producer position in the pop world, and I love how Fletcher's team is always so female focused behind the scenes. Who you choose as collaborators are so important, and given the original team behind Perry's "I Kissed a Girl", this particular update is imperative.

It's unfortunate to see Dr. Luke's name in the credits of such an empowering, bold song after so many horrible alleged details have come to light his ongoing legal battle with Kesha. Working behind the scenes and with some of the biggest women in music in the 2000s and early 2010s, Dr. Luke's future profits and legacy is entangled with artists like Perry, Kelly Clarkson, and Kesha herself which makes it far less clear what the moral answer is with approaching work he was involved with in a far less visible way than most separation of the art from the artist conversation. Clearly, this isn't an issue for many because he still continues to work just fine, producing tracks like "Say So" for Doja Cat. This is in no way a fault of Fletcher's as she just wanted to use a song that defined the early 2010s from a main pop girl. It just starts to bring up more difficult larger questions that some interpolations can create.

On the whole, though, Fletcher has delivered yet another incredibly catchy bop to dance to in the club or in your car. I love how she updates such an iconic song to make it an unabashedly queer anthem and how she took such a well known song and made it entirely her own.

After releasing her second EP, The S(ex) Tapes, last fall, hopefully Fletcher has a debut album coming together on the horizon.

What's In My Earbuds September 2021

Sody Goes In a Brand New Direction: "Bitch (I Said It)"

Artists of the week Singles Song Reviews What's In my Earbuds