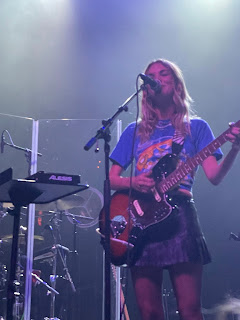 Amy Allen has been at the center of the pop songwriting since Scott Harris introduced her to the possibility of moving behind the scenes to write for other artists instead of taking the stage herself. In 2018, she put her band and the idea of a solo career on pause after writing "Back to You" for Selena Gomez and moved from the East Coast to LA. It was clearly the right choice at the time because she went on to write on so many incredible and iconic pop tracks of the 2010s and 2020s with credits on many of my favorite projects with Halsey, Fletcher, JP Saxe, Niall Horan, Alexander 23, and Harry Styles.

As someone who scrolls down to the credits before I've finished listening to a new song, I was already very familiar with Amy's name when I saw it on both JP Saxe and Alexander 23's tour posters. Still, I had no clue what to expect from this pop chameleon who has facilitated so many incredible stories for other artists. I decided to wait for her live show to find out.

On October 19th, I went to JP Saxe's headline show at the Fonda where Amy was opening. She took the stage with one of her guitarists and co-writers. I immediately got the sense I was going to like her solo music purely based on her fun leather skirt and knotted band tee. 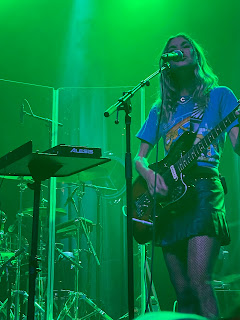 By the time the set was finished, my friend and I had both become Amy Allen fans and agreed we had to head to the merch table at the end of the show for a chance to meet her. She was incredibly sweet in the few seconds we got to talk to each other, and I found it a little surreal to have the chance to talk to a songwriter that I've looked up to for years now. My friend even picked up her merch shirt and showed up to class wearing it the next day. I walked both to class and back home the next day with the handful of songs Amy currently has on Spotify looping through my AirPods.

Though she still has yet to release her debut album, the singles she does have up are well worth a listen. My favorite, both live and recorded, is called "One" where Amy tells a story of disillusionment and frustration with a world that feels so large, unknowable, and uncontrollable. My anxious, pessimistic little heart immediately was drawn to the first verse that dashes a bit of sarcasm on a defeatist list, "The good days are melting/The icecaps are gone/The pop star's in heaven/The right turned to wrong". I love how she switches up the cliched phrases by mixing and matching their endings in unexpected ways that still make perfect sense. This record was co-written with Blake Slatkin, who I know as Gracie Abram's boyfriend and main collaborator but is a successful behind the scenes as a writer and producer in his own right. While I wouldn't have guessed it, Blake's involvement made immediate sense. While Amy's music leans farther towards rock than Gracie's, there's a definite thread that makes their music perfect for each other's fans. 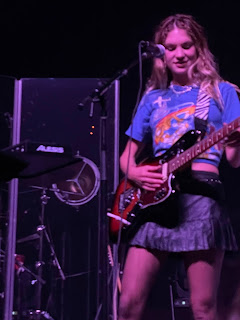 Another favorite from the set was "Queen of Silver Linings" which has an undeniable hook line, "Call me the queen of silver linings/And you can be king of good intentions". The song clings to a theme that I always find myself falling for in art- hopelessly hopeless devotion. As storytellers, we have a real propensity for editing situations to fit the superior narratives in our heads. I'm definitely guilty of making characters out of people in my head until their actual personality is distorted out of existence, and this song speaks to this exact toxic tendency. "No matter what you do, no matter what you say/I'll always find a way to love you," she sings to finish the chorus. While far from romantic, it is relatable. In the second verse, she uses one of my all time favorite lines, "And I'll write a happy ending/Leave out the parts worth forgetting/When it hurts like hell." With more melancholy swing and less punchy electric guitar, this song grabs hold of your heart with both hands.

The point of the set that had my friend and I immediately turning to look at each other in excitement came with the outlier track, "Woman's World". Blending meditations on our patriarchal society with the power structures of romantic relationships, Amy takes a sweeping, almost lullaby-like tone.

With a background like Amy's it's no surprise that her songs are incredibly well crafted, but she also stuns with a truly unique artistic voice blending thoughtful lyricism, interesting melodies, and a fascinating sound that crosses through rock and indie pop. I'm incredibly excited to see where her debut album goes now that she's taken a step back from songwriting for others to tell her own stories. She's also an incredible live performer, and I would highly recommend seeing her on tour this fall, either opening for JP Saxe right now or when she crosses over to open for Alexander 23's tour in November. I'm so sad that she's not on the California run of Alexander's tour too (even though it would be physically impossible) because I would love the chance to see her again. I'll definitely be there when she's ready to go on a headlining tour.