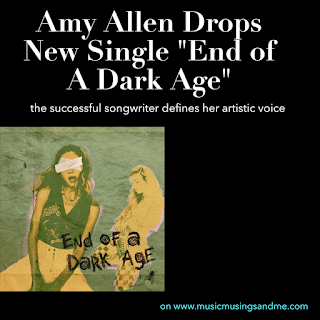 Amy Allen has been out on the road opening for JP Saxe on his latest headlining tour, and now her music releases are picking up as well. After debuting "End of a Dark Age" live on stage at her recent sets, she released the track on Friday to streaming services ahead of a larger project that is still in the works.

This new track makes her seventh official release as an artist despite the countless hits she's written with and for other artists. From Halsey's "Without Me" to Harry Styles's "Adore You", Amy has no shortage of credits to her name (go check out her Songbook playlist on Apple Music for even more incredible examples), but she's still defining herself as an artist both in live music and online.

"End of a Dark Age" further cements the sound that she's been cultivating over her most recent singles taking an indie pop-rock feeling and blending it with clear singer-songwriter sensibilities. The track is relatively stripped down, letting her emotional vocals take the lead with live sounding electric guitar filling the hollow space around her. With some light harmonies and casual drums to help progress the song, she keeps the production relatively simple to let her lyricism shine through.

Amy sings about wanting to fit into someone's life effortlessly. She includes metaphors like "I wanna be a pot on your stove" to emphasize how she's craving a mundane, stable kind of relationship. One that's reliably there. In the second verse, she continues with, "I wanna be the poem you know/When you're drunk in the street" which further brings to life this kind of romance she craves with a directly poetic image. The lyrics and the sound blend together to make this desired relationship feel worn in and grounded, and the bridge and final chorus release a tempered euphoria at actually finding each other in time and reuniting.

Releasing the track and playing Outside Lands in San Fransisco all in the same day, Amy is proving beyond a doubt that her star is only continuing to rise with every new track that clarifies her artistic voice further. I can't wait to hear a full project from Amy and hopefully get to see her on a headline tour one day.

Getting to Know Maisyn (Feature)