"Therapist" by Jeremy Zucker and "Older" by Alec Benjamin: A Weekend Music Recap 9/19 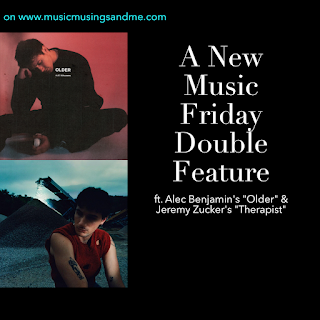 This Friday, there were two great new songs that I stumbled into, and I couldn't decide which to cover, so you're getting a double feature recap of song reviews. I've been a fan of Jeremy Zucker's for a couple months now, and I was excited to see the announcement of his album CRUSHER and a new single, "Therapist", to go with it. Later, I heard about Alec Benjamin releasing a new song called "Older", and when one of my friends on Twitter said it was giving them a growing up existential crisis, I knew I had to give it a listen immediately. In the first 20 seconds, I was on the edge of tears. Growing up freak out songs are always top tier.

While "Water Fountain", "Let Me Down Slowly", and "Mind is a Prison" have all lived on various playlists of mine, Alec Benjamin has just never been an artist I've thought to keep up with. His music generally comes as a random gift from the Spotify algorithm's understanding of my love of depressed pop. "Older" got handed to me as well in a slightly different fashion- first through an email and then with a reminder from Twitter.

In a jam packed 2:44, Alec tells the story of the exact disaster of young adulthood that I am experiencing in a quick, breathy, rambly list of scenes relating the end of childhood, the start of adulthood, and the circular nature of life. In the first verse, he signs an apartment lease and moves out ending the verse with, "I can't go back to the start now/Time doesn't slow down/I'm on my own". And it seems so simple, but it's the same terrifying thought pattern I've been looping since mid-August.

The chorus comes out more as a panicked burst than a part of a song and uses such simplistic imagery to an absolutely crushing effect. "Guess my childhood is over/Now I'm taking down all my posters/And I'm putting all my things inside a box next to a poster/I'm not ready to get older, I'm not ready to get older," he sings. The last few bars sound nearly pleading. As someone who has quite the poster collection and a large amount of sentimentality around them, that particular line struck my core. He comes back to reference them again in the bridge where he zooms forward and imagines a life where he has kids facing the same thing that he is, "One day I'll be buying posters/For my kids just like my parents did for me, it's never over/They'll grow up and soon enough they'll wish that time would just move slower". It's always striking how cyclical life is when you frame it like that.

This song was almost guaranteed to grab hold of me. It goes on the list with "Little League" by Conan Gray and "Never Grow Up" by Taylor Swift as songs that stare right in the face of one of the scariest junctures in life. I would love an album from anyone of pure How Do You Adult Why Am I Not A Kid Anymore panic.

The thing that first intrigued me about Jeremy Zucker when I shuffled his most recent album, Love Is Not Dying, is that he created an entire soundscaped cinematic universe where each song effortlessly gelled into the next. It was familiar, and his lyrics had similarities to Alexander 23 (the reason I found Jeremy in the first place), but his ability to world build truly set him apart. Now on October 1, his next album, CRUSHER, is set to release.

After following singles "18" and "HONEST", I've only become more intrigued, and "Therapist" has come along to continue the narrative. Jeremy has already talked about how CRUSHER is a continuation of many of the relationship stories on Love Is Not Dying, and it's deeply apparent on "Therapist" as he works through the next chapter of this toxic relationship.

In the first verse, he paints a picture of his ex, always on the brink of disaster. Every time she starts to go down hill, he jumps into action to come to her aid, even if it means flying across the country. He sings about being in over his head and lost about how to handle a situation that has grown so far beyond him, and he also questions why he keeps engaging as he sings, "And you know I can't handle this/Maybe I'm just a masochist". The incredibly codependent relationship is further developed in the second verse as Jeremy tries to put some distance between them, "I do my best to stay away/Cause I can't save you every day/I'm waiting for the hurricane/You're spinning out and I'm in the eye/Dying inside". In the chorus, he finally comes to the conclusion that maybe it's her therapist that she needs in these crisis moments, not him.

In only 2.5 minutes, the song blooms into a confused, loud, frustrated track left to question his responsibility to this person he still deeply cares for. I always appreciate Jeremy's stark realizations in his choruses and use of simple language claw at your heart strings in quick bursts of song. While CRUSHER is shaping up to have less of a blurry effect than Love Is Not Dying, the narrative of the album is already starting to take shape.

What Era Are We Even In?? Taylor Swift Drops "Wildest Dreams TV"