Dylan Dabbles in Pop Punk with "Someone Else" 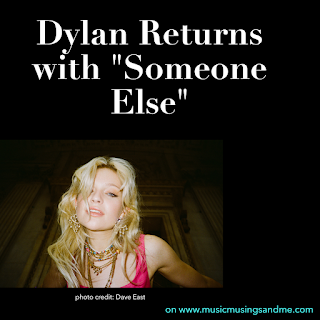 Dylan has begun to make a name for herself uploading her explosive choruses to TikTok for fans to use as sounds while making them wait patiently for the full track. Luckily, fans didn't have to wait nearly as long for "Someone Else" as they did for "Nineteen", but the payoff was still equally satisfying. On this new track, Dylan moves from indie movie soundtrack vibes to a pop-punk sensibility that brings her much more in line with artists like Yungblud, who she opened for a few months ago in the UK.

While the shouty chorus, that is reminiscent of songs like "Good 4 U" that are dominating the radio airwaves, was the focus of all the teasers, I find myself returning to the track for the first verse that gets interpolated into the bridge and the breathy, dark, climbing prechorus that leads into the cathartic bursting bubble of the chorus. The song proves to be incredibly dynamic and slides through so many emotional zones. For fans who enjoyed Dylan's last single "Nineteen", she keeps up her style of incredibly visceral imagery that builds the picture of a love interest and later a magical night that only adds to her frustration in the chorus.
"Your devil smile, deep hazel eyes," she starts the song. This love interest's dreamy eyes become an anchor of sorts in the song as its the image that your mind keeps returning to. The prechorus builds up the why of the song and how she got so invested in the first place. It has my favorite lyrics of the entire song. "Overthinking, lucid dreaming/Lipstick stains upon the ceiling/Out of my league, over reaching." she sings in an incredibly lush tone like she's savoring the memory. Lucid dreaming is a concept that I find utterly fascinating, so to use that incredibly rich concept as an emotional touch point in the song is incredibly powerful.
The song seems to be building the perfect indie movie moment, much like "Nineteen", until the story takes a turn in the chorus, and you start to realize that the song is really move of a pop-punk "You Belong With Me" than a glittery "Teenage Dream". In the repeated hook, Dylan laments, "Cos I love you and you love someone else". I think it's a sentiment that everyone can relate to or has distinct memories that still linger of that feeling. We've all been the second choice, and there are few things that sting in that particularly painful way. This realization empowers the bridge as she doubles down on the heart shredding feeling of watching the person she loves fall for another girl. Her tone is so perfectly soft and fragile as she sings, "Her pretty smile/her ocean eyes/Driving you wild/Still fantasize that you are mine/Your devil smile, deep hazel eyes". I love how she repeats the lyrics from her fantasy in the verse to pop the bubble at the end of the song. Also, maybe it's just me, but for some reason the phrase "ocean eyes" which has been around forever, but now it is permanently etched in my brain as a Billie Eilish reference.
Behind it's roar, "Someone Else" proves to be an incredibly vulnerable song about the confusing realities of unrequited love. Dylan spoke about how the development of the song probably leant it that unique character, "The song started way sadder than it is now, and slowly the inner disbelief and anger seemed to take over the lyrics.” Sometimes, you want to wallow in your feels (try "Heather" by Conan Gray for that), but often, it works better to just get angry. Dylan offers the perfect soundtrack to pull you into the next stage of grief. Cathartic and well crafted, "Someone Else" deserves a spot on your playlist.
Artists of the week DYLAN Favorite Lyrics my playlist Singles Song Reviews What's In my Earbuds