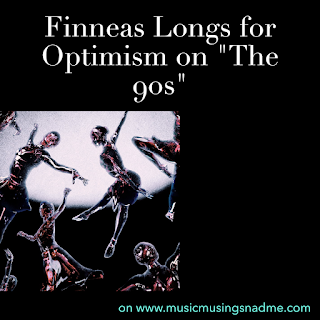 If you've read the blog for long enough, you already know Finneas is one of my favorite writers and producers, so I'm always excited to hear new work from him. This morning, right as I was rushing to class, Finneas released his brand new song "The 90s" which finds its home as track 5 on Optimist, Finneas's sophomore album releasing October 15.

On the track, Finneas reflects back on a world before the internet and the complications it brought. He clings to a willingly over-romanticized, inaccessible past for the sake of basking in a lost sense of hope in the verses while reflecting on how truly fleeting time and our lives are in the chorus. Though masked by the heavy modification and computerization on the vocals and more electronic, plastic production than typical for his music, this song is truly an authentically panicked realization that time only moves forward and that growing up is terrifying. Though I prefer Finneas's more organic productions, I do appreciate that these augmentations work to further paint a contrast between the present reality and its barriers and the analog world that he longs for.

Like in his sister Billie's music, this song comes with the looming awareness of celebrity and some of its more unfortunate elements. In the first verse, Finneas laments the hyper-accessibility of public figures through the internet. He specifically mentions how easily obsessed fans found his parents' address as Billie rose to fame. The family home ends up playing a central role in the song, and he uses it as a vehicle to convey some of his sadnesses and anxieties about taking another big step towards fully leaving childhood behind.

The song seems to be a farewell of sorts to the true young adult part of his life that so heavily took place there as he sings, "Feels so foreign, I'm already home/When your heart starts to harden/Lay your guard down in your garden/Same backyard, but we are not home". It does cast light on a very strange juncture of a more permanent adult life- when the place you're living starts to feel more like home than your parents' house, even if it's just down the road. In 2019, Finneas bought a home with his girlfriend, Claudia Sulewski, and started primarily working out of the studio he built there instead of the childhood bedroom Billie's first album was crafted in. There's an element of fame prematurely forcing the issue, but it's just another reminder that as we get older, we walk through so many doors we'll never go back through.

Each of the songs he's released for the album so far have played on the idea of optimism in different ways. On "A Concert Six Months From Now", he's hopelessly optimistic about mending a relationship with an ex, "What They'll Say About Us" delves into an optimism in new life and a lasting legacy even in a tragic situation, and "The 90s" takes a position of jealousy and longing for a world that was able to be more unbridledly optimistic than now. Instead of feeling a constant shadow of impending doom ("We're only the counting down the time that's left"), there was a real excitement for the future then- a distinct feeling of possibility, at least in the popular imagination.

Still, there is hope for the present moment. Even with the complications of the internet, climate change, and COVID, Finneas does come to an important realization for making the most of the time he has. "All the time I should've been so happy I was here/Wasting it on worrying, just made it disappear," Finneas sings in the chorus. Living in the moment is the only way to truly fight back against how fleeting all of our lives are and not letting the disasters all around us become all consuming is the only way to try to retain some of that joy that he longs for from past eras. Even feeling utterly out of control, there's still power in framing and outlook and how you choose to approach your life.

The 90s are gone and there's no going back, but what you choose to do tomorrow is still in your hands.

What They'll Say About Us Review