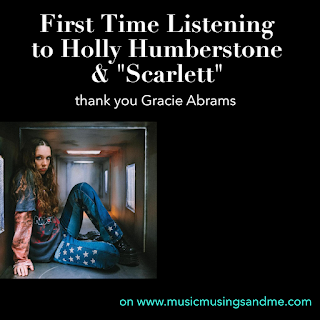 The other night, I was clicking through Instagram when I paused on Gracie Abram's story congratulating her friend, Holly Humberstone, on the release of her new song "Scarlett". Since Gracie is one of my favorite singer-songwriters of the moment, I decided to look Holly up in the hopes that they made similar music.

Luckily, my hunch was right. "Scarlett" is confessional, conversational, and emotionally raw while carrying an electrifying melodic swing and dynamic track. With a bit of the bittersweet elation similar to Dylan's "Nineteen", Holly keeps up the trend of incredible new songs from British pop girls.

The opening verse starts with a quiet plea for honesty at the end of a dying relationship. She starts with a bit of dialogue, "You said, 'Darling, will we got the distance?'/It's such blissful ignorance". I was immediately captured by these two lines and the way she spells out the demise of the relationship so simply. The verse closes with, "And hate me- if you're gonna hate me/But just say is plainly with everything lately/I just need the truth". I love how her simple word choice works to build an even more heartbreaking picture of someone who is so far at the end of her rope with the relationship. She definitely shares in Gracie's gift for profound simplicity.

The main line that has stuck in my head and sold me on the song comes in the prechorus. She sings, "We go together like bad British weather/And the one day I made plans," with the most fun wink at the end while the instrumental gets super breezy and fun, contrasting with the end of the relationship. You can almost tell she's moving on even as she's dwelling in the final days with this person. I love the comparison to the weather and the very specific disappointment of plans getting cancelled at the last minute. It's such an obvious comparison, but it struck me in the same way that Fletcher's "Bitter" created an utter fascination with the related disappointments she drew together.

The second verse follows a similar structure as the first, except this time Holly is asking if the relationship will go the distance, and her partner seems less than committed. She relates the crumbling of that conversation, "As I stood there, pouring out my heart with you completely unfazed". The partner at one point even calls Holly a "emotional grim reaper" in a particularly rude and biting moment.

As the chorus laps a few times, the listener and Holly build strength in finally moving on and shedding the skin of painful, difficult relationship. This song is perfect for skipping down the street in the fall wearing a chunky knit scarf while the leaves turn. Since fall isn't really a thing here in LA, I won't be doing that, but hopefully someone will.

Also, in the process of making this article, I realized that I'd previously liked one of Holly's songs on Spotify called "Vanilla" a while ago. I've recently fallen into the Stairwell Version of that song, probably because at one point she sings, "I need a cure for all this apathy/I'm spending way too long on Web MD/Not so sure it's good for me, but/I guess I feel a little nauseous" because that is far too relatable. I'm so excited that I've found out about Holly Humberstone and her music, and I'm looking forward to hearing her new EP Walls Are Way Too Thin on November 5th!

Reviewing Maisie Peter's Debut Album You Signed Up For This