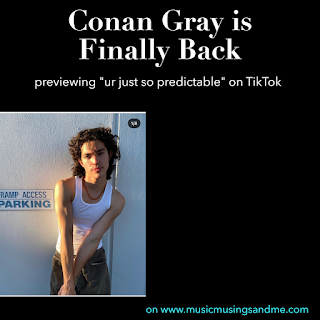 Conan Gray seems to be establishing a pattern of releasing a new single every two months or so in 2021. While I would love to hear about what album these tracks may or may not be connected to, I won't complain about any way we get new music. As with "People Watching", the dawn of Conan's new song, tentatively titled "ur just so predictable", has begun as a TikTok audio teaser.

Despite my frustration with music marketing's reliance on TikTok these days, I do have to admit it was thrilling to be surprised by a brand new song out of the blue in what I suspected would be a totally normal TikTok. As I started watching the video, it took me a minute to realize that it was even Conan singing the track. At first, I assumed it was some wildly popular TikTok audio trend that I had missed as one of the few 18 year olds who thoroughly does not understand the appeal of that app. Unlike the first verse of "People Watching" that he originally shared, this song is clearly an upbeat pop track with a bit of an '80s, Future Nostalgia tinge to the production. Speculation is swirling that the song might have even been produced with Ryan Tedder, who Conan has spent time in the studio with in the last year. Tedder has been a big fan of the revival of this sound that has taken over pop in the last year, so I wouldn't be surprised.

Set to a visual of Conan dancing around his bathroom, brushing his teeth, this chorus seems to have major TikTok potential in the same way that "Maniac", the first single to launch him into the public consciousness, did. Thematically, from what I can tell, a cross between his songs "Wish You Were Sober" and "The Cut That Always Bleeds", Conan seems to have built up some emotional immunity to this love interest's games finally. "You still tell yourself that you hate my guts/Now you're back in love/You're so predictable/Won't you, try something original/Old news, reused/That's why I don't cry," Conan sings in the pre-chorus before launching his hairband in the camera during the video. "Cause I have a feeling, you're coming back/Just like you did in the past," teases the beginning of an elated chorus. It's already electric, and the euphoria feels more than earned as Conan finally seems to be coming out on the other side of a toxic relationship that has followed him through songs like "Checkmate," "Wish You Were Sober," "The Cut That Always Bleeds," "Fake," "Heather," and probably more that I'm forgetting.

While "Overdrive", Conan's first upbeat song of the year, delivered on movie soundtrack feels it lacked Conan's distinctive storytelling ability and was clogged with six writers. His next two offerings, "Astronomy" and "People Watching", really honed in on that missing story aspect and kept a smaller circle, writing with just one or two (excellent) co-writers. I'm hoping that whatever "ur just so predictable" turns into will be the perfect marriage of pop and storytelling as Conan has done so well in the past on Kid Krow and Sunset Season.

It would be lovely if this is finally the song that makes the way for the rest of the album length project, but at this point, I'm not holding my breath. Maybe it'll come when he finally gets another viral TikTok hit to follow up "Heather". "Wish You Were Sober", surprisingly, seems to be heating up on the platform despite being out for a year and a half. Kids are mostly using the sound to lament their parents' issues with alcohol. Conan thrives most on TikTok through organically occurring hits, and I hope his team has realized after the million videos of "People Watching" that it simply cannot be forced. While I don't understand the music industry's sudden marriage to the app in governing all decisions, I hope Conan will have his chance to thrive there yet again to hopefully open a few more doors for new projects.

I have no clue when to tell you to expect this song. The wait for "People Watching" stretched a month long from the first teaser, and Conan hasn't even acknowledged this clip on any other social platforms yet. I'm hoping that this song won't get as overplayed through TikTok as "People Watching" did, but only time will tell. My personal theory is that the "ur just so predictable" teaser dropped now to create some buzz before he debuts it live at the iHeart daytime festival stage in Las Vegas this Saturday. He has a long history of playing tracks before they're released on tour, and I'm hoping we'll get a bit of that back on his first proper return to the stage since the pandemic began.

Conan Gray's Astronomy Music Video Is Quite the Journey