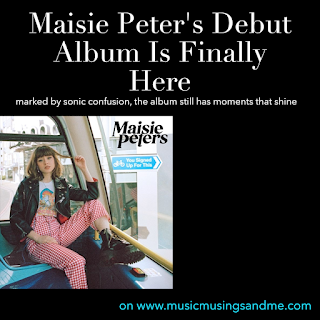 After four long years of work, Maisie Peters rolled out her debut album, You Signed Up For This, on Friday. This release made me realize that I've followed Maisie all through those last four years of work. I've kept up with her music for so long that I can't even remember how I found her. She's been a fixture on my playlists ever since for her soft, acoustic tracks with extremely thoughtful lyrics that put a uniquely microscopic lens on falling in and out of love and growing up. With Maisie having just recently turned 21, I've gotten to grow up with her, and I enjoy how she always talks about life squarely from the point of young adulthood she's currently at.

Outside of her debut album, Maisie's had an incredibly packed year. She started 2021 by releasing a flurry of singles that eventually lead to the album. She also released essentially an album's worth of tracks for the Trying: Season 2 soundtrack she was tasked with creating. Finally, Maisie made a switch in home bases as she signed to Ed Sheeran's fledgling label, Gingerbread Man Records. While the soundtrack kept her affinity for understated, organically instrumental productions that let the lyrics take center stage, You Signed Up For This takes Maisie's music in a new direction that is soaringly successful at times and slightly confused in others.

If you've never listened to Maisie's music, her sound and style always fell in the avenue between a Red era Taylor Swift and Ed Sheeran. Interestingly, her evolution of sound with this new album seems to cling to Ed's latest ideas about the sudden need for constant change in pop music. After jarring everyone with "Bad Habits" and the terrifying accompanying music video- which would've been a fine song for the Weekend but was an extremely poor fit for Ed- he released the sentimental, guitar-led "Visiting Hours" that returned to true Sheeran form. Maisie waffles on You Signed Up For This between attempting to awkwardly and unnecessarily break the mold, a la "Bad Habits", and letting herself shine with more evolved versions of what she does best.

Unlike Ed, though, even in her more experimental, Top 40 moments, she never loses her gift for lyricism. Her lyrics always read like beautiful poems, and her acoustic live versions she's posted to YouTube always put the songs that stumble in a better light. I'm also by no means suggesting that Maisie can't gracefully create a pop song. Like Sheeran found soaring success with "Shape of You", Maisie's released a number of great pop songs that feel honest to her as an artist like "This Is On You" on her last EP and "John Hughes Movie" on this album.

Unfortunately, there are too many tracks that are full of potential that are weighed down by poorly shoehorned production. Songs like "Psycho" and "You Signed Up For This" wedge in awkwardly upbeat drum tracks that seem slapped on to these songs after the fact. Too often, these lyrics feel utterly divorced from the production and end up creating an oddly Frankenstein-like song. I struggle to listen to the album all the way through because of these ill fitting costume songs that don't create moments of growth but just feel out of place on Maisie.

The album does have some wonderful, shining moments, though. "Outdoor Pool" is one of my new favorite songs of all time as Maisie dives into the painful reality of falling in love as a young teen. In all the aching, tiny details she tells the story of being 15 and falling in love with a boy who will kiss you in secret but won't be seen in public with you. When he starts dating another girl, all the confusion and devastation bubbles up, and it becomes clear how she would've done anything for a boy who was entirely not worth it. She so accurately gets at all the messy emotions from those situations with the added benefit of six years of reflection and the knowledge that the boy wasn't worth much after all.

As far as more upbeat tracks, Maisie succeeds with "Elvis Song" and "I'm Trying (Not Friends)". While it took me a second to get past how much the production on "I'm Trying (Not Friends)" reminds me of the Cups song, I love the melodies in the chorus and the lyrics that detail the difficulties of trying to be friends with someone you secretly love. The lyrical density definitely rivals some packed Ed Sheeran tracks. On "Elvis Song", Maisie brings back the movie soundtrack vibes she expertly achieved on "John Hughes Movie" to flood us all with a nostalgic whirlwind of flashbacks as she relives a failed relationship in the most beautiful, fragile details. This song might be one of the most quintessentially Maisie songs on the album, and if you love "Nineteen" by Dylan, you're going to love this song.

The last standout on the album for me is "Talking to Strangers", an acoustic guitar-led track where Maisie admits that she loves this person so much that she ends up telling random strangers little facts about him in conversation. We know about her seat-mate on the plane who knows her love interest is scared of flying and the girl who swims laps at the pool who knows this person learned to swim in Hawaii. It's been well established that humans have a hard time not constantly running their mouths about people they like, so this is an incredibly sweet and inventive framing for a love song. It showcases what Maisie often does best- telling us about an emotion we all have heard about a million times in a way that seems brand new.

I still find myself on awkward footing with this album. I didn't particularly love any of the singles outside of "John Hughes Move", which led me to go into the album with an already skeptical tint to my glasses that conflicted with my overwhelming want to love every second of Maisie's debut album. I just simply don't. Every song is full of potential, but even with repeat listens, I continue to struggle with the production choices on many of the songs. To me, some of these tracks just have too many fingerprints of outside influences and external pressures to conform to a more traditional pop sound with less infusion of the singer-songwriter charm that drew me to Maisie. Mostly, with You Signed Up For This, I'm trying to remind myself that I don't have to wholeheartedly love the record from top to bottom to cherish the individual songs that left an impact.

August Preview: Not to Miss Songs