Lorde Speaks To Our Chronic Numbness on "Mood Ring" 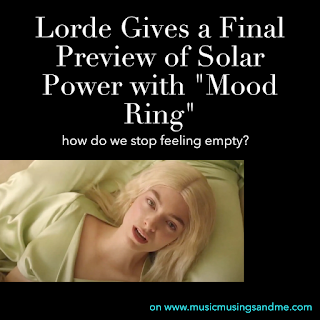 On her new single "Mood Ring," Lorde examines the lengths we go to just to feel something. With the general echoes of numb hopelessness through the last two years of the pandemic, the song could not be more timely. She masterfully articulates the pain of and confusion of simply not knowing how to feel and the whispers of sadness and a sensation of being left behind that often come with it.

Though the song's high harmonies and cheerful beat from the drums and guitar keep the song moving along like a summer skip through the park, Lorde finds herself entirely disconnected as she wanders through the song. In the chorus, she laments, "I can't feel a thing/I keep looking at my mood ring/Tell me how I'm feeling." This adds to the frustration around the dark mood she can't shake in the first verse. Even though all of her "oceans have riptides," she can't seem to find the source of what's causing her problems, much like she can't actually gauge her mood in the chorus. Emotions that are confusing and unshakable are always the most cloying. In the pre-chorus and verses, she sings about ways she's trying to solve her predicament through healing practices, yoga, crystals, vitamins- anything she can get her hands on that might help.

Lorde sings about a generational effort to find ways to feel and be better. Often, these attempts are fruitless, and Lorde seems to find a tug of war between attempting to heal yourself and seeing some irony in the way people approach these different practices. These people seem like ridiculous caricatures as you dive into many wellness culture rooted spaces, but it's hard to begrudge people for trying. The song makes a good point at illustrating how the wellness industry has some much leeway to become unfortunately predatory as people seek to find deeper meaning anywhere. Ultimately, though, we're all just looking for a remedy, or at least a distracting salve. In the second verse, she sings about wanting to "get well from the inside," another journey that Gen Z and those on the cusp seem hyper aware of.

It wouldn't be a Lorde song without a couple lines that sting a bit too much or require a couple seconds of vacant blinking in awe. In the first verse, Lorde slides in, "Don't you think the early 2000s feel so far away?" which is a thought I have quite frequently before trying to ignore how that makes me feel. Even though I was born around that time and don't really remember much of those early ears, it still increasingly scares me the farther it seems in the rearview.

She also pulls out a reflective moment towards the end of the song as she sings, "Take me to some kind of place/Anywhere/Watch the sun set, look back on my life/I just want to know, will it be all right?" It's a haunting place to end the track but gets directly to the root of why emptiness is so deeply annoying and how frustrating the human, permanent state of uncertainty is. These lines tie this new song directly back to its predecessor, "Stoned at the Nail Salon".

With each of the three singles on Solar Power, Lorde has introduced us to three distinct flavors on the 12 track album. The lead single, "Solar Power," forced us all to step into the sun and skip down the beach. "Stoned at the Nail Salon" cast a somber, sentimental glow that appeals to the childhood nostalgia Lorde does so well. "Mood Ring" manages to combine existential musings and smiley sonics. Tied together with similar threads of ethereal harmonies and breezy, gentle energy, so far, Solar Power proves to be a sonically diverse yet cohesive album. I can't wait to hear the rest of the tracks on Thursday night.