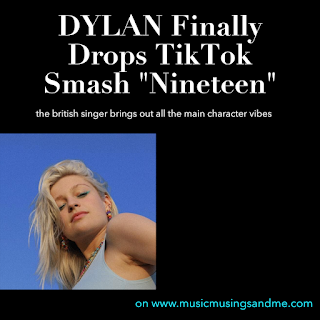 After many months of teasing on TikTok, Dylan has finally released her much awaited single "Nineteen", days after opening for YUNGBLUD in the UK. The full song is every bit as much of a movie montage dream as the explosive chorus she's been previewing. She perfectly captures the high of infatuated new love with all the sugar and none of the bitter aftertaste.

With the complete rise and fall of this epic love story, Dylan keeps up a high energy production that never fails to make me want to dance even though I might have actually heard the chorus a million times at this point. This song the pinnacle of the main character vibes that TikTok is always after. What starts as a quiet, nearly lullaby-like track in the first verse as she describes first connecting with this person who feels straight out of a movie, blooms into an explosive, high energy chorus full of nostalgia for this whirlwind romance.

"Do you remember my blue dress, hot mess/Coffee and the cigarettes," Dylan sings at the start of the chorus as she uses a flip book of images to take us all back in time with her. Later in the chorus she details the irresponsible late nights that they fell into to escape the reality of their lives together. The whole song is very manic pixie dream girl in the best way possible. This romanticized version of being nineteen captures the undercurrent of possibility that's so often associated with being young.

Even in this perfect world, the song is retrospective, so Dylan is already well aware of how the story ends. As anyone could guess, this volcanic love does ultimately fizzle out, and she lets us in on that in the bridge. "Loving young is such a waste," she laments, "hearts are bruised/mistakes are made." Dylan gets to the heart of my biggest fears about experiencing life young. Everything is so temporary, and your first love is so rarely your forever that sometimes it feels pointless to really invest in someone. She has an answer to those fears as well, confirming at the end of the bridge, "I would do it all the same." When she launches back into the final chorus, it's slightly slower, and her voice echoes alone before the fireworks of production kick back in. It accents the way that the end of the relationship proved to be a speed bump, but looking back, there's still more fondness for that time than anything.

This single from Dylan has caught and kept my attention better than any song I've seen flash across my TikTok page, and "Nineteen" seems to be the start of a new and exciting era for her, so I can't wait to see what projects might come in the future.

Messages from the Vault: Decoding the RED (TV) Tracklist

August Pop Preview: Not to be Missed Records