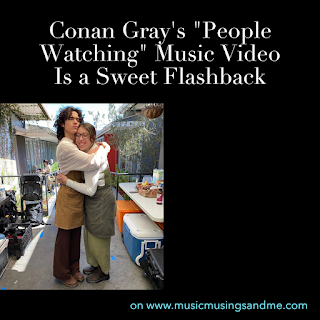 After "People Watching"'s unconventional release, fans of Conan Gray had another exciting moment to look forward to with the release of the official music video Friday morning. Fans had already started forming theories about what the video would be like in the days leading up to the release. After seeing the Cafe Gray themed merch (including a coffee mug) and Conan's more frequent than usual posts about his excessive coffee consumption, the running theory came to be that the video would fulfill Conan's long running dream of becoming a barista.

That proved to be true, with an extra fun twist for longtime fans. Minutes before the video premiere, Conan tweeted, "y'all r gonna recognize someone in the video ;)" and later gave an extra hint in the YouTube live comments that the "ogs" would recognize this person. I started to get my hopes up it might be his longtime best friend, Ashely, who frequently appeared in his YouTube videos but I couldn't imagine it actually happening. Turns out, that hunch was correct, and Ashely became a trending topic on Twitter before Conan even started trending for his own video.

The video itself involves plenty of being a bad barista (on Conan's part) and staring longingly at happy couples hanging out at the cafe, per the theme of the song. Conan has talked about how the first verse of "People Watching" was entirely inspired by a couple he used to eavesdrop on while he sat at cafes editing in college.

The opening scene shows Conan getting ready for work, tying his apron and removing his wireless Beats headphones, which signals the song to begin. I have to admire the monopoly Beats has on music video product placement. With a deep breath, he walks into the front of the cafe to begin work. It's in that shot when we first see Ashely, who co-stars as the second barista at Boulangerie Patisserie. That's the moment when Twitter collectively lost its mind.

We get to meet the group of happy couples to be jealous of as Conan distractedly completes barista tasks including grinding coffee beans, poorly wiping off tables, and burning croissants. The first couple seems to be the one at the heart of the song. They're holding hands and doing (presumably) their metaphysical philosophy homework, and her sparkly diamond ring flashes on the line "she wears a ring but they tell people that they're not engaged". The next couple is older with grey hair and big smiles. The man leans forward and plants an affectionate kiss on his wife's hand, representing a sort of enduring love. Next, he almost walks into a pair of girls who he later longingly stares after as the girl in the beanie cups the girl with the colorful hair's cheek. This feels like a callback to the "Crush Culture" music video where the lesbians are the only couple allowed to continue their date peacefully. A fitting parallel for the anti anti "Crush Culture" song.

As the video goes on, we're reminded of the croissant Conan put in the toaster at the start of the video as it gets darker and darker. Eventually, smoke starts to fill the room and everything gets hazy and slow to match the complete shift in the song. He falls to the floor, shattering a cup of coffee as the smoke inhalation gets the better of him.

When the song ends, everything goes black, and then we get the end scene, which is definitely the best part of the entire video. In the darkness, we hear Ashely's voice earnestly repeat, "Conan, Conan!". Then the camera flashes back to life as she set the burnt croissant in front of him. She gives him a stern look and rolls her eyes, which Conan tries to smile at her before she storms away. He starts to realize the disaster he's caused as the camera pans to all the couples staring him down disapprovingly as the fire alarm beeps in the background. The girl in the beanie fights hard not to laugh at him. And then the video ends.

I could not think of a better video for an already excellent song, and involving Ashely made for a cute treat for fans. The Ash n Cone Cooking Show was one of the most beloved segments from Conan's YouTube days (go watch the brownies or cinnamon rolls episodes now), and seeing this so many years later just feels full circle since Ashely was such a huge part of Conan's early career and fandom. Also, this is the second music video Ashely's been involved in as she filmed the "Idle Town" music video- the video that lead to Conan's initial rise to fame.

If you want to hear more of my thoughts on "People Watching", the song, check out my YouTube video reacting to the song and analyzing all the lyrics.

The Astronomy Music Video Is Quite the Journey

The Overdrive Music Video Is the Relatable Escapism We All Need