Billie Eilish Gets Honest About Fame and Career In "NDA" 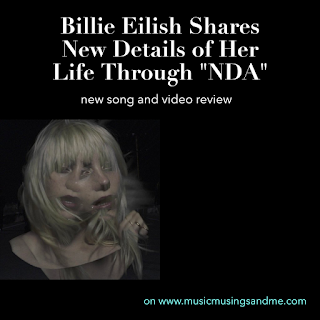 Billie Eilish has given me a song on my birthday. And, funnily enough, she delivered my favorite song on the Happier Than Ever album so far. For the fans on Twitter who I've seen fretting about how much Billie has changed- both her sound and her look- I would say this is a sign not to worry. Everyone will likely find the part of the album that suits their taste, even if this doesn't turn out to be a skipless album for all fans. "NDA" takes a turn away from the sultry, smooth jazz and 1920s vibes that cover so many of the new tracks and videos for this era.

It's probably most similar to "Therefore I Am" of all the singles so far, but while "Therefore I Am" is pretty straight up pop, "NDA" plays with the darker, creepier sonic motifs all over When We All Fall Asleep Where Do We Go?. From the creepy, crawly, haunted sounds all over the production to the vocoders and low mumble of her singing voice to the video that leans closer to her normal horror vibes than most of her recent video where cars and shadowy men swarm Billie, she proves that elements of her past will always be with her. This is a bit of a surprise because this album cycle she has worked hard to assert to both fans and the general public that she's allowed to grow and change, like with her recent Vogue cover shoot.

Lyrically, Billie is more honest and revealing than most of the more metaphorical or just lyrically general songs we've heard about overarching themes. The song consists mostly of two long verses and a lengthy outro interspersed with a two line chorus. This sends a clear message that "NDA" is here to communicate a message- and rather bluntly at that.

In the first verse, Billie sets up the landscape of the story and fills fans in on many highly speculated details from her personal life. She sings about having to spend her money on security because she has stalkers. Finneas has extensively talked about the fence and cameras he's had to install to protect the house after multiple scares he's had, so it's not surprising that Billie also deals with this issue on a much larger scale. While many famous people contend with stalkers, she particularly notes that this person "Says he's Satan and he'd like to meet me". This feels like her way of addressing the more extreme ends of the backlash to her debut album, which many people callously labeled as satanic or part of the occult.

Billie then goes on to reveal another detail that fans have wondered about for a while. For most of her career, Billie has famously lived with her parents in the same house she grew up in. Even after becoming a legal adult, she continued to keep up the facade that she still lived with them. Only recently, Rolling Stone broke the news that Billie did move out a while ago, as she puts it. In the song, she clarifies that it's been two years singing, "I bought a house when I was seventeen". She wraps the verse with ending the story she starts in the first line talking about how she brought a "pretty boy" over and then sent him home with an NDA after just one night together. She states that she couldn't afford to let him stay longer and learn her secrets.

The second verse is focused inwards as Billie picks apart the aspects she hates about her career and her thoughts on leaving it all behind. This is also consistent with what she expressed in the Rolling Stone article where she seemed mixed on whether she liked songwriting or being a musician much at all. "Thirty under thirty for another year/I can barely go outside, I think I hate it here," she laments. Billie, especially in interviews, always tows a line between total honesty and coming off as ungrateful for what she has. This song means to drive home the negative aspects of fame, so these statements come off better. She continues down her line of thought and decides it would be best for her if she could disappear in Hawaii. At the end, she also brings up how much she enjoys getting older. This seems to be a way to juxtapose her frustrations with her lack of freedom. Her fame limits what she can do, but getting older also expands those bounds. My favorite line from this section is "I thought about my future, but I want it now".

In the outro, things start to fall apart. Billie turns away from her inward exploration and back to this relationship that the NDA is about. She seems to sing about abuse and the person revealing who they were underneath after the giddiness of a new relationship wore off. "You hit me so hard/I think I saw stars," she sings. "How'd it get so dark?" she wonders in an agonized tone far different from the low talking that dominates the verses. While there are hints of the relationship souring throughout the song, this section could also be a reference to the career that she's so mixed up about because fame did seem to hit her hard. Here her voice expands to really sing, and it showcases the full depth of her emotions. They're echoey and confused and expansive like she's shouting into an empty desert. This also proves to be a contrast to the over-processed, modified, robotic-pop effect on her vocals in the chorus.

"NDA" has me more intrigued to listen to the rest of the album when it comes out on July 30th. Billie had presented such a clear, united sound and image for the album (outside of "Therefore I Am") that this new sonic curveball is even more intriguing. It offers the hope of even more sonic diversity sprinkled in the 11 unheard tracks.

My Thoughts on the Billie Eilish Virtual Experience